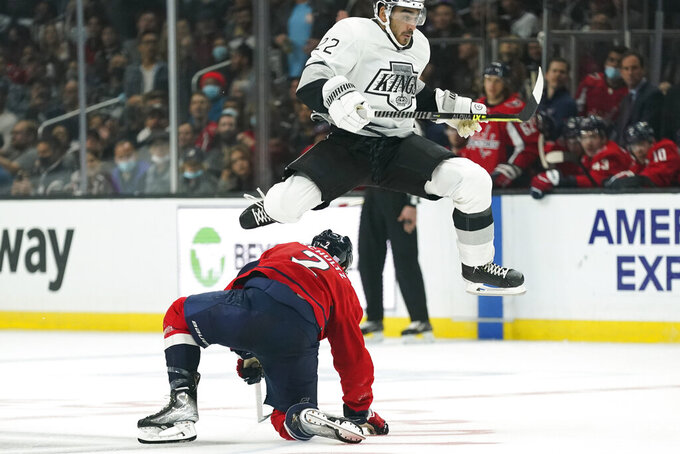 The Capitals extended their point streak to six (5-0-1) with the win. They are tied with the Florida Panthers for the most points in the NHL with 25.

The game was scoreless until there was 3:30 remaining, when John Carlson caught Jonathan Quick playing out of position and flipped a pass to Hathaway, who was able to put it into the net.

“Tonight, what a play by Kuzy (Evgeny Kuznetsov) to John, and that’s something we’ve been talking about, trying to get layers of the net but also finding a backdoor presence as well. And John is a skill player, so I just had to stand there and put my stick on the ice,” Hathaway said.

Hathaway then added an empty-net goal with 1:18 left. He has five goals on the season and six points in the last four games.

“I thought he was playing good hockey, but with the amount of offense that is out of the lineup right now, to have him contributing the way he is is really, really important," Capitals coach Peter Laviolette said of Hathaway. "He skates well, he handles the puck well. Shoots it hard. He goes to the net, he goes to the hard areas. There’s no reason why he shouldn’t score goals, so it’s nice to see him get rewarded.”

Ilya Samsonov made 34 saves for his second shutout this season and fifth of his career.

Los Angeles had a pair of scoring chances in the second but came away empty. Samsanov made a sprawling save on a wrist shot by Trevor Moore seven minutes into the period. He then made a pad save on Matt Roy's shot from the point and two subsequent rebound chances by Moore late in the period.

Quick, who stopped 36 shots, had a four-game winning streak snapped. It is the second time the Kings, 7-0-1 during their streak, have been shut out this season.

“We’re not gonna go sit in the corner and suck our thumb over this one. You know, we did some good stuff," Kings forward Anze Kopitar said. "We’re certainly not satisfied with the outcome, but there’s parts of the game that I think were pretty good today. So we’ll build on that and take the next step.”

Washington's best opportunities before Hathaway's first goal came on a pair of one-timers by Alexander Ovechkin from the faceoff circle on power plays during the second and third periods that Quick was able to stop.

ONE STREAK AFTER ANOTHER

The Capitals were the seventh team in league history and the first since Montreal in 2016 to face two different teams on consecutive days with point streaks of eight games or more. Anaheim won in overtime 3-2 on Tuesday to extend its win streak to eight.

Samsonov has a 34-10-4 career record in the NHL, including 22-3-2 record on the road. Since the start of the 2019-20 season, Samsonov’s 22 road wins are tied for sixth in the NHL and the most among goaltenders with 30 or fewer road games played.

Capitals: At San Jose on Saturday.