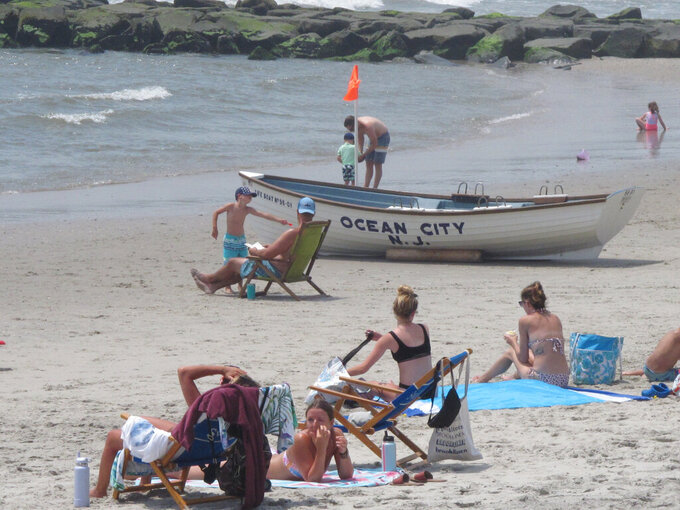 Wayne Parry, ASSOCIATED PRESS
This July 8, 2021, photo shows people on the beach in Ocean City, N.J. On Nov. 4, 2021, a coalition of environmental and faith-based groups began a campaign to drum up support for offshore wind projects in New Jersey, particularly in places like Ocean City, where opposition to such projects has been vocal. (AP Photo/Wayne Parry)

ATLANTIC CITY, N.J. (AP) — A coalition of environmental and faith-based groups in New Jersey began an effort to drum up support for offshore wind projects on Thursday, particularly in coastal towns where there's been vocal opposition to the projects.

Led by the New Jersey League of Conservation Voters, the New Jersey Wind Works campaign acknowledges it receives financial support from the offshore wind energy industry, but said it is an independent group and that the funding from offshore wind companies does not constitute a majority of the campaign's funding.

“We know that climate change is a major threat to the way of life at the Jersey Shore,” said Ed Potosnak, the league's executive director. “We're seeing more severe storms, and sunny day flooding is becoming more common. We want to advocate for responsible offshore wind energy development.”

Atlantic Shores is planning a second project off the New Jersey coast, but hasn't received approval.

Combined, the three approved projects aim to provide enough electricity to power over 1.6 million homes. New Jersey has set a goal of generating 100% of its energy from clean sources by 2050, and plans to solicit additional wind energy projects every two years until at least 2028.

Potosnak said the campaign may begin outreach efforts in Ocean City, where much of the city government and a vocal group of residents have opposed offshore wind projects. The city's mayor, Jay Gillian, recently said the developer Orsted should be required to pay the city an annual “impact fee,” since cables from the project are proposed to come ashore in Ocean City. He also wants the turbines moved far enough offshore that they are not visible from the beach.

New Jersey recently enacted a law removing most of the ability of local communities to block offshore wind projects or their onshore infrastructure.

Suzanne Hornick, a leader of Protect Our Coastline, which opposes the wind energy projects on environmental, safety and other grounds, said offshore wind foes have their own multi-state coalition to challenge such projects. She also criticized New Jersey Wind Works for accepting funding from companies building them.

“How can you give any credibility to a campaign that is accepting money from the offshore wind industry?” she asked.

The most commonly voiced objections from opponents include the unknown effect wind turbines might have on the ocean, fears of higher electric bills as costs are passed on to consumers, and a sense that the entire undertaking is being rushed through with little understanding of what the consequences might be.