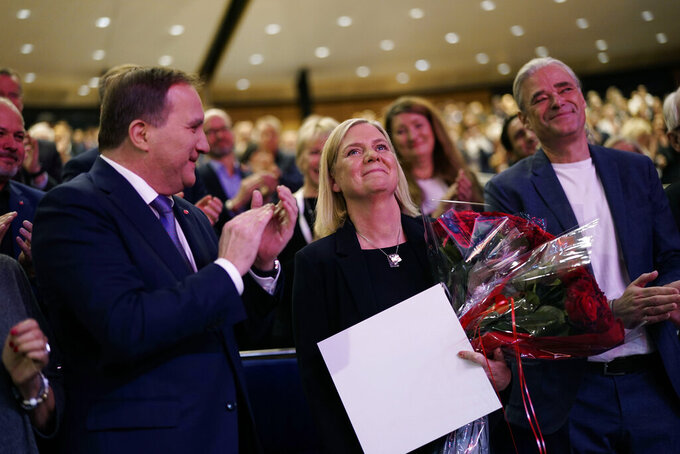 Bjorn Larsson Rosvall, ASSOCIATED PRESS
Sweden's Minister of Finance Magdalena Andersson is congratulated by her predecessor Prime Minister Stefan Lofven, after being elected to party chairman of the Social Democratic Party at the Social Dedmocratic Party congress in Gothenburg, Sweden, Thursday, Nov. 4, 2021. Andersson has been elected new chairman of the ruling Social Democratic Party and replaced Stefan Lofven who is also stepping down as the country’s prime minister. Thursday's appointment of the 54-year-old came ahead of next year’s general election. (Bjorn Larsson Rosvall/TT News Agency via AP)

COPENHAGEN, Denmark (AP) — The speaker of Sweden’s parliament tasked the leader of the Social Democratic Party on Thursday with trying to form a new government, which would make Finance Minister Magdalena Andersson the Scandinavian country’s first female prime minister, if she is successful.

Parliament speaker Andreas Norlen said Andersson must indicate by Tuesday whether she can find enough support in the lower house of parliament, the 349-seat Riksdag, to form a Cabinet.

Andersson, 54, was elected to lead the Social Democrats during their regular congress on Nov. 4, after Prime Minister Stefan Lofven announced in August that he was resigning the party post.

Lofven, 64, who stepped down as prime minister on Wednesday, is continuing to lead the Swedish government in a caretaking capacity until a new government is formed.

The present Social Democratic-Green governing coalition hopes to secure Andersson’s confirmation as prime minister with the backing of two smaller parties. Sweden has a general election set for Sept. 11, 2022.

The Social Democrats currently hold 100 of the Riksdag's 349 seats, and the Greens have 16 seats. One of the coalition's hoped-for allies, the Center Party, said Wednesday that its lawmakers would abstain from a vote on Andersson, paving the way for her appointment as prime minister.

The small Left Party has not yet said whether its lawmakers would take part in a confirmation vote.

Under the Swedish Constitution, prime ministers can govern as long as a parliamentary majority - a minimum 175 lawmakers - is not against them.

Earlier Thursday, Ulf Kristersson, head of the opposition Moderates, which is Sweden’s second-largest party, said a center-right government was not feasible because no mainstream parties want to cooperate with the right-wing populist Sweden Democrats, which is rooted in a neo-Nazi movement.