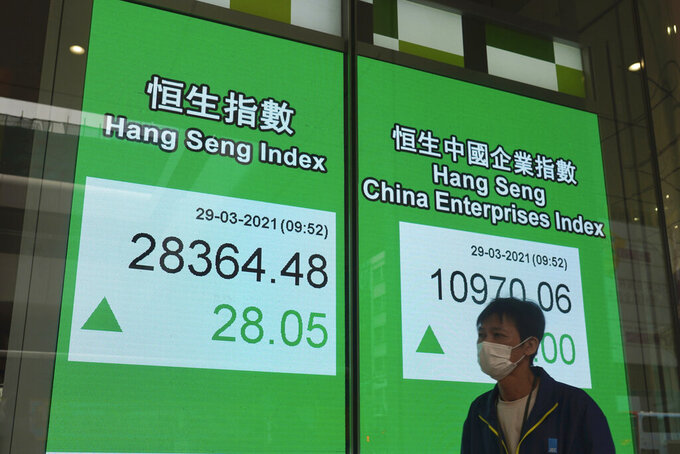 BEIJING (AP) — Asian stocks rose Monday after Wall Street hit a new high and investors were encouraged by government stimulus and the rollout of coronavirus vaccines.

Wall Street’s advance Friday was led by stocks that would benefit if vaccinations and government spending boost the U.S. economy as much as expected.

Vaccines and stimulus have “helped to create an aura of high optimism,” John Bilton of JP Morgan Asset Management said in a report. He said “above-trend global growth” should last into 2022 and regions such as Europe that are at “peak pessimism” due to vaccine delays should accelerate later this year.

Markets have been swinging between optimism that vaccines might allow business and travel to return to normal and anxiety over setbacks in distribution and concern about possible inflation after massive government stimulus.

Investors were jolted last week by news Egypt’s Suez Canal, one of the busiest trade routes, was blocked by a cargo ship that became wedged into the waterway.