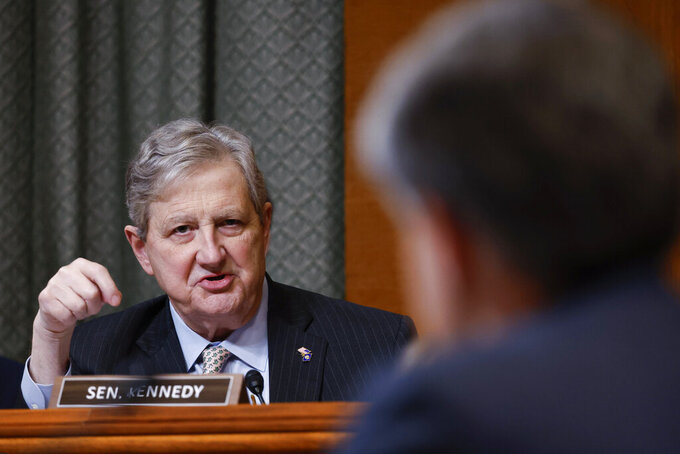 As Republicans fight for control of the U.S. Senate, Kennedy released an ad touting his voting record, which he said includes bills to cut taxes, "secure the border" and “stand up to China.”

“You have to watch what people do, not just what they say,” Kennedy, who is pursuing a second term, says in the 30-second video.

Though Kennedy is the likely favorite and has the endorsement of former President Donald Trump, 12 other candidates are hoping to unseat the incumbent in the closely watched race.

Among them is Mixon, a Louisiana native endorsed by fellow Democrat and Gov. John Bel Edwards. Mixon released his first television ad Tuesday — amounting to a six figure expenditure, according to his campaign. In it, Mixon notes his background as a fighter pilot who graduated from TOPGUN and says he spent 20 years “fighting extremism around the world.”

Mixon has repeatedly attacked Kennedy for his opposition to abortion and for being among the Republicans who refused to certify the 2020 election results in which Joe Biden defeated Trump to become president.

Notably, Mixon says in the ad that if he is elected, he would vote to codify the landmark 1973 Roe v. Wade decision that legalized abortion nationwide, and which was struck down by the U.S. Supreme Court this summer. In Louisiana a near-total abortion ban is in effect. The only exceptions are if there is substantial risk of death or impairment to the patient if they continue with the pregnancy and in the case of “medically futile” pregnancies — when the fetus has a fatal abnormality. There are no exceptions for rape or incest.

“Forcing rape victims to give birth and risking women’s lives are not the American values I fought to defend,” Mixon said.

Among other Democratic candidates in the race are activist Gary Chambers Jr. — who drew national attention earlier this year for an online video ad that shows him smoking marijuana while decrying racial disparities in drug arrests — and Syrita Steib, who works to help formerly incarcerated women reenter society.

But challengers face an uphill battle against Kennedy in a state where GOP candidates have dominated statewide elections. In addition, Kennedy has a growing war chest, last reporting $15.8 million on hand in campaign funds. Based on the most recent reports from the Federal Election Commission, Mixon has nearly $600,000 on hand.

The election could be decided Nov. 8, as the state has a unique jungle primary system — if a candidate wins a majortity of votes case, more than 50%, then they win the election outright. If no candidate meets that threshold, the top two, regardless of their partisan affiliations, advance to a December runoff.