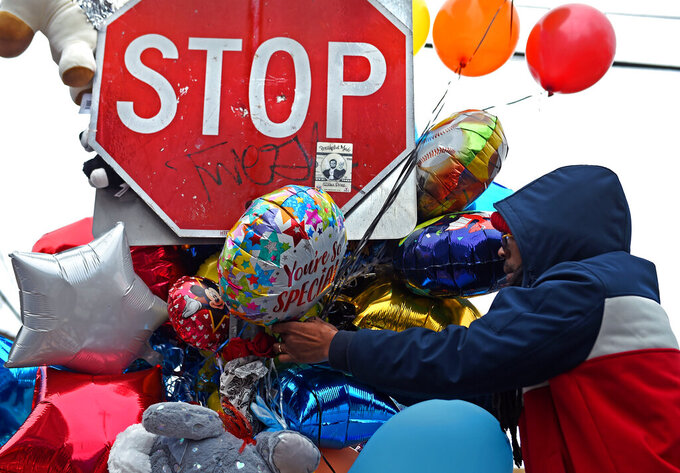 Brad Horrigan, ASSOCIATED PRESS
A man attaches more balloons to a memorial for Randell Jones on Monday, April 12, 2021 in Hartford. Police said Randell Jones, 3, was riding in a car with his mother, other relatives and a man when another vehicle pulled along side them and someone opened fire on Saturday. Randell died in the shooting, which appeared to have targeted the man in the car, police said. (Brad Horrigan /Hartford Courant via AP)

Gathered outside the state Capitol, members of the legislature's Black and Puerto Rican Caucus said during a news conference that the state has not done nearly enough over the past several decades to try to curb violence, especially among youth.

They said a lack of aid has contributed to cycles of violence in Hartford, Bridgeport, New Haven and other cities with large Black and Hispanic populations and some of the poorest neighborhoods in the country.

“What we are seeing in our cities is a slow ... mass killing and that this state is doing almost nothing about it,” said state Sen. Gary Winfield, a Democrat from New Haven. “If we want to fix the things that we see, we have to first admit that policy has built us to this place. And once we admit that, we have to say, ‘Well then we have a responsibility through policy to fix it.’”

State Sen. Marilyn Moore, a Bridgeport Democrat, said any increases in state or federal aid should go to community groups that already are working to address violence in the cities, not government agencies.

Citing a spike in homicides in cities across the country, President Joe Biden has asked Congress for $5 billion over eight years to support community anti-violence programs that provide job training and other services. His administration noted the racial disparities in America's gun violence, saying Black men make up 6% of the population but account for over 50% of gun homicide victims.

On Saturday afternoon, 3-year-old Randell Jones was killed while riding in a car with his mother and other people when someone in another vehicle opened fire at them. Police said a man in Randell's car was the target. About two hours later, 16-year-old Jamari Preston was shot to death less than a mile away.

Hartford police said the shootings were related, but provided no details. No arrests have been announced.

Lawmakers said more money needs to be allocated to expand existing anti-violence groups working in cities, including Project Longevity, Hartford Community that Cares, Compass Youth Collaborative and Connecticut Violence Intervention Program. And more needs to be done to help young people who have been traumatized by violence in their communities, they said.

Project Longevity, which has programs in Bridgeport, Hartford and New Haven, joins together community members, social service providers and law enforcement in efforts to reduce violence.

Harold Dimbo, a former police officer who now leads Project Longevity in Bridgeport, said the program doesn't have enough staff to adequately respond to violence in the community. He also called for more aid during the news conference.

“I'm tired of putting a Band-Aid on the wound,” he said. "I was raised and born in Bridgeport and I see the same thing over and over again. They get arrested. They go to jail. They come home. They have no jobs. It's hard to get jobs. They go back into the system.

“To bring down the gun violence, we have to be one,” Dimbo said. “We all have to come together and work together. We already know the community is the only one that's going to change this gun violence. Let's take the Band-Aid off and fix the problem.”

Gov. Ned Lamont, a Democrat, said Monday in response to the Hartford killings that his administration is working with community groups, religious leaders, families and others to reduce violence.