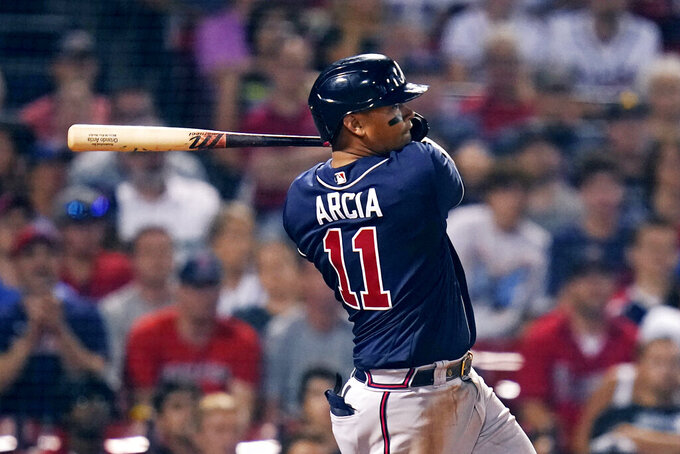 BOSTON (AP) — The Atlanta Braves called up prized prospect Vaughn Grissom to play second base Wednesday and brought back former Padres closer Kirby Yates from a rehab assignment — nearly two years after he last pitched in the big leagues.

The 21-year-old Grissom was in the lineup, batting ninth for the second of two games at Fenway Park. He takes over for Orlando Arcia, who was placed on the 10-day injured list with a strained left hamstring he sustained running the bases in Atlanta’s 10-inning victory Tuesday night.

Grissom got the call after batting a combined .324 with 14 homers, 67 RBIs and 27 stolen bases for High-A Rome and Double-A Mississippi.

He is the latest player to get a crack at second base while the Braves await the return of Ozzie Albies, who is recovering from a broken foot.

Yates, who underwent Tommy John surgery during the pandemic-shortened 2020 campaign, missed all of last season before signing a two-year deal with the Braves in hopes of providing bullpen help down the stretch.

It may work out just as the team had planned. Yates made eight rehab appearances with several minor league teams. He pitched 8 1/3 innings, surrendering four hits, two walks and one earned run while striking out 10.

The Braves are hoping the 35-year-old Yates can regain the form that made him one of the game's top closers in 2019. He had 41 saves and a 1.19 ERA for San Diego while making the All-Star Game for the first time.

Yates provides another right-handed option in a bullpen that added former Angels closer Raisel Iglesias at the trade deadline to serve in a setup role to closer Kenley Jansen.

Grissom is the second 21-year-old prospect to join the Braves from Double-A this season, following center fielder Michael Harris II.

Harris has been a big hit since his promotion, going into Wednesday's game hitting .288 with 10 homers, 34 RBIs and 12 stolen bases while providing a defensive boost in center field.

Harris moved up to the eighth spot in the order, meaning the two youngsters were batting back-to-back against the Red Sox.

Grissom played second, short and third in the minors. He persuaded the Braves he was ready for a shot in the big leagues by hitting .363 in 22 games at Double-A.

To make room for Grissom on the 40-man roster, the Braves released first baseman Mike Ford, who had been on the IL. Atlanta also optioned right-hander Huascar Ynoa back to Triple-A after a brief stint in the big leagues and shifted outfielder Adam Duvall to the 60-day IL.