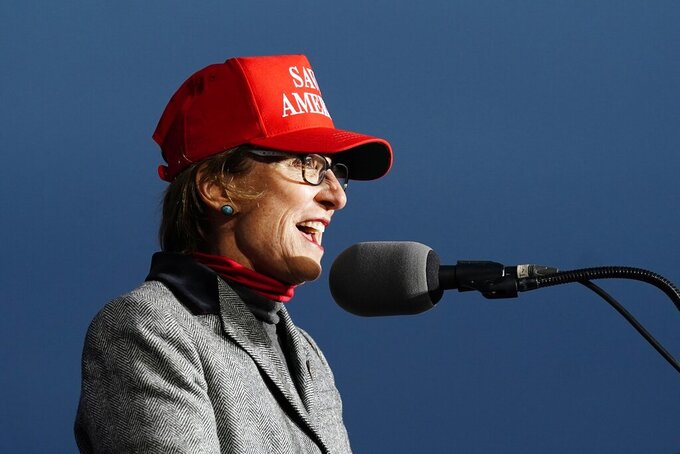 PHOENIX (AP) — The attorney for the Arizona Senate's ethics committee submitted a report Friday on his investigation of a Republican lawmaker's online comments that appeared to blame the federal government for a supermarket massacre in Buffalo, New York.

But the report from attorney Chris Kleminich reached no conclusions on whether Sen. Wendy Rogers' comment broke the Senate's rules and said the committee's role has been completed.

Instead, it will be up to the full Senate to decide whether the Flagstaff lawmaker's comments merit discipline.

The Ethics Committee was directed by the full Senate in May to look into the online post Rogers made the night a young white man went into a market in a predominately Black neighborhood and fatally shot 10 people. Authorities say the gunman had posted a racist screed before the May 14 attack.

As news of the mass shooting was just becoming known, Rogers tweeted: “Fed boy summer has started in Buffalo.”

Many in both parties took that tweet to mean that Rogers was blaming the attack on the federal government, especially in light of Rogers’ history of embracing conspiracy theories.

Rogers later wrote that her comments were misconstrued by the media. She said instead they expressed her worry that inaction on crime and border security will lead to riots and looting.

But Kleminich noted that it was not only the media that interpreted her comments to mean the federal government was behind Buffalo attack. He noted that the most comments in response to her post interpreted it the same way.

Rogers declined to be interviewed by Kleminich. Instead, she answered questions through her attorney, Tim La Sota.

La Sota criticized the investigation, saying it would lead to probes of other activity protected by free speech rights.

“Where this is leading is obvious and is demonstrated by this case,” La Sota wrote. “Republicans will be required to defend themselves amid these ethics ‘investigations,’ and Democrats will receive a pass.”

Kleminich said any action will now be up to the full Senate, which asked for the investigation.

The Senate, which is controlled by Republicans and could adjourn for the year any day, could decide on discipline ranging from a formal censure to expulsion. It could also drop the matter with no action.