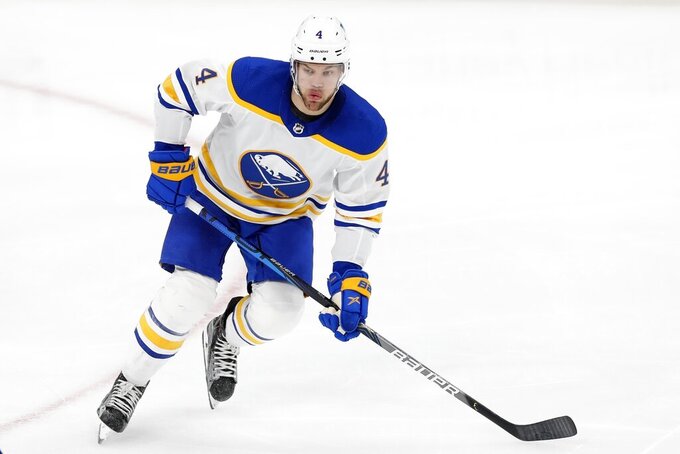 Michael Dwyer, ASSOCIATED PRESS
FILE - In this Saturday, March 27, 2021 file photo, Buffalo Sabres' Taylor Hall plays against the Boston Bruins during the second period of an NHL hockey game, in Boston. The Buffalo Sabres could trade 2018 MVP Hall, who signed for just this season and is a pending free agent. (AP Photo/Michael Dwyer, File)

BUFFALO, N.Y. (AP) — Forward Taylor Hall hopes a fresh start with the Boston Bruins can boost his confidence after three dreadful months with the Buffalo Sabres.

The opportunity to join a team making a late-season playoff push should help after the NHL’s 2018 MVP was acquired by the Bruins on Monday.

“These last few days, you do some soul-searching, and you look back on what you can do better, and look forward to the future,” Hall said during a video conference call from Buffalo before making the near nine-hour drive east to Boston. And he's expected to be in the Bruins lineup for their home game against the Sabres on Tuesday.

“There’s been a lot of distractions this year, a lot of things that really haven’t gone well. And confidence-wise, the team here in Buffalo just never got off to the right foot,” he added. “I think the best way to get confidence is to be part of a winning team and make yourself part of the bigger solution.”

Hall didn’t pan out in Buffalo after signing a one-year $8 million contract in October. He managed just two goals and 19 points in 37 games, while closing his tenure with a 16-game goal drought.

He leaves the last-place Sabres to join the banged-up Bruins, who are in a tightly contested race to secure the East Division’s fourth and final playoff spot.

Boston, which sits fourth in the standings and four points ahead of the Rangers and Philadelphia, also added checking line forward Curtis Lazar in the trade. Buffalo acquired fourth-year forward Anders Bjork and a second-round pick, while also agreeing to retain half of the remainder of Hall’s salary.

“Obviously, Taylor’s extremely motivated,” Bruins GM Don Sweeney said. “He’s been a highly successful player at the highest of levels. If he has a little bit of success, I think he could get a snowball affect associated with that.”

The Sabres, by comparison, are in sell-off mode with the team all but assured of matching the NHL playoff drought record of 10 seasons. Buffalo traded defenseman Brandon Montour to Florida on Saturday, and previously traded veteran center Eric Staal to Montreal.

The Sabres began sitting out Hall for precautionary reasons since Tuesday in anticipation of a trade.

His departure marks the latest in a string of high-priced busts in Buffalo, where the team’s payroll is already saddled with under-performing players in forwards Jeff Skinner and Kyle Okposo. Add in Hall’s two goals, and the three have combined for nine goals despite representing $24 million in payroll.

First-year GM Kevyn Adams went from believing Buffalo was on the verge of contending on upon signing Hall, to being handcuffed in what assets he could gain in being required to honor the player’s choice of landing spots because of his no-trade clause.

“I was certainly talking to as many teams as possible, but the number gets limited quickly on who can make a deal like that work,” Adams said. “So when you get down to the wire, you’re negotiating and doing your best for the organization where we were with one team.”

Buffalo acquired the 24-year-old Bjork, who had two goals and three assists in 30 games this season, a year after generating a career-best nine goals and 19 points in 58 games. Overall, the 2014 fifth-round draft pick out of Notre Dame has 16 goals and 39 points in 138 games with Boston.

Little has gone right for Buffalo. Coach Ralph Krueger was fired on March 17, and the Sabres’ season was undone by mounting injuries and a pause for two weeks following a COVID-19 outbreak in early February.

Hall is on to his fourth team in two years. He was traded by New Jersey to Arizona last season, and then became a free agent after negotiations broke down with the Coyotes because of internal turmoil, which led Bill Armstrong taking over as general manager.

“I still believe in myself as a player. I still feel like I can add things to a team. ... That’s what makes me really excited,” Hall said. “I really just want to be part of a winning team. However I can do that, I’m all-in.”