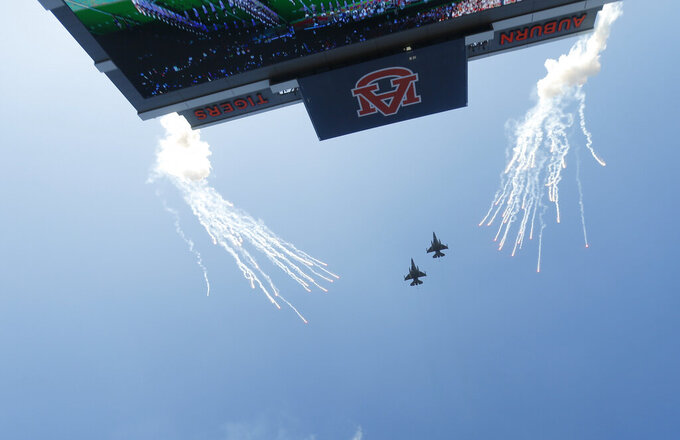 Gerald Herbert, ASSOCIATED PRESS
FILE - A F-16 flyover is seen before an NCAA college football game, Saturday with Alabama and Auburn, Nov. 28, 2015, in Auburn, Ala. There’s something special about standing in a packed Auburn football stadium with 87,000 other passionate fans when military aircraft fly over as the “Star Spangled Banner” is ending. Whether it’s an F-16 jet or the low, slow rumble of a Chinook helicopter, fans love it, and so do the pilots. (AP Photo/Gerald Herbert, File)

AUBURN, Ala. (AP) — There’s something special about standing in a packed Auburn football stadium with 87,000 other passionate fans when military aircraft fly over as the “Star Spangled Banner” is ending.

Whether it’s an F-16 jet or the low, slow rumble of a Chinook helicopter, fans love it, and so do the pilots.

“As we crested into the stadium, the ground crew called on their radio to say we were perfect on time, and in the background we heard the stadium just going crazy. I got chill bumps,” said 37-year-old Chief Warrant Officer 4 Joshua Hattery.

Hattery flew the AH-64 Apache and was the flight lead of the Fort Rucker crew that flew over during the Georgia game.

The crew was made up of several different units within the U.S. Army Aviation Center of Excellence and consisted of three aircraft.

“I rode in what’s called the jump seat of the aircraft, and I essentially did the coordination for the mission, the planning, kept track of all information and made sure we were on time,” Sherba said.

There were also three personnel on the ground that communicated with the aircraft and the Auburn band director to make sure the timing was perfect.

“We like to honor the pilots on the field, especially our Auburn alumni. Usually that’s one of the loudest applause that we’ll have during a game,” said Auburn assistant athletic director Dan Heck.

“Walking out on the field, I felt like a rock star with the way the fans responded to us,” Hattery said.

Hattery’s daughter Kylie is a sophomore at Auburn and he said it was extra special to fly over the stadium while she was in the student section and to have her and the rest of his family join him on the field.

“To say it was emotional would be an understatement,” Hattery said. “I’ve always wanted to fly over for a sporting event and this opportunity came up 120 days before my retirement.”

While the flyover seems like a brief moment before the game, there are a lot of different pieces that go into making a flyover happen.

Planning starts with Auburn Athletics and assistant athletics director Dan Heck. In January, Heck will create a list of the big games the university wants to have a flyover for.

Then he meets with the Auburn Naval ROTC on campus, which is responsible for filling out paperwork, coordinating logistics and posting the request to a government website operated by the Pentagon where units can apply for the flyover.

After finishing all the paperwork by August, Auburn will have an idea of which game each unit will fly for.

Two weeks prior to a flyover, the athletics department creates a timesheet for the logistics including kickoff time, tickets for the pilots, transportation and more.

“We provide the support the flight crews need and make sure everyone is communicating,” said Todd Storey, airport assistant director.

“It’s a long, regulated process. You can’t just pick up a phone and say I need you to fly over in an hour.”

Conducting a flyover for a football game is approved as a training mission for military units.

According to Lt. Col. Andy Thaggard, the USAACE director of public affairs at Fort Rucker, the cost is covered by the military with no additional cost to the government or taxpayers.

According to Hattery and Sherba, game day flyover missions mirror combat missions. Everything comes down to the second.

“Time on target is critical,” Hattery said. “Whatever the target is, whether it’s inserting troops on the ground or engaging the enemy, we have to be deliberate in planning and make sure we’re on time every time. This mission was no different.”

All the different personnel have to be on the same page and timing has to be perfect. To make sure this happens, units have teleconferences with FFA and the university and conduct mission rehearsals the Friday before the game.

“Things change and we’ll get updates,” Sherba said. “We’re continually tweaking and refining the updates to the mission to make sure that it’s as accurate and precise as possible.”

And it sharpens everyone involved. “This is really good intense training because you have got to be spot on,” Hattery said. “You have to rehearse, coordinate and plan not only on timing but for executing the right altitude and airspeed,” Hattery added.

‘YOU HAVE TO LOVE IT’

Units have come from all over including Laughlin Air Force Base in Del Rio, Texas, Naval Air Station Oceana in Virginia Beach, Virginia, as well as local units like Fort Rucker.

“I actually flew an airplane before I drove a car,” Sherba said. “Flying is something I always tell folks you have to love it to do it. It feels like it’s a part of me.”

Sherba was in the National Guard for two years while in college and has been in active duty since 2013. He graduated from flight school in 2015, became a lieutenant in the aviation branch and eventually became a subject matter expert of the CH-47 Chinook.

He was a platoon leader for three years and supported various different training exercises all across the country.

Sherba was deployed to Europe for Operation Atlantic Resolve, and when we returned to Fort Rucker, he took the captain’s career course and was selected to command Alpha Company 1st Battalion, 223d Aviation Regiment.

Hattery didn’t begin his Army career in aviation. “I grew up infatuated with the idea of flying,” he said. “I joined the Army as an infantryman and my ground unit always looked up in awe at the aviators that provided us with support. They were like our guardian angels.”

Hattery first enlisted in 2002 and was deployed to Iraq right after the invasion of Iraq.

“I saw these helicopters flying around and I said, ‘Why am I walking around if I can do that?’ When I came back I immediately applied for flight school,” he said.

For about 10 years, Hattery flew Kiowa Warriors, an aircraft scout helicopter. He was deployed twice to Afghanistan, once to Kandahar and once to Jalalabad, and he was also deployed to Korea.

When he returned to Fort Rucker, he started the transition to the Apache helicopter, and for about four years he has been an instructor teaching others to fly the Apache.

He is currently serving as the academics branch chief.

“Flying is near and dear to my heart,” Hattery said. “Besides serving the bigger purpose of the ground force, flying is fun and challenging. It’s something you’ll never completely master. You have to keep learning.”

Heck said that Auburn likes flyovers to be a surprise for the fans.

Auburn likes to pick the high profile games and rivalry games to have a flyover, but Heck said he wished they could have one every game.