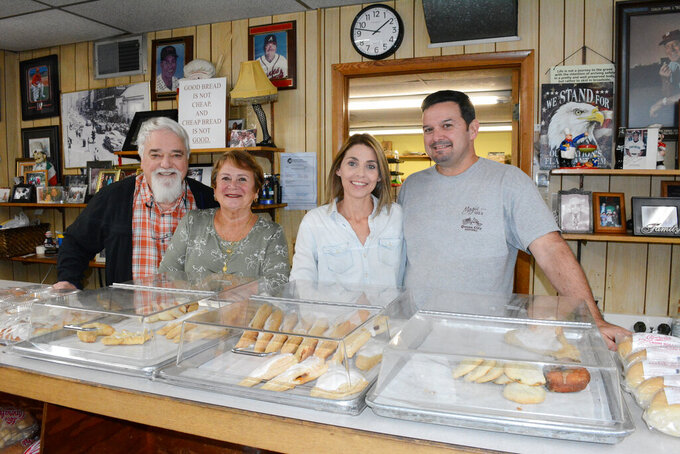 Steve Bittner, ASSOCIATED PRESS
Dave and Missy Caporale, from right, who run Caporale’s Italian Bakery day-to-day after taking over from Dave’s parents, Cindy and Gus, about 10 years ago, pose for a photo Nov. 1, 2021, in Cumberland, Md. The bakery, founded in 1906 by Italian immigrant Augusto Caporale, celebrated its 115th anniversary in October. (Steven Bittner/Cumberland Times-News via AP)

The bakery, founded in 1906 by Italian immigrant Augusto Caporale, celebrated its 115th anniversary in October. While the business has changed locations multiple times, some members of the Caporale family said during a recent interview, the business is much the same as it was all those years ago. They attribute the bakery’s long-term success to the family’s dedication and passion, along with a supportive base of generational customers.

The deceptively big bakery on Mechanic Street has been home for 40 years, Dave Caporale said, and is full of family photos and mementos collected over 10 decades. They were open for a time in LaVale and the bakery’s original location was in South Cumberland on Third Street. For about 10 years, Dave Caporale and his wife Missy have run the bakery day-to-day after assuming charge from Augusto “Gus” and Cindy Caporale, Dave’s parents.

The bread they sell, Dave Caporale said, hasn’t changed much over the years, except for being a bit softer due to customer preference. They also sell more sliced than unsliced loaves, he noted.

“I don’t think the product has changed,” Dave Caporale said. “The traditional Italian loaf has a hard crust, and people like their bread a little bit softer now, so we’ve tried to accommodate that. There’s not a lot that has changed.”

As a teenager, Dave — who is a former Cumberland City Council member and currently serves as an Allegany County commissioner — worked in the bakery. Of their four children, Cindy Caporale said, he “had more of a sentimental attachment” to the business.

“(Dave’s) taken over his dad’s part, and Missy has been a lifesaver to me,” Cindy Caporale said of her daughter-in-law assuming bookkeeping and clerical duties. “You know, you don’t realize what you do until you try and tell somebody else about it and how to do it.”

While Gus has officially retired, he bakes the specialty baked goods sold on Sundays at home.

They’ve expanded the range of goods for sale on Sundays in recent years, Dave Caporale said, and Cindy Caporale noted that the specialty breads and cakes sold for Thanksgiving and Christmas are also relatively new.

“We never had that kind of stuff in the beginning,” she said. “We’ve kind of added that on over the years.”

The storefront represents a relatively small part of the bakery’s business. In fact, Cindy Caporale noted, Sundays are the busiest day for the storefront, which is closed to customers on Tuesdays and Saturdays. Much of what’s baked there is sold wholesale, Dave Caporale said, to grocery stores and restaurants around the region.

After so long in business, the bakery and the Caporale family have deep ties to the community. They’ve developed a loyal base of customers over the years who help make the business what it is, as well as their longtime employees.

“You get to know so many people through the years who you do business with that you are Caporale’s bakery,” Cindy Caporale said. “You are the bakery, when you go out somewhere and people recognize you. It’s nothing for someone to come in here and see Dave or Gus sitting in here, and come back and start talking. It’s a congregating place.”

Pride and tradition go a long way toward making the bakery so special to him, Dave Caporale said.

“It’s like (Cindy) said, you spend your whole life here, you’re in one place for so long, you become that place,” Dave Caporale said. “I brought one guy home one time, and he complained about his day. I said, ‘Well, think how many families out there might be sitting down to have dinner and eating the rolls we made today, or the bread that we made today.’ So I think feel like you make a difference, too.”