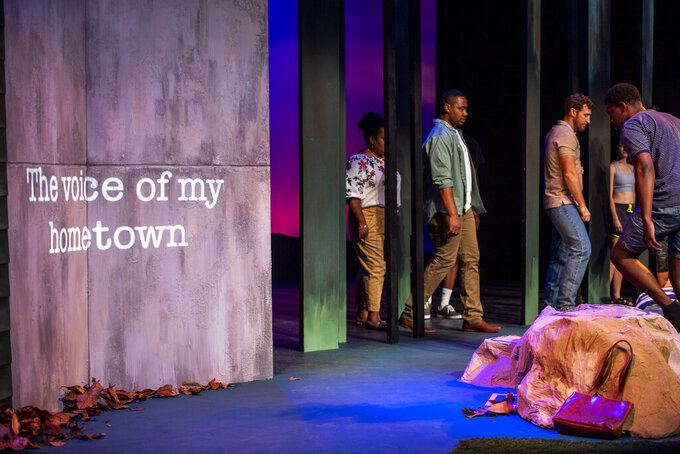 LYNCHBURG, Va. (AP) — As American citizens celebrated freedom and liberty in their nation on Independence Day, 1961, a government founded on notions of the inalienable human rights to life, liberty and the pursuit of happiness took action at a local level to deny those rights to their fellow citizens whose skin was not white.

This little-taught chapter of local history is being brought to life in an original play, “Buried Deep,” produced through Endstation Theatre Company, affiliated with Randolph College.

On that sweltering July day in Lynchburg, as many residents sought the relief offered by public pools, the city closed those pools down because some Black residents went to swim in the whites-only pools at Miller and Riverside parks. They were exercising their civil rights and making intentional strides toward integration and equality when many people were content to drag their feet despite a federal court’s recent ruling that mandated desegregation nationwide.

The Black community was not entirely without allies. Camp Kum-Ba-Yah, for instance, opened its pool fully integrated following the city’s closure of the public pools at the parks, and maintained its integrated status even though some white patrons left in protest.

Today, if one visits Riverside Park, an indentation in the ground where a pool once stood remains as a permanent scar of racial tensions in the not-so-distant past.

“Buried Deep” is part of Endstation’s New Works initiative, a program which supports playwrights who create a script based on some aspect of Lynchburg-area history.

Chicago-based playwright Josh Brewer, who had worked previously with Endstation, began developing this work in 2019 following something of a chance encounter during an excursion at Riverside Park.

There, Brewer noticed the indentation in the ground which, upon investigation, he discovered to be a filled-in public swimming pool, accompanied by a plaque summarizing its history. He knew this was a story that had to be told.

The idea to write a play about the city pools incident already was on a shortlist of brainstorms at Endstation Theatre Company, according to the company’s executive director, David Lee.

Since its founding in 2006, the local theater company has a history of telling community stories, particularly ones that address social issues on a local level. “Buried Deep” fit perfectly into this tradition.

The production opened after more than 20 drafts and revisions of the script and delays due to the COVID-19 pandemic.

Segregation was the law of the land through the 1960s, and Lynchburg was no exception. Even after federal court-mandated integration nationwide, many places strove to maintain racial divides. Miller Park, Riverside Park and Jefferson Park — which was designated for Black people only during the era of legal segregation — would have their pools filled in with concrete by 1968 after several years of disuse following the July 1961 shutdowns.

“I’m passionate about anything that tells stories that raise issues that face people of color, or people that are marginalized and disenfranchised. When I read this piece, I said, ‘This is history I don’t know of. This is history that was erased, and I need to tell this story.’ And that’s why I’m here,” Darling said.

Protests against racial inequality and segregation were a major part of the civil rights movement, and one form of protest included “sit-ins,” where Black people would enter restaurants, cafeteria areas, businesses and other spaces designated for “whites only.” In Lynchburg, groups of Black people began organizing “swim-ins” at local public pools.

“We did that because we knew what was going to happen,” James “Jim” White said in a previous interview with The News & Advance.

White, who was 16 when the public pools were filled in, participated in swim-ins at the Riverside Park pool.

“If we jumped in the pool, they were going to make everybody get out of the pool because they had to take all the water out and replace it, because Black folks had been in it. They couldn’t allow Black folks to jump in the pool and ‘contaminate’ the water. So that meant they had to close the pool down for that day, and nobody could swim. And that was our objective in the first place,” White said.

When Black teens jumped into whites-only pools, White said, the white swimmers would jump out, many of them calling out racial slurs.

Hylan “Hank” Hubbard, of Lynchburg, now in his 70s, spent the summer of 1961 in Washington, D.C., with his uncle when he heard his home city of Lynchburg finally cracked down on the swim-ins: local officials would rather no one swim than allow people with different skin colors to mingle together.

The reason the city gave for its decision, Hubbard said, was “violence” would erupt if Black and white individuals came together.

“It’s that whole notion of ‘separate but equal’ which they used to promote,” Hubbard said in a previous interview with The News & Advance. “We got the ‘separate’ part right. We didn’t get the ‘equal’ part right.”

After completing two virtual readings of “Buried Deep,” the cast came together for a live, in-person reading and talk-back session with a small crowd at an event hosted by the Academy Center of the Arts and Endstation Theatre Company on June 14.

The play jumps between present day and the past, primarily the 1960s, and actors play multiple roles.

Woven throughout the script are news articles and court rulings quoted verbatim, which help convey the prevailing sentiments of society at the time but also highlight those in the community who recognized something wrong and stood up for what was right. Characters are based on the real-life Lynchburg citizens who were involved in the pools incident, on both sides of the issue, with a few fictional characters created for scenes of the play based in present-day.

Some artistic license was taken in imagining interactions and dialogue between characters, filling out the story and making it more personal and accessible, but all was extrapolated from historic record and remains true to history.

“Because this is lived history for so many members of our community, there is a sacred responsibility for us to tell the story in as accurate a way as possible, despite the fact that it’s a combination of real and imagined elements,” Lee said.

Among the audience at the exclusive reading were several individuals who lived through the events detailed in the play. For them, it was a time to talk openly about the incident that many would prefer to suppress or ignore, how it affected them and their communities, and engage in honest dialogue about painful but meaningful issues.

Doris Lee Lewis Waller, 88, recalled the reek of methane gas emanating from Jefferson Park after the pool shut down as the city had filled it in not just with dirt, but with garbage.

The day after the swim-in, Waller added, working Black people who participated were fired from their jobs in retaliation. She said she remembered one swim-in where only three white boys remained in one of the pools as other white swimmers jumped out of the water — and she was grateful for those boys’ example.

Keelan Burns, an actor in “Buried Deep” and a rising senior at Liberty University, is a Lynchburg native — but he said he had only heard the pools incident mentioned maybe once, and never in depth or given the “why.” Like most of the rest of the cast, he learned the true history through the play.

“There was never really much discussion about that, and I never really thought to discuss it … And especially why they closed the pools. The why is extremely important,” Burns said.

Chicago-based actor Blake Currie joined Endstation’s cast for the production. Being friends with the playwright, Currie said he got to read the earliest drafts of Brewer’s script as it developed. Being a part of telling this history, he said, has been a humbling experience.

“This story is what brought me here to Lynchburg, and honestly, I come from a place of reverence,” he said. “It’s not necessarily my history, but I feel so privileged and honored to tell that history on behalf of this town.”

The play also addresses the consequences and aftershocks of the events described, including why the drowning rate among Black people is statistically higher than among white populations.

Segregation and systemic disenfranchisement led to Black people having limited or no access to opportunities to learn to swim. As a result, statistics show death by drowning is higher among Black populations than white. Indeed, just weeks after the Lynchburg pools shut down, a young man drowned in the river. This event is solemnly recounted in the play, and some city residents still remember the tragedy vividly and how it rocked the Black community in particular.

Waller said she herself never learned to swim.

Lynchburg resident Earl Spinner, 72, likewise remembers the days of segregation and the pools incident. He observed some people call Black history “divisive” and would call this play “divisive” because it addresses a topic that, like the name of the play suggests, many would prefer to bury.

Darling acknowledged this trend of labeling such discourse and teaching of history as “divisive” is another reason why telling this history is so important — now more than ever.

“Factual events are factual events,” Darling said. “If we bring a light to them, there are lessons to be learned. We talk about repeating history, but if you don’t know history, then things can be repeated.”

Recent years have proven starkly that racism remains ingrained in society and much work is yet to be done. Notable incidents include the murder of a Black man, George Floyd, by a white police officer later charged and convicted of murder; and the racially motivated slaying of Ahmaud Arbery, who was out for a jog when three white men pursued and fatally shot him. Just weeks ago, a white man was charged with a federal hate crime after committing what authorities said was a racially motivated mass shooting at a store in New York, which resulted in multiple deaths. Each event sparked racial justice rallies nationwide.

This play is not made to vilify Lynchburg, Lee said, but “it is about reckoning with our history in an honest way.” Facilitating discourse in the community and being aware of its history, of its strengths and weaknesses, can help forge a better future for everyone.

“We are hoping that our creative and artistic approach will create a tapestry of real and imagined elements that ultimately paint a very clear picture of what happened, and why it’s important,” Lee said.

Each performance will be followed by a community talk-back session where attendees can actively engage with what they learn: ask questions, have conversations and hear multiple perspectives.

“You cannot forget where you came from. But just keep on walking,” Waller said.