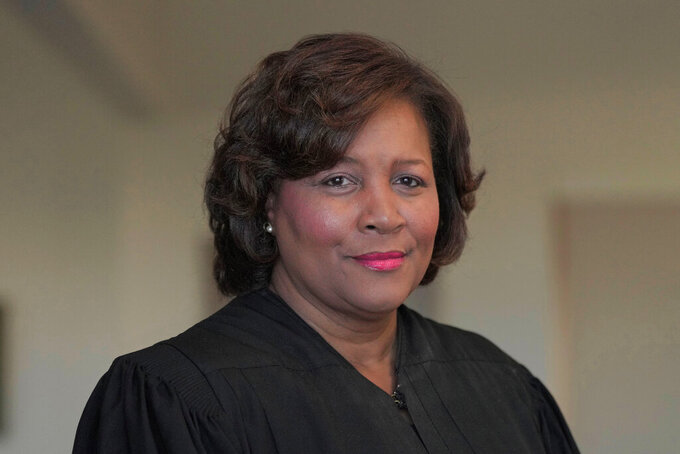 Meg Kinnard, ASSOCIATED PRESS
FILE - U.S. District Judge J. Michelle Childs stands in the federal courthouse where she hears cases on Feb. 18, 2022, in Columbia, S.C. On Thursday, May 26, the Senate Judiciary Committee voted 17-5 to Childs' nomination to the U.S. Court of Appeals for the District of Columbia Circuit. (AP Photo/Meg Kinnard, File)

COLUMBIA, S.C. (AP) — South Carolina jurist Michelle Childs — recently under consideration for a slot on the U.S. Supreme Court — is one step closer to confirmation for the federal court typically seen as a proving ground for the nation's highest bench.

On Thursday, the Senate Judiciary Committee voted 17-5 to approve Childs' nomination to the U.S. Court of Appeals for the District of Columbia Circuit. It now goes to the full Senate for a vote.

Childs, 56, has been a federal judge on South Carolina’s District Court for more than a decade. Earlier this year, she was on a shortlist of candidates being considered by President Joe Biden for an upcoming vacancy on the U.S. Supreme Court, given the pending retirement of Justice Stephen Breyer.

Childs had a litany of high-profile advocates, including U.S. House Majority Whip Jim Clyburn, on whose advice Biden pledged during the 2020 campaign to nominate a Black woman to the high court.

Childs’ supporters also included Republican U.S. Sen. Lindsey Graham, who said then he was certain Childs “would have been a reliable vote for the liberal bloc of the Court” but applauded her “open mind and balance that all Americans are looking for.”

Graham, who went on to oppose eventual nominee Ketanji Brown Jackson in a party-line Judiciary Committee vote, added that he felt Childs “would have received a strong bipartisan vote in the Senate.” Three GOP senators ultimately came out in favor of Jackson’s nomination, assuring her eventual confirmation as the high court’s first Black female justice, given unified Democratic support.

During Childs' appellate confirmation hearing last month, Graham again noted his likely disagreement with some positions from a nominee put forth by a Democratic president but called the position “consequential” and said he hoped people "can rally around the accomplished woman who has worn the robe well and has potential to serve at the highest level of the judiciary.”

At that same hearing, Clyburn pointed to Childs' “ordinary upbringing that has helped shape her life’s work and made her an example for so many young people in similar circumstances." It was reminiscent of his promotion of Childs for the Supreme Court, when he pointed to her legal training at the University of South Carolina School of Law — rather than an Ivy League institution — as a characteristic that would help Americans identify with the high court, currently populated almost exclusively with Harvard and Yale graduates.

Last year, Biden nominated Childs for the D.C. Circuit slot, but her hearing was postponed while she was also under consideration for the Supreme Court. Previously serving as a state trial court judge, worker's compensation commissioner and deputy director of South Carolina's labor department, Childs also practiced employment law at Nexsen Pruet, where she became the firm’s first Black female partner.