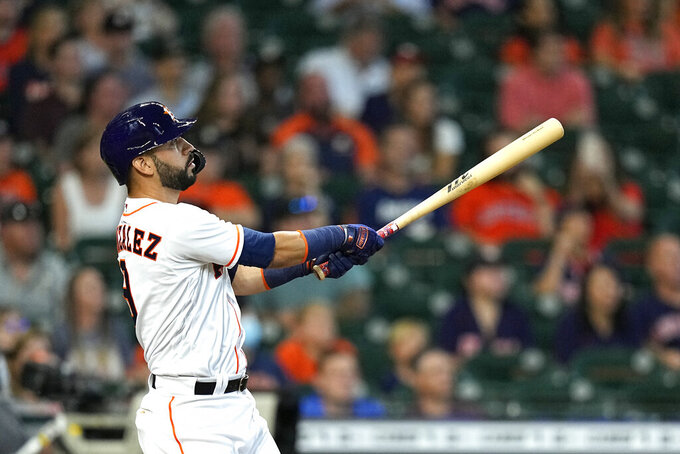 HOUSTON (AP) — In the wild-card chase with precious few games remaining, the Seattle Mariners don't have time to sulk after tough losses.

It was imperative they put the previous night's 10-inning defeat by the Houston Astros behind them to avoid a sweep in the series finale Wednesday.

A ninth-inning burst allowed them to do just that, as José Marmolejos hit a tiebreaking, two-run single with two outs in the inning and J.P. Crawford padded the lead with two-run homer to lead the Mariners to an 8-5 victory.

“You never would have known that we were in a tough game last night and weren't able to get it done ... the will to win that this team has is so unique," manager Scott Servais said.

Houston won the series opener Monday 11-2 and rallied Tuesday night for a 5-4 victory in 10 innings.

With the score 4-all, Luis Torrens singled with one out in the Seattle ninth and was replaced by pinch-runner Dylan Moore. Jarred Kelenic walked and both runners advanced on a wild pitch by closer Ryan Pressly (5-2).

“It’s just harder when you go to the same (guys) in the bullpen on consecutive days," manager Dusty Baker said. “The guys weren’t sharp today that are normally sharp."

Marmolejos grounded a single to center to put the Mariners ahead. Blake Taylor relieved and Crawford connected for a drive to right field.

After what happened Tuesday night the Mariners were happy to tack on more runs in the ninth after taking the lead.

“As soon as the ball went out we all took a deep breath," Marmolejos said. “You could see that relief."

The Mariners trailed most of the game before tying it at 4 on a two-run double by Kelenic with two outs in the seventh.

Wednesday's victory moved Seattle, which hasn't reached the postseason since 2001, to 2 1/2 games out of the second AL wild-card spot.

“They’re a really good ball club and to piece it together as a team and come out on top is what we’re going to need the rest of this month to get us to a playoff spot," Kelenic said. “To prove to ourselves that we can do that is only going to help us down the road."

Diego Castillo (3-5) struck out the side in the eighth for the win. Paul Sewald gave up a solo homer to Alex Bregman in the ninth before retiring the next three batters to end it.

Recently signed Marwin Gonzalez hit a two-run homer and Jose Altuve had a solo shot for the AL West-leading Astros.

Houston starter José Urquidy permitted four hits and two runs in three innings in his second start since coming off the injured list.

Mitch Haniger, Kyle Seager and Ty France hit consecutive singles to load the bases with one out in the first. Abraham Toro followed with a double to right field to score two runs.

Yordan Alvarez opened the Houston second with a single and the Astros cut it to 2-1 when he slid in just before the tag to score on a double by Kyle Tucker with one out. There were two outs when Gonzalez homered into the seats in left field for a 3-2 lead.

Seager walked to open the fifth before center fielder Jake Meyers made a nifty grab for the second out of the inning to rob Toro of extra bases. Meyers stretched out at the end of a long sprint to grab Toro’s flyball and send Seager scrambling back to first.

Altuve’s 27th home run this season extended the lead to 4-2 in the fifth. The Astros had a chance to pad the lead when they loaded the bases with two outs after Anderson walked Tucker. He was replaced by Casey Sadler, who retired Meyers to leave everyone stranded.

Astros: RHP Rafael Montero (right shoulder discomfort) has started a throwing program but there is no timetable for his return. ... C Jason Castro (right knee discomfort) ran on the field Tuesday but still isn’t ready to return after last playing Aug. 25.

Mariners: Seattle is off Thursday and has yet to announce its rotation for a three-game series against Arizona that begins Friday night.

Astros: Houston also has a day off Thursday before Framber Valdez (9-5, 3.08 ERA) will start in the opener of a three-game series against the Los Angeles Angels on Friday night.