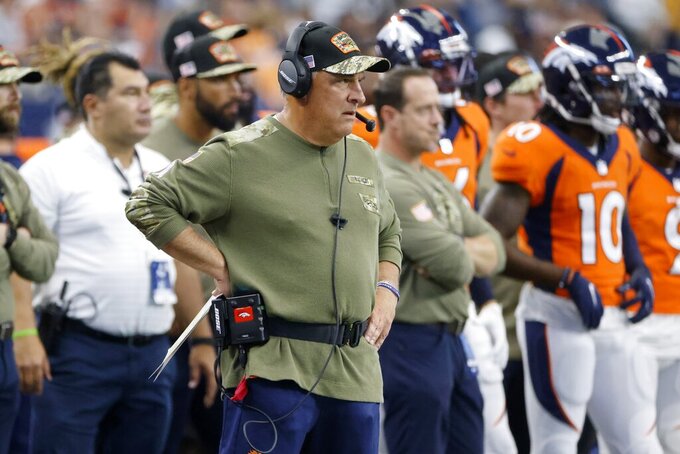 COSTA MESA, Calif. (AP) — Before Brandon Staley became one of the top young coaches in the NFL, Vic Fangio saw his potential.

But not even Fangio, who hired Staley in 2016 to be an outside linebacker coach with the Chicago Bears, could predict his rapid ascension up the ranks. The two meet on opposing sidelines for the first time Sunday when Fangio's Denver Broncos host Staley's Los Angeles Chargers.

“I don’t think we can ever predict the future and how quick things are gonna fall for someone. But I always thought he was a guy that was capable of becoming a head coach in the NFL. And obviously, he’s done well with it up to this point,” Fangio said during a conference call on Wednesday.

Staley spent three seasons with Fangio. First in Chicago (2017-18) when Fangio was defensive coordinator and then 2019 in Denver after Fangio was hired as head coach.

Staley left last year to become the Los Angeles Rams defensive coordinator, where he led the league's top-ranked defense, before being hired to lead the Chargers.

“I wouldn’t be where I am today without him because I wouldn’t have gotten that opportunity with (Rams coach) Sean (McVay) if it weren’t for Vic,” Staley said.

Staley had been studying Fangio's defense for a long time. When he was the defensive coordinator at Hutchinson Community College in Kansas in 2010-11, Staley was viewing tapes of Fangio's defenses at Stanford and then the San Francisco 49ers.

When Staley became the defensive coordinator at Division III John Carroll, he installed some of the concepts Fangio used with the 49ers. Staley showed Fangio those examples when he interviewed for the outside linebacker coach opening with the Bears in 2016, but he thought the interview wasn't going well because Fangio wasn't saying much. That ended up being a good thing.

“Vic has kind of a flair for candor. That’s one of his endearing qualities. I’m a little bit different that way. Maybe I’ll become that, but I’m not that right now," Staley said. “I think the one thing about what I’ve learned in the interview process is being open minded because I was a Division III college assistant sitting down with one of the best defensive coordinators over the last 30 years. The odds of that aren’t good. Casting a wide net and having your eyes open, your ears open because you can find coaches in a lot of different places, if you’re looking in the right spots and you’re willing to open your mind.”

When it comes to Sunday's game, both coaches will see mirror images of each other with their defenses. Both teams are ranked in the top 10 against the pass, but the Chargers (6-4) are last against the run compared to the Broncos, who are 14th. Denver (5-5) is allowing only 18.3 points per game, which is third while Los Angeles is allowing 26.5, which is 27th.

“He can watch our tape and probably call what we’re in and we probably watch his and do the same,” Fangio said. “Now, we each may be majoring in different parts of it, based on what we need to do for our personnel and who we’re playing.”

Of the seven NFL first-year coaches, Staley is the only one who has a winning record, which gives Fangio a little bit of personal satisfaction.

NOTES: Staley said there is a possibility that defensive linemen Jerry Tillery and Christian Covington will come off the reserve/COVID-19 list by the end of the week. Defensive tackle Linval Joseph is out through at least Dec. 2 as an unvaccinated positive test. ... Rookie safety Mark Webb Jr. (knee) has already been ruled out. Cornerback Asante Samuel Jr. remains in concussion protocol.