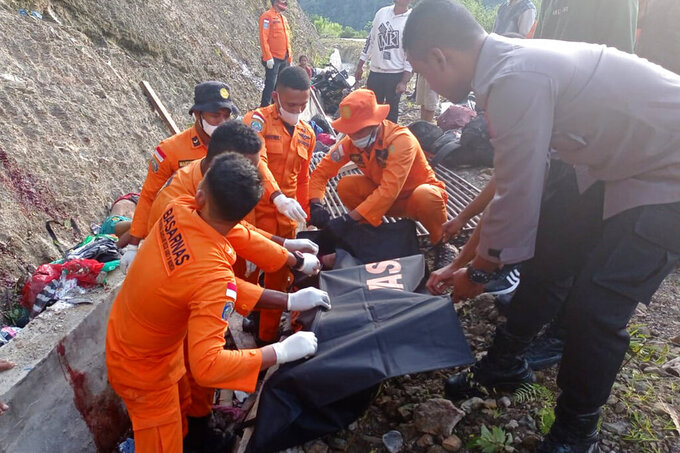 SAR Manokwari, ASSOCIATED PRESS
In this photo released by National Search and Rescue Agency (BASARNAS), rescuers put the body of a victim into a body bag after a truck accident in Manokwari, West Papua, Indonesia, Wednesday, April 13, 2022. An overloaded truck hit a cliff and flipped over near an illegal gold mine in Indonesia's West Papua province on Wednesday, killing a number of people and leaving others injured, police said. (BASARNAS via AP)

JAKARTA, Indonesia (AP) — An overloaded truck carrying 29 people hit a hillside and overturned near an illegal gold mine in Indonesia’s West Papua province on Wednesday, killing 18 people and leaving others injured, police said.

The truck, crammed with miners and their families, was headed to the capital of West Papua province Manokwari to celebrate Easter. They were on their way from a mining area in Minyambou village of Arfak Mountain district when it hit the mountain and flipped over before dawn, said local police chief Parisian Herman Gultom.

Survivors said the truck’s engine apparently lost power while going up a hill. It rolled backward before crashing, killing 13 people instantly, including a child and the driver. The other 16 were taken to two hospitals, some in critical condition, and five died while in treatment.

Television reports showed rescuers from the local search and rescue agency using their bare hands to search for the victims and struggling to bring out black body bags in half-vertical terrain.

Informal mining operations are commonplace in Indonesia, providing a tenuous livelihood to thousands who labor in conditions with a high risk of serious injury or death.

Landslides, flooding and collapses of tunnels are just some of the hazards facing miners. Much of gold ore processing involves highly toxic mercury and cyanide and workers frequently use little or no protection.

The country’s last major mining-related accident occurred in February 2019 when a makeshift wooden structure in an illegal gold mine in North Sulawesi province collapsed due to shifting soil and the large number of mining holes. More than 40 people died, buried in the mine pit.