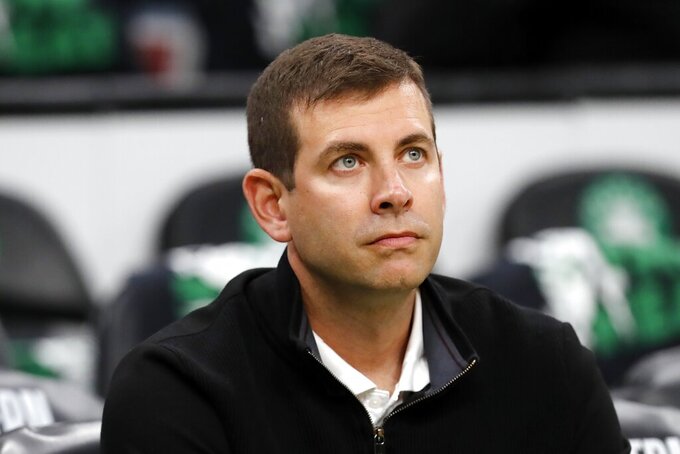 Michael Dwyer, ASSOCIATED PRESS
FILE - Brad Stevens is shown before Game 6 of the NBA basketball Eastern Conference finals playoff series against the Miami Heat, Friday, May 27, 2022, in Boston. Stevens would like to add more playmaking and depth off the bench and has been given the freedom to spend as needed this offseason. (AP Photo/Michael Dwyer, File)

He may have found both with one big move Friday.

Boston's president of basketball operations acquired combo guard Malcolm Brogdon from the Indiana Pacers for five players, all backup forwards, and a 2023 first-round pick, a person familiar with the deal told The Associated Press on condition of anonymity because the deal cannot officially be announced until next week.

Stevens, who grew up in Indianapolis and coached Butler not far from the Pacers home court, accomplished two key goals by getting Brogdon.

"I think the way that teams work together and operate together are fragile,” Stevens said after the Celtics lost to Golden State in the NBA Finals in six games. “And I think your identity as a team, when you find one that’s successful — which we did this year on the defensive end of the floor and when we were at our best sharing the ball offensively — those things are fragile. So just to add (players) doesn’t mean that you’re not taking something away from the group.”

Brogdon appears to be a perfect fit in a backcourt that already features NBA Defensive Player of the Year Marcus Smart, Jaylen Brown and Derrick White, who played a key role in Boston's postseason run.

Brogdon's biggest problem has been staying healthy. Injuries limited him to just 36 games in 2021-22 and the 29-year-old hasn't played more than 56 games since he joining Indiana in 2019.

Stevens didn't give up any of his key pieces, either. The Pacers get veteran Daniel Theis, Aaron Nesmith and Nic Stauskas — former first-round picks — Juwan Morgan and Malik Fitts. In addition to ading Theis’ physical presence, the Pacers also now have $31 million in salary cap room and will have three first-round picks next summer if the Cleveland Cavaliers make the playoffs.

The deal came as no surprise in Indiana.

After acquiring Brogdon in a trade with Milwaukee, the Pacers thought he could be a franchise building block only to have those injuries creep in. Instead, his fate was essentially sealed when Indiana acquired point guard Tyrese Haliburton from Sacramento at the midseason trade deadline.

Many thought he would be dealt on draft night, but when the Pacers didn't get the expected value, they waited.

“We’re always going to be aggressive, but there’s always certain price points,” general manager Chad Buchanan said after the draft. "Sometimes you have to walk away from deals if it’s not right for your team.”

So the Pacers drafted wing Bennedict Mathurin with the sixth overall pick and took point guard Andrew Nembhard and Kendall Brown in the second round.

They may not be finished, either. Two-time NBA blocks champion Myles Turner has long been rumored to be on the trading block and with so much salary cap room, the Pacers could continue to make a splash either in free agency or the trade market.