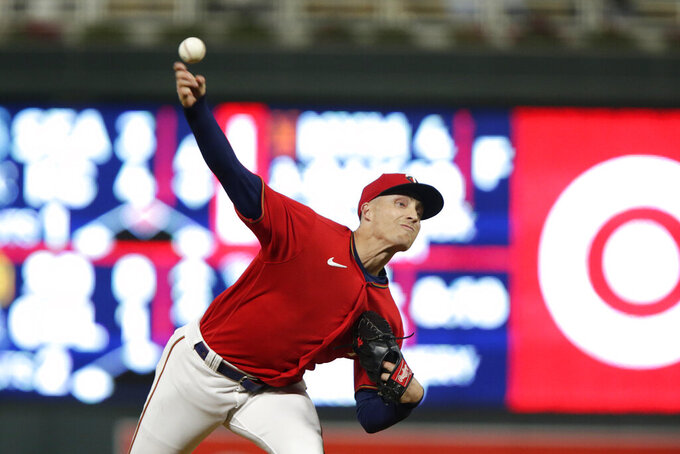 MINNEAPOLIS (AP) — Gary Sánchez drove in four runs, including a three-run homer in the fifth inning, and the Minnesota Twins snapped a five-game losing streak with an 8-4 win against the Los Angeles Angels on Saturday night.

Jose Miranda and Gio Urshela each had three hits for the Twins, who won for only the second time in 10 games. Minnesota was eliminated from contention in the AL Central on Friday night.

Sánchez hit his 15th homer of the year, and just his second in his past 23 games, on a 3-0 count against reliever Mike Mayers.

“We went out there and scored a bunch of runs, we had a lot of good at-bats,” Minnesota manager Rocco Baldelli said. “I think the approach was good. We found ways to get on top of some fastballs in a good way today.”

Griffin Jax (7-3) earned the win with a scoreless inning in relief of Twins starter Joe Ryan.

“Offense was outstanding, so that was a bright spot,” Ryan said. “Always good to see that and to get the win is huge. But, personally, it’s definitely frustrating. But as a team, good energy back in the clubhouse feels great. Carry that to tomorrow and the next couple of road trips.”

“There has been a lot of good and a lot of bad,” Detmers said of his season, which includes a no-hitter. “There are a lot of good things I can take from but there’s also some stuff I can learn from. I’m probably going to take the bad stuff with me into the offseason."

Los Angeles’ first three runs came in the third. Mike Trout hit an RBI double and Shohei Ohtani had a two-run single, but the Angels lost for the third time in four games.

“Every one of these is a learning experience for somebody who is really in his first year from wire to wire,” Angels interim manager Phil Nevin said of Detmers. “He’s done some really good things and these experiences are only going to benefit him next year."

Ryan is wrapping up his first full season in the majors and has already eclipsed his professional high with 144 innings. He has 143 strikeouts with Minnesota this season, one off the team’s rookie record set by Francisco Liriano in 2006.

“Frustrating,” Ryan said. “Anytime I’m not going past six, it’s kind of annoying. Definitely frustrating to put that one on the bullpen. They’ve been throwing a lot this year. That’s always going to be tough.”

Saturday marked the first time this season Ohtani and Trout each recorded multiple RBIs in a game and the Angels lost.

Angels: INF David Fletcher (bruised right hand) is taking swings. He’s been out since Sept. 17 after he was hit on the hand a second time in recent weeks.

Twins: A day after shutting down All-Star OF Byron Buxton for the season and announcing he’ll have knee surgery, Baldelli shed a bit more light on the knee trouble, saying Buxton was dealing with the issue since early April. “He was in a state pretty early in the season where reasonable arguments or just reasonable people would say he’s not able to play,” Baldelli said. “And he refused to hear any of that. He, again, in early April, this is at the very beginning of the season, was struggling to perform even some of the most basic things that you would need to do to show up for the game.”