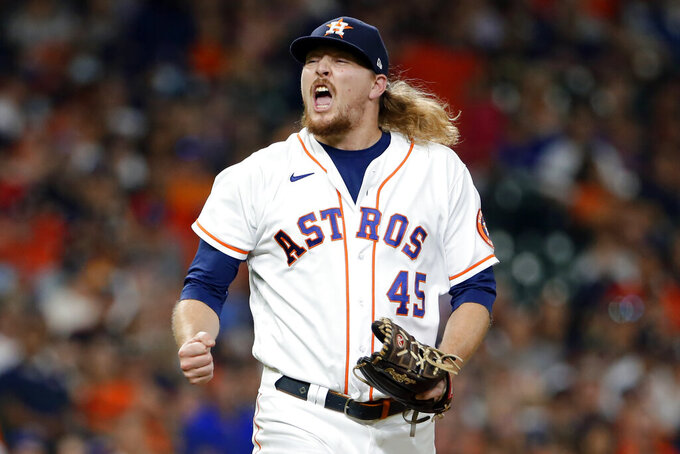 HOUSTON (AP) — Framber Valdez used so many pitches as he struggled to find the zone early on Saturday night that he was forced to leave the game after the sixth inning without giving up a hit.

Houston's bullpen took over after the left-hander was pulled and lost the no-hit try in the eighth inning as the Astros sent the Texas Rangers to their season-worst 11th straight loss, 4-1.

Valdez (6-2) needed 99 pitches to get through six innings, his count built up by walking a career high-tying six.

Manager Dusty Baker said there was no thought of sending Valdez out for the seventh.

After Bryan Abreu extended the no-hit bid through seven, Ryne Stanek came on in the eighth and Isiah Kiner-Falefa hit a single on his second pitch. Center fielder Myles Straw sprinted in and made a diving attempt to catch the ball, but it bounced just in front of his glove.

Baker wasn't surprised that it was Kiner-Falefa who got the first hit for the Rangers.

“That was the one guy in their lineup that’s going to put the ball in play," he said. “If anybody was going to break it up over there, it was going to be him."

The Rangers have already been no-hit twice this season, by Joe Musgrove of the San Diego Padres on April 9 and Corey Kluber of the New York Yankees on May 19.

“We have to mature into the ability to (execute) if we're going to survive in this league," manager Chris Woodward said. “It’s a good test and a good conversation we’re going to have tomorrow."

There have been seven no-hitters in the majors this year, one short of the big league record set in 1884, the first season that overhand pitching was allowed.

A half-hour or so before the Astros' bid was broken up, Patrick Sandoval of the Angels lost his no-hit try with one out in the ninth inning at Minnesota.

Yordan Alvarez homered in the seventh and Carlos Correa added two RBIs for the Astros, who won their 60th game.

Andy Ibáñez got the Rangers on the board when he hit a home run off Ryan Pressly onto the train tracks above left field with one out in the ninth. Pressly walked pinch-hitter Brock Holt with two outs but struck out pinch-hitter Joey Gallo to end it.

The losing streak by the Rangers is the third-longest in franchise history and the most since the team dropped 12 straight in 1982. Texas has lost nine games since the All-Star game and is the only team in the majors to go winless since the break.

Valdez struggled with command, and four of his six walks came in the first two innings. The 27-year-old lefty settled down after the second and retired 12 of his last 14 batters.

“I recognized that I wasted a lot of pitches," Valdez said through a translator. “I know what I need to do and I know I need to make adjustments so I can get deeper into games."

Texas starter Kyle Gibson (6-3) was done in by walking a career-high eight in six innings to lose his third straight game.

“That was pretty gritty, I trust this guy more than anybody," Woodward said. “For him to go six and walk eight and only give up two earned runs, that’s pretty remarkable."

It was the most walks allowed by a Rangers pitcher since Colby Lewis also walked eight on April 10, 2003, against Oakland.

An All-Star this season, Gibson allowed four hits and two earned runs. It could be his last start for the Rangers with the trade deadline approaching next week and Texas likely to be sellers in the coming days.

Gibson walked three of the first four batters to load the bases with one out in the first. He then walked Correa to put Houston up 1-0, but retired Kyle Tucker and Abraham Toro to limit the damage.

Gibson ran into trouble again in the third after Michael Brantley drew a walk with no outs before a double by Yuli Gurriel. Brantley scored on a sacrifice fly by Alvarez that made it 2-0.

Correa followed with another sacrifice fly to send Gurriel home and put Houston up 3-0.

Rangers: Gallo was out of the starting lineup, but Woodward said he was fine, and it was just to give him a rest.

Astros: 3B Alex Bregman (strained left quadriceps) said he would be starting a rehabilitation assignment with Triple-A Sugar Land in the next couple of days. Bregman will likely need several games in the minors after sitting out since June 17. ... RHP Josh James left Houston to resume a rehabilitation assignment with Sugar Land after a setback with a sore hamstring. James has not played this season while recovering from off-season hip surgery.

Gibson refused to use the trade rumors as an excuse for his recent struggles, but he did admit that the last couple of weeks have been difficult as they’ve swirled.

“I think if you’re human and you’re being honest it has an impact,” he said.