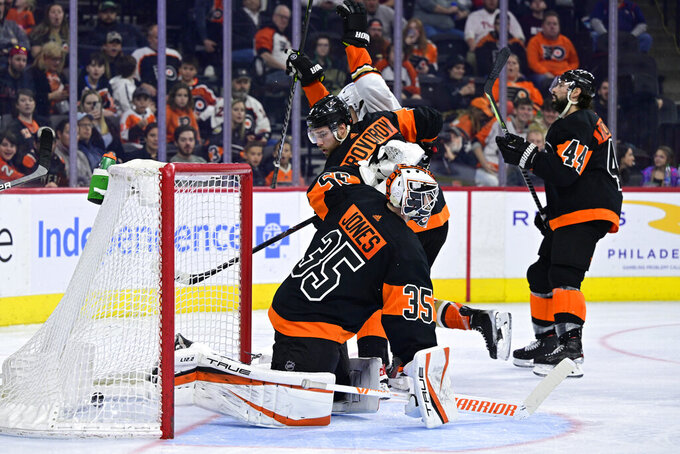 Derik Hamilton, ASSOCIATED PRESS
Philadelphia Flyers goaltender Martin Jones (35) is unable to make a save on a goal scored by Anaheim Ducks' Troy Terry during the third period of an NHL hockey game, Saturday, April 9, 2022, in Philadelphia. (AP Photo/Derik Hamilton)

PHILADELPHIA (AP) — Trevor Zegras scored two goals to lead the Anaheim Ducks to a 5-3 victory over the Philadelphia Flyers on Saturday night.

Sonny Milano, Zach Aston-Reese and Derek Grant also scored for the Ducks. They opened a four-game trip by winning for just the second time in the last 15 contests.

Anaheim recovered from a sluggish first period in which they were outscored 2-0 and outshot 16-6.

“It was a bad period,” Ducks coach Dallas Eakins said.

Eakins said he delivered a one-voice message during the intermission.

“I didn’t yell or anything, just wanted them to get in their own heads and visualize what their games were like,” he said. “Just settle down, reset, play a two-period game. Didn’t need to kick garbage cans or yell.”

The Ducks took it from there.

Milano followed a rebound from close range 3:06 into the second, Aston-Reese’s deflection of Adam Henrique’s shot from long range got past Flyers goalie Carter Hart to tie it at 2 just 1:32 later and Zegras put the Ducks in front with his first tally, a hard slap shot from near the side boards with 5:47 left in the period that made it 3-2.

“Not ideal but we flipped the script in the second,” Zegras said. “They did a great job in the first period, but we turned it around.”

After the Flyers tied it at 3 early in the third, Zegras netted the go-ahead goal with 8:22 remaining.

He deked from his forehand to his backhand behind the net and sent a pass toward the net that went off Provorov and high over Hart’s glove for his 20th goal. The goal originally was credited to Troy Terry before being changed after the contest.

“We get to see (Zegras) in practice,” Eakins said of the spectacular play.

“We came out with the right mindset,” Flyers interim coach Mike Yeo said. “Obviously, got off to a hot start and probably just assuming that maybe we thought it was gonna be a point night and wanted it easy in the second period. We stopped being physical. Execution was a big problem, through the neutral zone especially. And I thought just 1-on-1 battles and the hardness of our game was lacking, and we let them take the momentum and run with it.”

The game pitted a pair of teams near the bottom of their conference standings.

The Flyers entered 14th of 16 teams in the Eastern Conference with 57 points while the Ducks were 12th of 16 clubs in the West.

Jamie Drysdale added a pair of assists for the Ducks.

Grant provided Anaheim with a two-goal cushion by redirecting Andrej Sustr’s long pass into the net from close range with 5:27 to play.

The Flyers scored the only two goals in the first, with Sanheim’s wrister just 1:39 into the contest putting the club on the board and Attard netting his first career goal from long range just 1:11 later.

The Flyers honored longtime PA announcer Lou Nolan during a pregame ceremony. Nolan has been the club’s PA announcer for 50 years, and the Flyers all wore the No. 50 during pregame warmups and had on a No. 50 patch on their game jerseys.

Ducks: Ryan Getzlaf (lower body) was out of the lineup for the second straight game following his retirement announcement on Tuesday. Anaheim’s captain is on the road trip with the club.

Flyers: LW Joel Farabee missed the game with the flu.

Ducks: At Carolina on Sunday night

Flyers: At Washington on Tuesday night.