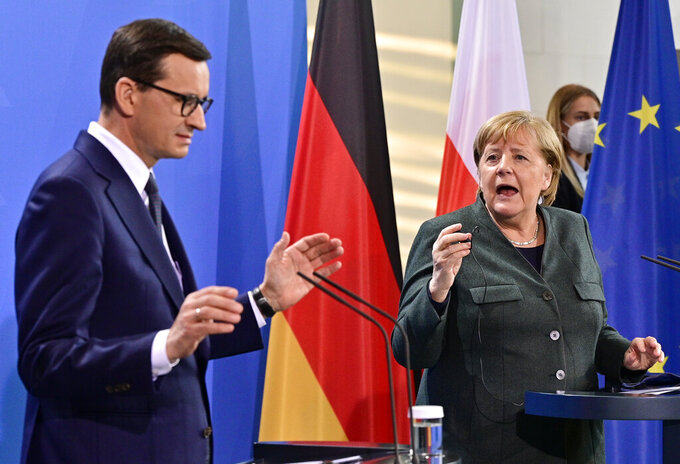 Merkel reiterated her accusation that Belarus was carrying out a “hybrid attack” by luring migrants to the country and then sending them to the Polish border in an effort to destabilize both Poland and the European Union as a whole.

“Therefore full solidary with Poland on the one hand, and on the other hand I want to of course express very clearly that this is an issue between the European Union and Belarus, and that's why everything that happens bilaterally needs to be coordinated,” she told reporters after a meeting in Berlin with Polish Prime Minister Mateusz Morawiecki.

Her comments were seen as a response to Polish criticism that she had failed to coordinate with Warsaw before recently reaching out to Belarusian leader Alexander Lukashenko. After Merkel's call, Belarus began repatriating some migrants back to Iraq.

Merkel said the EU would impose additional sanctions on Belarus “if no progress is seen.”

She also stressed the role that Belarus' close ally Russia could play in putting pressure on Minsk. That sentiment was echoed by Morawiecki, who said that there was a “cordial request (to Putin) to exert influence on the situation in Belarus.”

Morawiecki said trade sanctions would be a powerful instrument against Belarus.

Separately, Merkel lamented that Putin had refused her suggestion for a summit on the situation in Ukraine.

“I greatly regretted that neither the Russian president nor the Russian foreign minister were prepared to hold one more high-level meeting under the Normandy format before the end of my time in office,” Merkel said, referring to the four-way talks between Russia, Ukraine, Germany and France.

Such talks have been staged repeatedly over the years to resolve tensions between Ukraine and its neighbor Russia, with limited success.

“This would have been a good signal that all sides are interested in a solution to the Ukraine issue,” Merkel said. “This, sadly, didn't happen.”