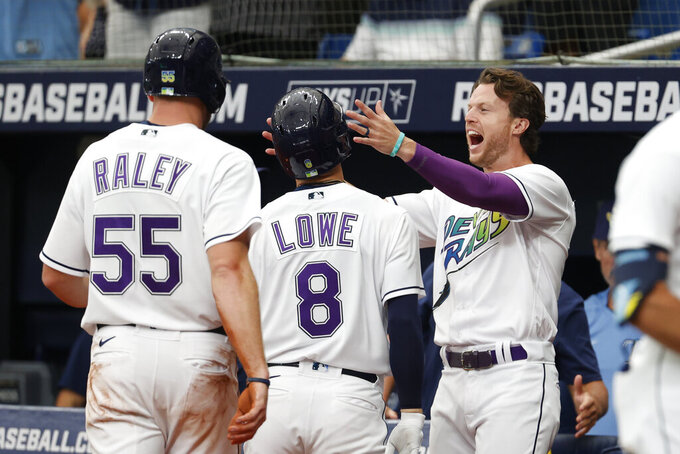 The Rays had dropped two consecutive games, getting one run and 10 singles in 18 innings over the stretch.

“The offense came out hot today and put some runs on the board,” Rays starter Corey Kluber said. “Turned into a win there I think we probably needed really badly.”

Tampa Bay is 3-6 since the All-Star break.

Kluber (7-6) allowed four runs and eight hits with a season-high 10 strikeouts in six innings and improved to 2-0 in two career starts against Cleveland, where he won the AL Cy Young Award in 2014 and 2017.

“You know what, the guy knows how to pitch,” Cleveland manager Terry Francona said. “He's got a little different, the way he attacks hitters than he used to, but he can manipulate the ball with the best of them.”

Pete Fairbanks struck out José Ramírez on three pitches with two on and two outs in the ninth to get his second save.

Andrés Giménez homered for the Guardians, who are 5-5 on an 11-game road trip.

Just as the game was ending, the Rays announced that they acquired ourfielder David Peralta from the Arizona Diamondbacks in exchange for minor league catcher Christian Cerda.

Lowe connected on a two-run homer in the first and René Pinto had a second-inning RBI double off Zach Plesac (2-9) as Tampa Bay took a 3-0 lead.

Díaz’s two-run shot in the fifth put the Rays ahead 5-1.

Brett Phillips, who had seven hits in his previous 89 at-bats, had an RBI single with two outs in the eighth that made it 6-4.

The Rays gave away a Devil Rays basketball jersey with Phillips' name on it to fans in attendance.

Owen Miller had a fourth-inning, run-scoring single before Giménez got Cleveland within 5-4 on a three-run drive in the sixth.

Miller left with a bruised right forearm and was pinch-hit for in the eighth.

Retired umpire Joe West was at the ballpark taking part in a documentary. He spent time on the field with former umpire Richie Garcia and members of the umpiring crew working the weekend series.

Phillips grew up a Devil Rays fan in nearby Seminole, Florida, and played basketball with his neighbor, pro wrestler Macho Man Randy Savage.

“Here we are in my hometown, a giveaway ... Crazy, absolutely crazy,” Phillips said.

Guardians: 1B Josh Naylor was scratched due to right ankle soreness and will be evaluated when the team returns home after Sunday's game. Francona said it is the same ankle Naylor severely hurt in a scary collision chasing a fly ball in June 2021 that required surgery.

Rays: LHP Jalen Beeks (right lower leg tightness) was reinstated from the 15-day IL and RHP Luke Bard was optioned to Triple-A Durham. ... RHP Tyler Glasnow (Tommy John surgery, Aug. 2021) threw off a bullpen mound. He is not expected back until next year.

Rays All-Star Shane McClanahan (10-3, 1.76 ERA) is Sunday’s starter. The lefty has gone six or more innings and allowed two earned runs or fewer in 13 consecutive starts. It’s the majors longest stretch since the Chicago Cubs’ Jake Arrieta had a 14-game run from July 30, 2015 to April 4, 2016. Cleveland has not announced its starter.