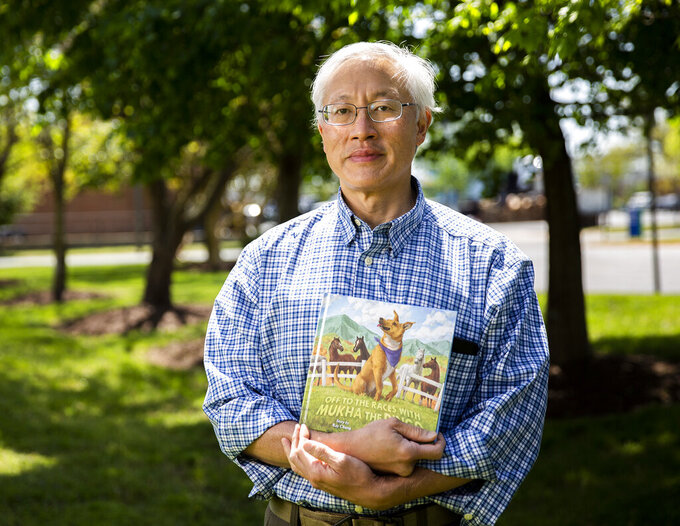 TRISTAN LOREI, ASSOCIATED PRESS
Dr. Ray Chung stands outside his office with his book, "Off to the Races with Mukha the Dingo", in Fredericksburg, Va., on Thursday, Apr. 28, 2022. (Tristan Lorei/The Free Lance-Star via AP)

He used some of his creative skills to modify a handful of commonly used surgical instruments, but his love for his rescue dog Mukha and the peaceful life his family and the dog once enjoyed at their country home in Rapidan inspired Chung to create a children’s book.

“I thought it might be a nice way of entertaining children and providing them with a glimpse of life in the country to which they might not otherwise have had exposure,” Chung, a Fredericksburg orthopedic hand surgeon said. “Putting the pieces together, I wondered what would happen if Mukha ended up at a steeplechase race.”

Released on April 11 and published by Belle Isle Books of Richmond, “Off to the Races With Mukha the Dingo” is 40 pages, and Chung said it’s not only fun for children 2 and older, but it also provides several life lessons sandwiched between colorful illustrations by Boston-based artist Emily Hurst Pritchett.

“The book was meant originally as kind of an entertaining book, just more of a fun thing highlighting some facets of life in Central Virginia,” Chung said.

Chung calls his new children’s book a true “resilience story” that includes many of the challenges Chung himself faced early in his life.

“I really didn’t have a good feeling about asking for help,” Chung said. “It kind of sounds strange, but I guess one of the story lessons is: It’s OK to ask for help.”

Chung, who practices at the Orthopedic Specialty Clinic, which will soon merge with Mary Washington Orthopedics, said his book centers around the innocent adventures and good fortunes of his Carolina dog Mukha, who died in 2020.

“After Mukha’s unexpected passing, (writing the book) took on special meaning as a way to memorialize her,” Chung said.

Chung said he chose a country steeplechase horse race and the people and events that surround it as the primary setting for the story. Chung said these type of events are not uncommon near his rural home in the Piedmont region of the state, or at any country setting across America where horses can be found.

Steeplechase racing pits horses against a number of obstacles along the route, such as fences, water or ditches. Before making its way to America, the event first gained popularity in Ireland in the 18th century, when riders relied on church steeples as points of reference along a route.

The book’s story begins when Mukha jumps into the bed of the family pickup truck and wonders where her family is going after seeing large coolers and a number of folding tables and chairs stuffed into the truck’s bed, but Mukha’s daydreaming is quickly cut short when the family piles into the truck and drives off.

The truck eventually makes it to the race site, where Mukha sees many people gathered, including “ladies in lovely hats and men wearing tweed jackets,” but a bump in the road abruptly knocks the dog out of the truck into a soft pile of leaves. As Mukha begins running to catch up with her family, she sees a “no dogs allowed” sign posted on the fairgrounds so she takes cover, worried she may end up in “dog jail” if caught, all the while wondering where her lost family might be.

Mukha believes a pack of terriers running together on a nearby racetrack might know her family’s whereabouts, so she jumps into the race, only to be ignored by the dogs who are too busy trying to cross the finish line. As Mukha crosses the finish line, the announcer tells the crowd, “Attention, everyone. The winner of the terrier race finals is … A dingo? Was that a dingo?”

Mukha then finds herself helping a man who is struggling carrying supplies and a cooler, but she runs away after helping the man who exclaims, “I think that was a dingo.”

Later, as Mukha grows hungry and attempts to grab a snack from a nearby food table, she ends up saving a tray of food from falling off the table and a human thanks her as the people at the fairgrounds ask, “Was that a dingo?” as Mukha runs off to win the woman’s hat contest.

Mukha eventually finds her family during the grand finale steeplechase race, but not before picking up a couple of first-place awards and getting recognition from race officials.

“We also have it on good authority that your dingo was quite helpful to attendees throughout the day, and she set a good example for these children,” the race official told Mukha’s family.

Joan Evans of Culpeper recently read the book for her three grandchildren, ages 10, 7 and 6. Evans believes Chung did a great job telling a “wonderful story” that held her grandchildren’s attention the entire 40 pages.

“It’s delightful. I loved the book,” Evans said. “The fourth grader, you’d think a picture book wouldn’t keep their attention, but it did. He really enjoyed it. It’s a good book for all ages.”

As for his future as an author, Chung said he has a collection of written work featuring Mukha and her siblings that highlights their adventures in and around their country home. He believes he has enough material on hand to get creative at writing again.

“I would like to have them published as well,” Chung said.

Paperback versions of “Off to the Races with Mukha the Dingo” are available online for $13.95, while hardback copies are selling for $24.95.