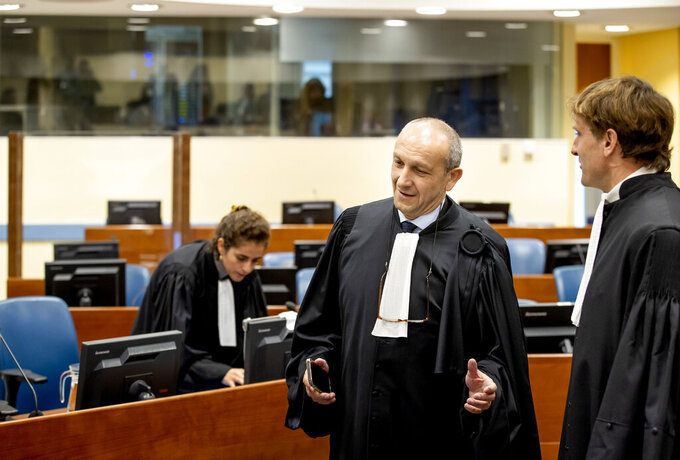 THE HAGUE, Netherlands (AP) — Defense lawyers for an elderly Rwandan businessman accused of inciting and financing murderous militias that slaughtered men, women and children during the African nation's 1994 genocide told United Nations judges Friday that prosecutors built a weak and unsubstantiated case aimed at turning him into the “perfect culprit.”

The defense opening statement came a day after prosecutors opened Kabuga’s trial by saying he played “a central role in provoking hatred of Tutsis, dehumanizing innocent civilians and paving the way for genocide.”

Kabuga, 87, did not show up in court for the first two days of his trial, amid an ongoing conflict about his legal representation. He is the last major suspect in the genocide to face trial at the U.N. court.

He was arrested near Paris in May 2020 after years on the run from justice and transferred to the mechanism, a court in The Hague that deals with remaining cases from the now-closed U.N. tribunals for Rwanda and the Balkan wars. Kabuga’s lawyers argued unsuccessfully that he was not fit to stand trial.

The mass killing of Rwanda’s Tutsi minority was triggered on April 6, 1994, when a plane carrying President Juvénal Habyarimana was shot down and crashed in the capital, Kigali, killing the leader who, like the majority of Rwandans, was an ethnic Hutu.

Tutsis were blamed for downing the plane. Bands of Hutu extremists began slaughtering Tutsis and their perceived supporters, with help from the army, police, and militias. In a 100-day genocide, some 800,000 people were killed, many of them hacked to death with machetes.

Kabuga, was one of Rwanda's wealthiest businessmen and had close links to the political elite at the time the genocide unfolded. He is accused of inciting genocide using the Radio Télévision Libre des Mille Collines (RTLM) broadcaster he helped establish and of raising funds and buying weapons and other supplies for the Hutu militias known as the Interahamwe.

But his lawyers dispute that version of events and told judges the prosecution case was constructed to implicate Kabuga.

Defense lawyer Emmanuel Altit said prosecutors built a faulty narrative "around the name of Félicien Kabuga To turn him into the perfect culprit.”

The first prosecution witness is scheduled to testify next week in a trial that is expected to last many months.