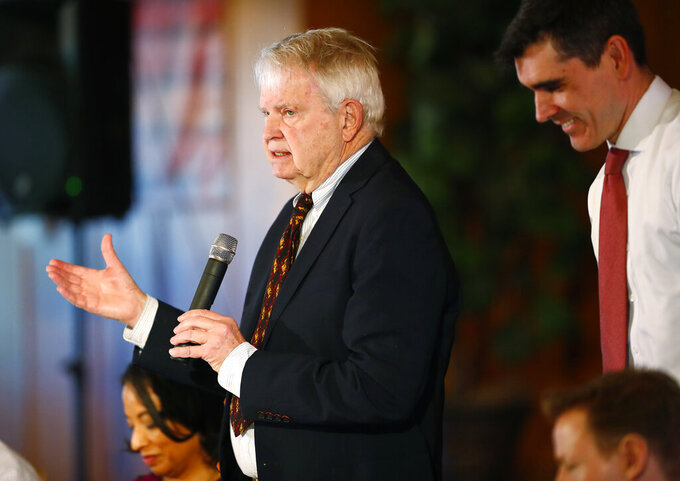 David Zalubowski, ASSOCIATED PRESS
FILE - In this March 10, 2018, file photo, former Colorado Gov. Dick Lamm, left, speaks as Chris Dempsey, co-chair of the No Boston Olympics initiative, listens during a meeting about Denver submitting a bid to host a future edition of the Winter Olympics in Denver. Lamm, who successfully fought to stop the 1976 Winter Olympics from being held in Colorado even though they had been awarded to the state, passed away late Thursday following complications from a pulmonary embolism suffered this week, his wife, Dottie Lamm, said in a statement issued Friday, July 30, 2021. He was 85. Lamm served three terms as governor from 1975 to 1987. (AP Photo/David Zalubowski, File)

DENVER (AP) — Former Colorado Democratic Gov. Richard “Dick” Lamm, who successfully fought to stop the 1976 Winter Olympics from being held in Colorado even though they had been awarded to the state, has died. He was 85.

Lamm served three terms as governor from 1975 to 1987. As a state lawmaker and environmental activist, he campaigned against having Denver host the 1976 games, arguing it would damage the environment and cost the state. Colorado voters rejected spending state funds on the Games, and they were relocated to Innsbruck, Austria.

Lamm once said he was treated as a “pariah” by the business community over the affair, but he feared the Games would be economically and environmentally devastating.

“Gov. Lamm took on tough issues, and he never shied away from civil political discourse and embraced collaboration,” Democratic Gov. Jared Polis said in a condolence message Friday. "Gov. Lamm’s legacy and leadership will be remembered in our state’s history as well as his work to make Colorado an even more amazing place.”

Lamm was born on Aug. 3, 1935, in Madison, Wisconsin. He received a bachelor’s degree from the University of Wisconsin and a law degree from University of California, Berkeley. He also served in the U.S. Army. In 1962 he became an attorney for the Colorado Anti-Discrimination Commission, and from 1965-1974 had his own law practice.

He and his wife, Dottie, married in 1963. Dottie Lamm is a women's rights activist and a former Denver Post columnist.

Dick Lamm served as a state representative from 1966 to 1974 before becoming governor. He was elected to three terms, before Colorado restricted governors to two terms in office.

He ran unsuccessfully for a U.S. Senate nomination to replace Sen. Tim Wirth. In 1996, he sought the presidential nomination for the Reform Party, losing to Ross Perot of Texas.

Lamm swept into Colorado politics as a John F. Kennedy idealist but years later came to be nicknamed “Governor Gloom,” a realist focused on the nation’s future.

As a legislator, he pushed through one of the first pre-Roe vs. Wade abortion laws. It became a national model.

“I decided that would probably be the end of my career, but it just seemed to me outrageous that you would force unwilling women to have unwanted children,” Lamm told The Associated Press in a 1996 interview. “I just can’t not fight for what I believe in.”

Lamm spent much of his last term as governor writing and speaking on the fiscal irresponsibility of his generation and what he called the need to rein in immigration and curtail entitlement programs such as Social Security. He opposed the death penalty as governor but endorsed it after leaving office.

Lamm initially had the benefit of a Democratic House to help him pass legislation focusing on land use, equal rights, mining severance taxes and growth management. But a Republican wave overtook the Legislature two years into his administration. From then on Lamm battled two hostile chambers.

The Legislature reined in the power of the executive branch after deciding Lamm had gone too far with growth management policies.

After leaving politics, Lamm served as executive director of the University of Denver’s Center for Public Policy and Contemporary Issues and co-authored several books. He was an outdoor enthusiast and enjoyed hiking, mountain climbing and skiing.

He and his wife had two children, Scott Hunter Lamm and Heather Susan Lamm.