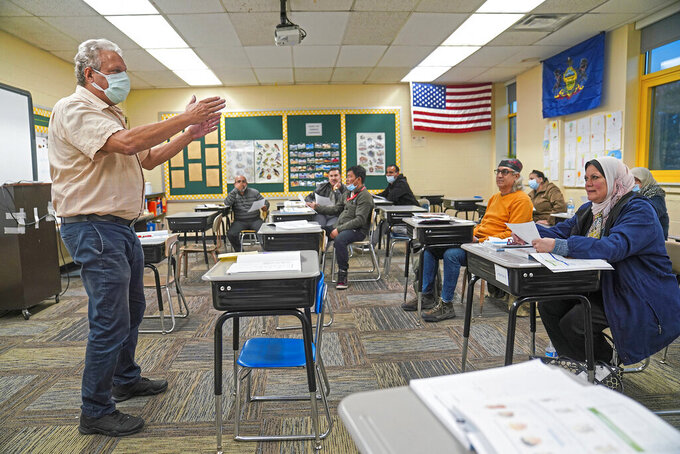 Steve Mellon, ASSOCIATED PRESS
An animated David Temple teaches English to adult immigrants and refugees at Carnegie Elementary School in Carnegie on Tuesday, Oct. 26, 2021. The Carlynton School District has partnered with Literacy Pittsburgh to provide free adult English classes to the parents and guardians of immigrant and refugee children in the district. (Steve Mellon/Pittsburgh Post-Gazette via AP)

CARNEGIE, Pa. (AP) — David Temple goes around the second-floor classroom at Carnegie Elementary School bouncing from student to student as he examines their homework.

The students, sitting at small desks, leaf through their workbooks and compare their answers to those seated around them as they wait for Mr. Temple to reach them.

This would be a typical scene during the day at Carnegie — one of two elementary schools in the Carlynton School District — but this was not a normal class. Instead of elementary students, adults from many nations filled the room — immigrants and refugees eager to learn and improve their English language skills at night at a school where many of their children attend during the day.

“They cannot get it fast enough,” Mr. Temple said during a short class break on a Tuesday evening in October. “They so want to be, not integrated into the society, but they want to know what’s going on.”

Carlynton began a first-of-its-kind partnership with Literacy Pittsburgh this year to offer four adult English classes each week for parents and guardians of immigrant and refugee children in the district and others in the community.

Mr. Temple, a longtime English as a second language teacher who volunteers with Literacy Pittsburgh, leads the classes attended by students from mostly South American and Middle Eastern countries.

The classes allow the district to build trust with parents of students in the district who may need more help because of their language barrier. And students in the class have a variety of motivations, from wanting to better understand the world around them to helping their children with schoolwork.

Nai Ong Hlain Paing Nyan, an immigrant from Mon State, Myanmar, said he was excited for the opportunity to learn English at the same school his children — a boy and girl — attend during the daytime.

“I’m so happy to come to class because my children come here, too,” he said. “I want to help my children.”

The idea for the adult English classes developed over a period of time that began with a desire by Carlynton teachers and staff to better address the mental health needs of students about two years ago, according to Donald Alexander, a second grade teacher at Carnegie.

The school reached out to Allegheny Health Network and adopted a program called the Chill Project, which provides counseling services to families and gives students a physical space in the school building to go to if they experience anxiety. The program helped the district, but some families were still not getting the full benefit.

“What we noticed was we were having a really hard time reaching parents of students who did not speak English, or (we) had troubles when we were trying to meet with these families and use a translator,” Mr. Alexander said.

Mr. Alexander contacted Gisele Barreto Fetterman, the second lady of Pennsylvania and a former undocumented immigrant, whom he had never met but recognized as someone from the community who may be able to help with issues affecting immigrant and refugee families. Ms. Fetterman, an ambassador for Literacy Pittsburgh, suggested that the school contact the organization to see if they could work together, and it eventually led to the adult English classes.

The communities that make up the Carlynton School District — Carnegie, Crafton and Rosslyn Farms — have a below average but growing immigrant populations. The district serves 95 ESL students in grades K-12, representing 16 different languages.

Learning English takes active engagement, Mr. Temple said. He moves through various activities during the 90-minute classes and keeps his students alert by calling on them to participate.

He starts off one evening’s class going over multisyllable words.

“Does anyone have a three-syllable word?” he asks.

A woman raises her hand and says, “Daughter?”

“How about a four-syllable word?” Mr. Temple asks. No one answers this time.

He moves the class on to other exercises.

“How tall are you?” Mr. Temple asks a woman.

He moves on to another student. “How tall are you?” he asks a man.

Before the class ends, he asks the students if they know about Halloween and trick-or-treating. He explains that little boys and girls dress up in costumes and go door to door with bags collecting candy.

To ensure that as many people as possible could take advantage of the classes, the school opened them to any immigrant or refugee in the community — not just parents of students in the district. The school advertised the classes at the Attawheed Islamic Center in Carnegie, which helped it boost the program’s numbers.

About 20 students from Colombia, Ecuador, Egypt, Iraq, Libya, Syria, Turkey, Uzbekistan and elsewhere attend classes each Tuesday and Thursday, with those less proficient in English coming in the early evening and those with a better grasp of the language coming later at night.

Literacy Pittsburgh buys the class textbooks and materials, in part, through funding from the state Department of Education. Donations from private individuals, corporations and foundations have helped to supply other materials.

Mr. Alexander said he has witnessed the confidence of students grow just in the first several weeks of the classes. But even more important than their language skills, he said, is that the class is creating a level of support and inclusion for some in the Carlynton community who may otherwise feel left out.

“I don’t just want the kids to feel comfortable when they’re here,” Mr. Alexander said. “I want their families to feel welcome, as well, and I really want to see them feel like they have a future here in Carnegie.”