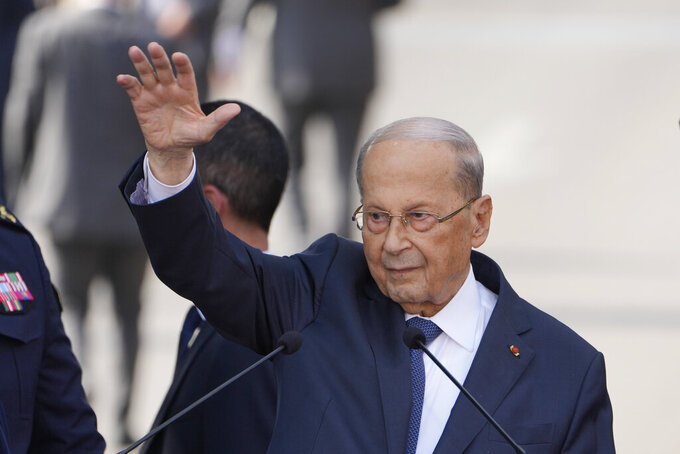 Bilal Hussein, ASSOCIATED PRESS
Lebanese President Michel Aoun waves for his supporters during a speech to his supporters gathered outside the presidential palace in Baabda, east of Beirut, Lebanon, Oct. 30, 2022. Lebanon has been without a president for over a month, and its legislators since late September have been unable to vote for a new president. President Aoun completed his six-year term on Oct. 30. Lebanon’s deeply-divided parliament has met nine times to elect a successor and failed every time, worsening political paralysis and stalling measures to alleviate a crippling economic crisis that has pulled three-quarters of the population into poverty. (AP Photo/Bilal Hussein)

BEIRUT (AP) — Lebanon has been without a president for over a month, its legislators unable to agree on a new head of state.

The impasse is holding up a range of initiatives, from putting into place structural reforms for an International Monetary Fund program to allowing the country’s state-owned television channel to broadcast the World Cup.

Here is a look at the latest episode of political paralysis in the crisis-hit country.

WHAT IS BEHIND THE DEADLOCK?

President Michel Aoun, an ally of Iran-backed Hezbollah, completed his six-year term on Oct. 30. Lebanon’s deeply-divided parliament has met nine times to elect a successor and failed every time, worsening political paralysis and stalling measures to alleviate a crippling economic crisis that has pulled three-quarters of the population into poverty.

The weekly sessions have become farcical with most legislators casting blank ballots. Others have written in mock candidates, including late former presidents Nelson Mandela of South Africa and Salvador Allende of Chile. Parliamentarians often leave the session midway through, resulting in no quorum.

The tiny country’s latest spell of paralysis also comes as it scrambles to rekindle strained ties with Saudi Arabia and other Gulf states, which once kept Lebanon flush with cash. Hezbollah’s dominance in Lebanese politics over the past decade and their backing of Yemen’s Houthi rebels against the Saudi-led coalition has angered Riyadh. In 2021, Saudi Arabia banned agricultural exports from Lebanon, nominally due to shipments being used to smuggle drugs, and later that year banned all Lebanese exports after a minister called Saudi Arabia’s war in Yemen “absurd.”

“Saudi Arabia is clearly linking Yemen and Lebanon dossiers in its negotiations with the Iranian side,” Carnegie Middle East Senior Fellow Mohanad Hage Ali said. “​​It’s trying to assert itself as a main stakeholder, and that renewed interest could relate to them seeing a potential benefit that could be translated in Yemen.”

“In order to elect a president in Lebanon, you first need to find a consensual figure who is not vetoed by major Lebanese players, and who is vetted and okayed by regional powers,” said Karim Emile Bitar, Professor of International Relations at Beirut’s Saint Joseph University. “So far you have a tug-of-war between the Iranian-Syrian axis backing Hezbollah and on the other hand the alliance that is closer to the United States and Saudi Arabia.”

The country has frequently witnessed political paralysis in its short and troubled history, including a presidential vacuum of over two years before Aoun’s election in 2016. In 2008, armed clashes erupted for a week, before politicians gathered in Doha, Qatar to reach a settlement for a consensus presidential candidate.

Ibrahim Mneimeh, an independent reformist legislator, says the impasse has become the “status quo” and believes traditional parties are waiting for “foreign interference” for a settlement.

“Unfortunately this is happening over and over again.” Mneimeh said.

WHO ARE THE CANDIDATES?

Under Lebanon’s power-sharing system since its independence from France in 1943, a president has to come from the Maronite Catholic sect; the prime minister is a Sunni and the parliament speaker a Shiite.

While Hezbollah has yet to publicly name a candidate, public perception is that the group backs Sleiman Frangieh, a close ally of the party and of Syrian President Bashar Assad. The nominal candidate of the camp opposing Hezbollah and that often describes the group as a state-within-a-state is parliamentarian Michel Moawad. Both candidates come from established political families.

Moawad has received more votes than any other candidate, but has failed to garner a majority and is widely seen as too divisive a figure to reach the presidency. Meanwhile, Lebanese army chief Gen. Joseph Aoun has reportedly been discussed as a possible consensus candidate, though his name has not yet appeared on the ballot.

Parliamentarian Gebran Bassil, the son-in-law of President Aoun, the head of the Free Patriotic Movement party, and an ally of Hezbollah, has long been seen as Aoun’s successor of choice. Though he appears out of the running due to limited popular support and being targeted by U.S. sanctions, he and his party have not yet endorsed another candidate.

WHAT ARE THE REPERCUSSIONS?

With no developments to break the impasse, most experts say that political blocs will focus on trying to extract maximum political concessions, including divvying up the appointment of ministerial and senior government posts.

A Western diplomat who had met with most of Lebanon's political blocs told The Associated Press that they are playing a “waiting game.”

Hage Ali likens the current deadlock to a game of poker. “You keep your cards hidden, you don’t blink or flinch, and wait until the side breaks down,” he explained. “Everyone is maneuvering at this point, either showing up with a blank ballot or choosing a candidate who isn’t viable.”

Hezbollah deputy secretary general Naim Kassem said the group would not accept a candidate who opposes its stockpile of arms and supports what he alleged was “the American-Israeli project” in Lebanon.

In the opposing camp, Moawad has slammed Hezbollah and its allies’ for ruining ties with the Gulf and the wider international community, and at a discussion panel said would prefer paralysis over a new president affiliated to them.

“We’re seeing a repeat of the past where Hezbollah and allies gives Lebanon two choices: either accept their candidate or have a presidential vacuum,” said Charles Jabbour, a spokesman for the Lebanese Forces party, a Moawad ally.

There are also fears that a prolonged paralysis will further delay a possible IMF deal to recover its economy and renew investor confidence in the country.

The IMF has set conditions following a tentative agreement last April, including amending its banking secrecy law, restructuring its banks, and formalizing capital controls. Lebanon needs a president to ratify any laws that parliament passes.

In the meantime, Lebanon is set to have the second highest inflation rate worldwide in 2022.

“We are already on the verge of state collapse,” Bitar said. “If the paralysis lasts more than just a few weeks or months it could lead to a complete collapse.”