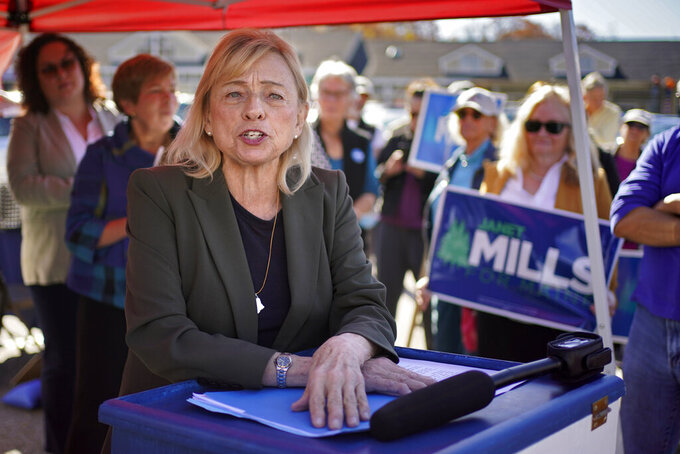 Democratic Gov. Janet Mills has turned back a challenge by Paul LePage, the bombastic former two-term Republican governor, to win a second term in Maine.

The first woman to serve as governor of the state, Mills had touted pragmatic leadership during the pandemic, including executive orders that LePage decried as a “reign of terror.” LePage also faulted Mills’ spending during the pandemic as he sought a third four-year term, which would have made him the longest-serving governor in state history.

“Tonight, you sent a clear message – a message that says we will continue to move forward, and we will not go back. We will continue to fight problems, and not one another,” Mills told the election-night crowd in downtown Portland.

LePage didn’t concede but acknowledged the math wasn’t adding up. He took an angry jab at the sitting governor during emotional remarks to his supporters in Lewiston, questioning her honesty and calling her an “elitist.”

It was a hard-fought battle with tens of millions of dollars in advertising by the candidates and dark-money groups.

The contest pitted a former attorney general from a family prominent in public service against a former businessman who was homeless as a boy and once compared himself to former Republican President Donald Trump.

LePage stormed to office in 2010, and later described himself as a prototype for Trump, in effect “Trump before Trump.” Democrats urged Mainers to reject the man who told the Portland NAACP to “kiss my butt,” compared the IRS to the Gestapo and said he’d tell then-President Barack Obama “to go to hell.”

She said she wanted to continue her efforts on health care after expanding the state’s Medicaid rolls, and on education after boosting funding. She vowed to work to grow the economy and to ensure women continue to have the legal right to an abortion.

She and LePage were no strangers.

They clashed when Mills’ tenure as attorney general overlapped with LePage’s time in the Blaine House, with Mills refusing to represent the governor’s office on some matters.

LePage’s penchant for controversy and for degrading opponents and the media overshadowed his conservative record of reducing welfare rolls, shrinking government, paying off hospital debt and reforming state pensions.

When LePage left office in 2019, prevented from seeking a third consecutive term by the Maine Constitution, he decamped for Florida, where he said he planned to take advantage of lower taxes. But he didn’t stay away for long, and soon returned to challenge Mills.

This time, LePage avoided public comparisons to Trump on the campaign trail, and tried to moderate his tone. He acknowledged that Democrat Joe Biden was legitimately elected, and surprised abortion opponents by saying he wanted to keep Maine’s law legalizing abortion on the books.

Mills extended an olive branch in victory, urging her supporters not to gloat.

“There are decent people of goodwill who are worried and who disagree about how to best solve the problems we are facing. We should not dismiss these concerns or the people who hold them. We must embrace them and work to find common ground,” she said.