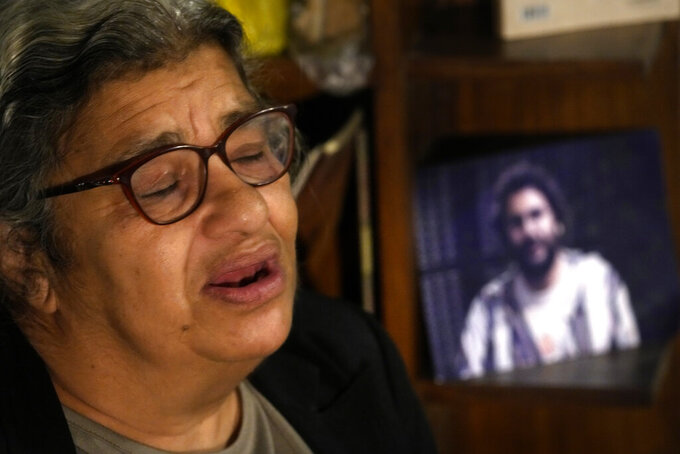 Amr Nabil, ASSOCIATED PRESS
Laila Soueif, mother of jailed pro-democracy activist Alaa Abdel-Fattah, who this week escalated a food and water strike demanding his release, speaks during an interview with the Associated Press in front of his picture at her home in Cairo, Egypt, Thursday, Nov. 10, 2022. Abdel-Fattah, who has been in prison for most of the past decade, is serving a five-year sentence on charges of disseminating false news for retweeting a report in 2019 that another prisoner died in custody. (AP Photo/Amr Nabil)

CAIRO (AP) — Egypt’s imprisoned hunger-striking activist Alaa Abdel-Fattah has started drinking water again, his family said Monday, in the first communication from the prominent dissident in over a week amid fears for his life.

The announcement came in a letter the family received from Abdel-Fattah through the prison authorities, dated on Saturday. Last Thursday, the authorities said they had “medically intervened” in Abdel-Fattah’s case, without providing details and raising concerns that he was being force-fed.

Abdel-Fattah’s Lawyer, Khaled Ali, was blocked three times from visiting him in prison since news of the medical intervention was announced, despite being granted permission from Egypt’s state prosecutor.

One of Egypt’s most prominent pro-democracy campaigners, Abdel-Fattah had intensified his hunger strike on Nov. 6, at the start of the U.N. climate conference, known as COP27, in the Egyptian Red Sea resort of Sharm el-Sheikh, to draw attention to his case and those of other political prisoners. He began a partial hunger strike in April limiting his intake of food to only 100 calories a day.

Then, he stopped taking food altogether and later stopped drinking water to coincide with the start of the summit. The announcement of the medical intervention last Thursday raised fears among the family that he could die in prison.

Laila Soueif, Abdel-Fattah's mother, told The Associated Press that the letter did not mention his hunger strike, but the family's assumption was it was ongoing.

Prison authorities had allowed Abdel-Fattah to communicate with his family through weekly letters. Monday’s letter is the first proof of life the family received since he began refusing water eight days ago.

Every day since he stopped drinking water, Soueif has been waiting outside the prison of Wadi el-Natroun, north of the Egyptian capital of Cairo, seeking proof of her son's life. On Monday, Ali, the lawyer, was also there, waiting to be allowed to see Abdel-Fattah.

Later Monday, an extract of Abdel-Fattah’s letter was posted on Facebook by a group lobbying for his release. In it, he confirms “he is drinking water" and “receiving medical attention," without revealing any other specifics.

On Twitter, one of Abdel-Fattah’s sisters, Sanaa Seif, confirmed the letter was in her brother’s handwriting.

Abdel-Fattah rose to prominence during the 2011 pro-democracy uprisings — known as the Arab Spring — that swept through the Middle East. In Egypt, the uprising toppled the country's long-time autocratic President Hosni Mubarak.

Abdel-Fattah has been imprisoned several times and spent a total of nine years behind bars, becoming a symbol of Egypt’s sliding back to an even more autocratic rule under el-Sissi.

Jake Sullivan, the U.S. national security adviser, told the AP that President Joe Biden raised Abdel-Fattah’s case during his meeting with el-Sissi on Friday at the climate summit. Sullivan could not provide any update on Abdel-Fattah’s condition.

At the summit, British Prime Minister Rishi Sunak, French President Emmanuel Macron and German Chancellor Olaf Scholz also raised the activist’s case in their talks with el-Sissi. Abdel-Fattah gained British citizenship earlier this year through his mother who was born in London.

At the climate summit, Egypt’s foreign minister, Sameh Shoukry, talked down the global attention surrounding Abdel-Fattah's well-being and said on Saturday that the priority of the conference should be focused on “the existential challenge related to climate change."

Also Saturday, Sanaa Seif, took part in a protest march in Sharm el Sheikh that saw hundreds of activists demand action on climate change, human and gender rights. The protesters have called for the release of Abdel-Fattah and all political prisoners detained in Egypt.

Meanwhile, the United Nations said it was investigating allegations of misconduct by Egyptian police at the summit, following claims that attendees were being photographed and filmed at an event at the German pavilion.

In a statement Sunday provided to the AP, the U.N. climate office confirmed that some Egyptian security officers were working in the part of the venue designated as United Nations territory.

Ahead of COP27, the Egyptian government sought to improve its international image, releasing dozens of high-profile detainees under presidential pardons in recent months and establishing a new “strategy” to upgrade the country's human rights conditions.

Amnesty International in September described the strategy as a “shiny cover-up” meant to gain favor with foreign governments and financial institutions.

Egypt is among the world’s worst jailers of journalists, along with Turkey and China, according to 2021 data produced by the U.S.-based Committee to Protect Journalists. Human Rights Watch estimated in 2019 that as many as 60,000 political prisoners are incarcerated in Egyptian prisons.

This story has been corrected to say that Abdel-Fattah's sister took part in a protest march by climate activists but did not lead it.