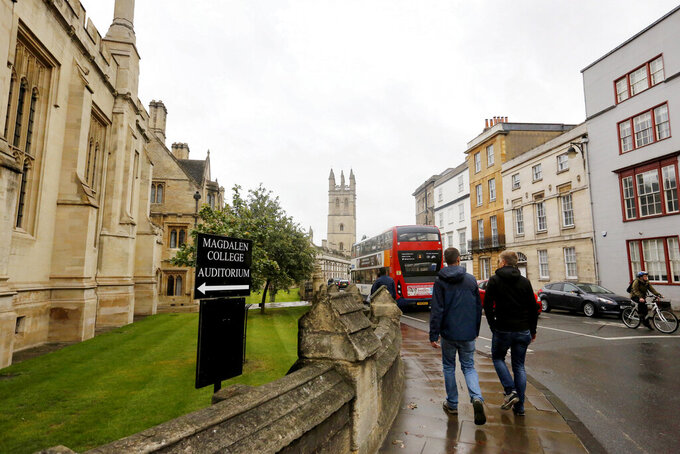 Caroline Spiezio, ASSOCIATED PRESS
FILE - People walk around Oxford University's campus in Oxford, England on Sept. 3, 2017. A new group of Rhodes Scholars from the U.S. has been selected for the prestigious academic program in a selection process that was conducted online for the third consecutive year, the Office of the American Secretary of the Rhodes Trust said in a statement early Sunday, Nov. 13, 2022. (AP Photo/Caroline Spiezio, File)

WASHINGTON (AP) — A new group of Rhodes scholars from the U.S. has been chosen for the prestigious academic program in a selection process that was conducted online for the third consecutive year.

The class of 32 scholars for 2023 was “elected entirely virtually, with both candidates and selectors participating remotely, safely, and independently,” American Secretary of the Rhodes Trust Elliot F. Gerson said in a statement Sunday. “As successful as the process was, we of course hope to return to in-person interviews and selection next year in cities across the country, as had been done for over a century.”

Interviews for the 2021 and 2022 scholarship classes were conducted virtually because of the COVID-19 pandemic.

The 2023 scholarship class, including 16 female and 16 male recipients, is expected to begin studies at the University of Oxford in England in October in pursuit of graduate degrees in social sciences, humanities and biological and physical sciences, the trust said.

Isabella Turilli, a 2022 graduate of Georgetown University who is one of the winners, will study public policy with her two-year scholarship. Turilli, a researcher at the Council on Foreign Relations, has been focusing on global health diplomacy, the university said.

“COVID-19 was able to fundamentally reorient my path — a year of struggle, service and much suffering has pushed me towards a career in global health policymaking,” Turilli said in a Georgetown University news release. “I see the Rhodes Scholarship as the vehicle through which I can work towards state cooperation in global health governance.”

Sophie Huttner, a Yale University senior majoring in global affairs who volunteers as a Spanish and Portuguese translator, plans to study refugee and forced migration studies at Oxford. A native of New Jersey, she attended Kent Place School before living with her parents in Sarasota, Florida, during the pandemic.

“I am especially interested in helping to shape future refugee policy to better protect those fleeing gender violence and climate disasters,” said Huttner, who serves as president of Yale Interpretation Network. She oversees 400 volunteers who “ensure that no one in Connecticut is turned down from services due to a language barrier.”

Atharv Gupta, a senior at Georgetown, will study the social science of the internet and social data science with his two-year scholarship.

“Oxford’s master of science in social science of the Internet is the perfect program to study how local economies are shaped by the Internet, both materially and at the human-level,” Gupta said. “Studying these subjects will help me bring a crucially overlooked perspective on digital technologies to the development sector.”

The U.S. scholars, who are among students selected from more than 60 countries, were vetted by 16 independent district committees from a pool of more than 2,500 applications. From those applicants, 840 were endorsed by 244 U.S. colleges and universities.

After receiving the endorsements of their schools, most of the district committees chose 14 or more applicants for online interviews. The committees met separately Nov. 10-12 through a virtual platform and promoted 235 finalists from 73 colleges and universities, including nine schools that have not previously had a student win the scholarship, although there were no first-time winning institutions, the trust said.

The scholars’ financial expenses for two to three years of study – averaging about $75,000 per year – are covered by the Rhodes Trust, a British charity established to fulfill the bequest of Cecil Rhodes, a founder of diamond mining and manufacturing company De Beers.

The scholarships were created in 1902, with the inaugural class entering Oxford in 1903 and the first U.S. Rhodes scholars arriving in 1904, according to the website of the trust’s American secretary.