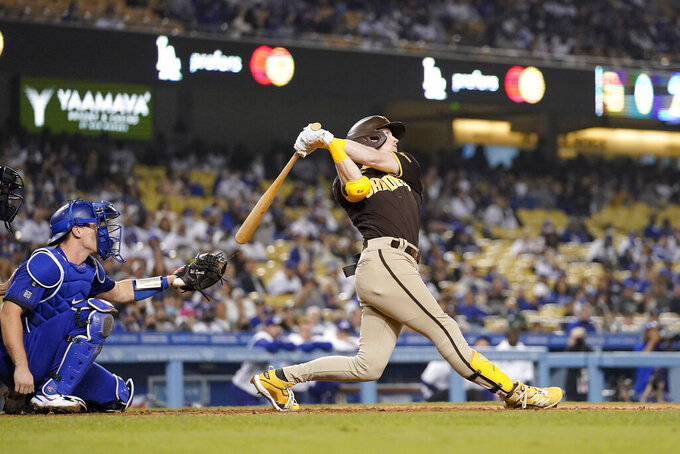 LOS ANGELES (AP) — The Los Angeles Dodgers need to win the week to catch NL West-leading San Francisco, and even that might not be enough.

The defending World Series champions opened their final homestand of the regular season with a 2-1 victory over the San Diego Padres on Tuesday night. The Giants beat Arizona 6-4, leaving the Dodgers two games back with five to play. Los Angeles needs to win out and hope the Giants lose three in order to claim a ninth straight NL West crown.

“We got to take care of our own business,” said Trea Turner, who had three hits and scored his 100th run of the season. “Close game, but all that matters is we won. It’s good to start the week with a win.”

“Those two numbers together are something I’m definitely proud of,” he said. “It’s a big thing for me as a starting pitcher to have a year like that.”

Buehler (15-4) allowed three hits in his career-high 32nd start of the season. He walked two to win for the first time since Sept. 11, also against the Padres.

After his ERA got lower in June, July and August, putting him in Cy Young Award contention, Buehler suddenly struggled in September. His ERA for the month reached to 7.32 and he gave up 26 hits and 16 earned runs.

“Just haven’t been as crisp and sometimes you have to simplify,” he said. “Just trying to get back to myself and I’ve felt closer to that tonight than I have in the last couple outings.”

Buehler came out aggressively against the Padres, who were mathematically eliminated from wild-card contention on Monday.

“To have Walker throw the baseball like he did makes it that much more exciting going forward,” Dodgers manager Dave Roberts said. “He was in command all night, in control of all quadrants. Everything he had tonight had teeth.”

Buehler gave up one walk through the first four innings. Eric Hosmer reached on an infield single to Buehler leading off the fifth for the Padres’ first hit. Hosmer didn’t last long on the basepaths, getting thrown out at second when Wil Myers hit into a double play to third.

Trailing 2-0, the Padres threatened in the ninth. Jake Cronenworth hit his 21st homer off Blake Treinen, who then walked Hosmer with two outs. Hosmer stole second to put the potential tying run on second. Pinch-hitter Tommy Pham took a called third strike to end the game. Treinen earned his seventh save.

The Padres didn't have a runner in scoring position until the sixth, when Victor Caratini poked a single into left and took second on Adam Frazier's walk. But Fernando Tatis Jr. grounded into an inning-ending double play.

Hosmer was San Diego's second runner to reach second base, doubling to left and narrowly avoiding the tag with two outs in the seventh. Turner made an over-the-shoulder catch like a wide receiver on Myers' fly to end the inning.

The Dodgers, wearing their all blue alternate uniforms, scored in the first on Turner's RBI double and the third on AJ Pollock's RBI single.

They had plenty of other chances to blow the game open, drawing nine walks and stranding 13 runners. They were 2 for 11 with runners in scoring position.

Fans heavily booed Tatis and former Dodger Manny Machado, who wore gold shoes. The two sluggers were a combined 0 for 8. Tatis struck out three times as the Padres lost their fourth in a row.

San Diego's Yu Darvish (8-11) gave up two runs and five hits in four innings, leaving after he reached 85 pitches. The right-hander struck out six and walked four in what was likely his final start of the season, although he wants one more outing after reaching 199 strikeouts for the season.

“I have one more to go to get to 200 strikeouts, so for me, yeah, I'd like to go in and pitch another game,” he said through a translator.

“He told me he was coming for me, which I had no doubt in my mind that he was going to be putting good at-bats together,” Turner said. “Seeing me and him up there is pretty cool.”

Buehler improved to 6-0 with 76 strikeouts in his career against the Padres. He was 4-0 with 42 strikeouts against them this season.

Dodgers: 1B Albert Pujols went on the COVID-19 IL after not feeling well as the result of his second vaccination. ... OF Cody Bellinger was activated from the IL after missing eight games with a broken left rib.