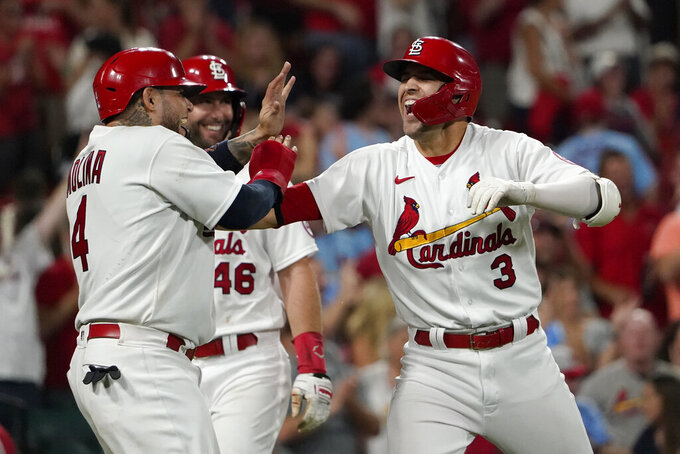 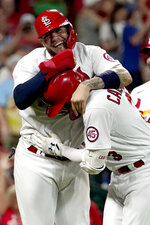 It was the Cardinals' sixth win in a row and extended their lead for the second wild card spot to 1 1/2 games over San Diego. The Cincinnati Reds beat the Los Angeles Dodgers 3-1 and remain one game back of St. Louis.

Mikolas joked with reporters after the game about not having a win in a while.

“Has it been that long” Mikolas asked. “ I don't really ever put my head too far in the past. I'm going out trying to win every game. I had a couple of wins in the minor leagues (and) that was nice. It does feel good. First I haven't pitched in like two years, now I finally get a win after two years so who knows what I'll do next.”

Carlson was not just happy to be able to contribute but he recognized the importance of beating the Padres who are chasing them .

“I mean just coming through for the team is something I'm really proud of," Carlson said. “Yeah, it's huge. Obviously we're just focusing on our series here, doing all we can to win it. That's a really good team over there."

Mikolas (1-2) threw 5 2/3 shutout innings, allowing three hits, walking two and striking out three. He last won on Sept. 12, 2019. Mikolas missed all last season with an injured right shoulder, and he missed a considerable part of this season with right forearm tightness.

The Cardinals jumped all over Padres emergency starter Vince Velasquez in the first inning. Velasquez signed with San Diego Wednesday after the Padres placed Blake Snell on the Injured List with a left abductor groin strain.

“Not starting in about a week and a half I think I did a pretty good job of filling up the strike zone,” Velasquez said. “A couple of misses here and there kind of hurt me but I definitely made the adjustments once I settled in.”

Tommy Edman led off with a double and scored on Paul Goldschmidt’s single. O’Neill then homered into the Padres bullpen giving the Cardinals an early 3-0 lead.

“You know anytime you're playing the game, you want to get those first runs scored and get on the board,” O'Neill said. “Anytime you start 3-0, it's a good sign.”

Carlson made it 4-0 with a solo homer in the fourth and then hit his second career grand slam in the eighth off reliever Ross Detwiler. Carlson is the first Cardinals rookie to hit multiple grand slams in a season.

The Padres scored twice in the seventh. After the Padres loaded the bases with one out, Tommy Pham scored on pinch-hitter Jake Cronenworth’s sacrifice fly and Eric Hosmer came home on Jurickson Profar’s RBI single.

“I thought Miles was pretty good early,” Tingler said. “I thought we had some big at-bats. We just didn't have enough...but still some positives to build on.”

Pham returned to Busch Stadium for the first time July 29, 2018. Pham played three and a half seasons with the Cardinals before being traded to Tampa Bay.

Cardinals 3B Nolan Arenado remains one RBI shy of 100 for the season. Arenado’s next RBI gives him six seasons of 30+ home runs and 100+ RBIs.

Cardinals: RHP Dakota Hudson (right elbow) made his final injury rehab appearance tonight with Triple-A Memphis. The Cardinals will decide whether to recall him for the last two weeks of the season.

Yu Darvish (8-10, 4.32 ERA) pitches for San Diego and Adam Wainwright (16-7 2.88 ERA) throws for St. Louis as the Padres and Cardinals play the second game their three-games series Saturday. Darvish has won only one of his last 12 starts since June 27th. Wainwright is 6-0 with a 1.71 ERA in his career against San Diego at Busch Stadium.