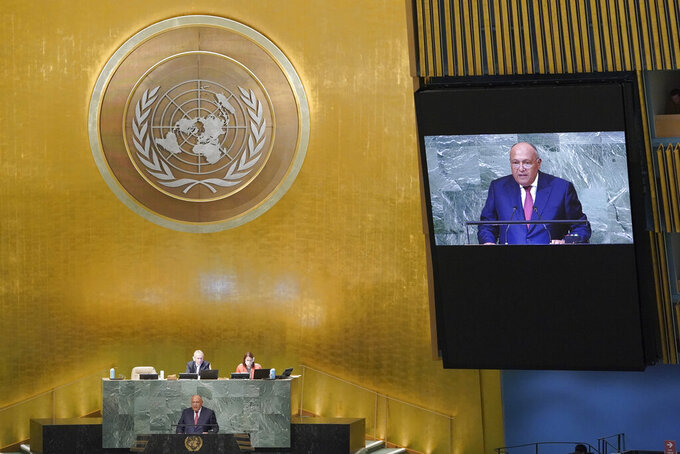 UNITED NATIONS (AP) — The Latest on the U.N. General Assembly:

Saudi Arabia’s foreign minister said Saturday that the world needs more fossil fuel investments, a message at odds with the United Nations' own panel of scientists and researchers.

“We need to invest in fossil fuels in order to meet growing international needs and meet the needs of consumers and producers to avoid the negative consequences of unrealistic policies aimed an excluding the main source of energy,” Foreign Minister Prince Faisal bin Farhan said at the U.N. General Assembly.

The U.N. panel says there should not be new investments in fossil fuel infrastructure and that the fuels, which are mostly responsible for climate change, must phase out over time.

The kingdom has committed to carbon neutrality by 2060, but insists that the energy transitions must be gradual.

Like other Arab states, he reiterated Saudi Arabia’s support for a two-state solution between Palestinians and Israelis. He also called for reform of the U.N. Security Council to better “address common challenges."

He said the “external and internal challenges we face provide an opportunity for implementing political, social and economic reform that will lead to recovery and prosperity for our people.”

Sabri was a member of former president Gotabaya Rajapaksa’s Cabinet, serving as a justice and then finance minister. Rajapaksa fled the country in July amid a raging economic crisis and popular anger. He was replaced by his prime minister, Ranil Wickremesinghe.

Echoing other developing countries, Egypt’s top diplomat on Saturday implored countries to reform the United Nations, lamented double standards in how the world’s powerful nations deal with crises and expressed concern about growing national debt incurred during the pandemic.

Speaking at the annual U.N. Generally Assembly, Foreign Minister Sameh Shoukry also talked about Africa’s food crisis, saying one in every five people on the continent are at risk of hunger.

The pandemic along with the effects of climate change and Russia’s invasion of Ukraine have impacted the cost and availability of grain. Egypt is the world’s biggest importer of wheat and had to take out loans to purchase wheat to feed the country’s poor.

Shoukry additionally urged support for poorer countries facing the ravages of climate change. “They are the most deserving of such support,” he said.

Egypt is host and president of the upcoming U.N. climate change conference, known as COP 27.

Egypt, which has a population of over 103 million people, is also facing a potential water crisis from Ethiopia’s controversial mega-dam that is being built on the Blue Nile. Shoukry said that while Egypt recognizes Ethiopia’s rights to development, Egypt will not let go of its right to the water of the Nile River, which he said has always been a part of the nation’s history.

Bangladeshi Prime Minister Sheikh Hasina on Friday said she wanted an immediate end to the war in Ukraine, as well as the related sanctions, for the sake of lives and livelihoods of the people across the world.

“Due to sanctions, and counter-sanctions, not a single country, rather the entire mankind, including women and children, is punished,” Hasina told the 77th session of the United Nations General Assembly, pointing to her own country's high inflation.

Hasina also noted the fifth anniversary of the mass exodus of Rohingya refugees to Bangladesh, which has sheltered more than 1 million of them from neighboring Myanmar. Hasina said the world should work to repatriate them to Myanmar.

“Not a single Rohingya was repatriated to their ancestral home Myanmar, despite our bilateral engagements with Myanmar, discussions with partners in trilateral format and engagements with the U.N. and other partners to assist Myanmar to create necessary conditions for safe and dignified repatriation,” she said.

Hasina called climate change one of the biggest threats to humankind and demanded that the world community promote inclusive action to fight it.

“In the past, we have seen a vicious cycle of promises being made and broken," she said. “We must now change this course.”