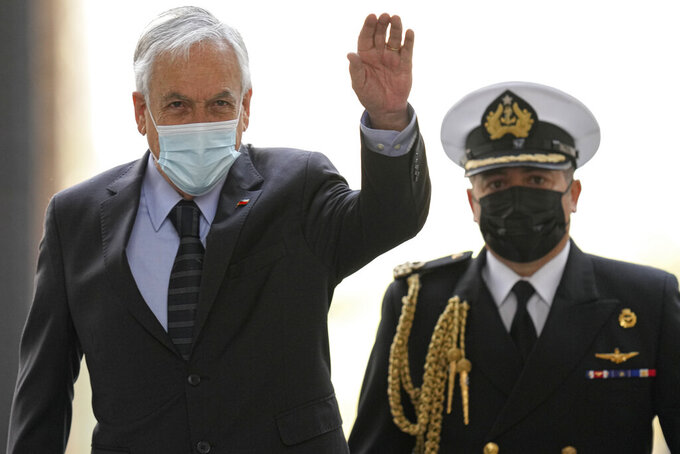 SANTIAGO, Chile (AP) — The Chilean Senate late Tuesday rejected an opposition-initiated impeachment process to remove President Sebastián Piñera over allegations that he favored the sale of a family property that hinged on the government not declaring the land a nature reserve.

The lower house approved the impeachment charges, setting up a trial in the 43-member Senate, where senators voted 24 in favor of removal, 18 against and one abstention. The total in favor was five votes short of the two-thirds support of 29 senators needed to oust the president.

On a second charge accusing Piñera of compromising the nation's honor, the vote was 22 in favor of removal, 20 against and one abstaining.

"He values the decision that the Senate has taken,” Ossa said.

The vote came less than a week before the first round of Chile's election to choose a successor for Piñera, whose term ends March 11. Chile does not allow presidential reelection to consecutive terms.

Right-leaning Sen. Luz Ebensperger was one who voted against ousting the president. She said it was not enough just to accuse Piñera of something, saying she didn't see anything “to prove it.”

The accusations against the president arose from publication of the so-called Pandora Papers, which revealed offshore financial dealings of prominent figures around the world, including Piñera, one of Chile’s wealthiest people.

The leaked documents revealed that one of Piñera’s sons used offshore companies in the British Virgin Islands for the sale of the Dominga mining project, which his family co-owned.

The final payment on the mine’s sale in 2011 hinged on the government declining to declare its location in north-central Chile a nature preserve. The government, by that time headed by Piñera in his first time as president, didn't make the designation, which had been sought by environmentalists. The next government also withheld the designation.

When investigators looked into the case a few years later, Piñera said he had not been involved in managing the companies and had not even realized the family's connection with Dominga.

The president’s office noted that Piñera’s first term as president, from 2010 to 2014, hadn’t started when the sale was agreed to, that prosecutors and courts decided in 2017 that no crime was committed and that Piñera had not been involved. It said all taxes due in Chile were paid.

Piñera’s holdings are now managed in a blind trust, according to the statement.