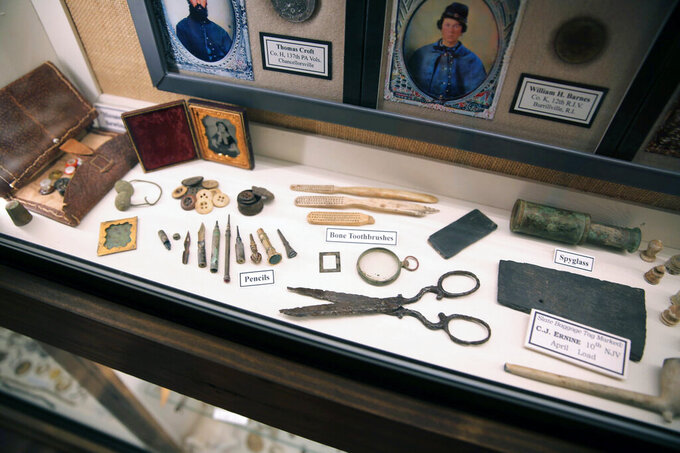 James Baron, ASSOCIATED PRESS
Some of the relics on display at The Winery at Bull Run include combs and scissors used by U.S. troops during their occupation of Stafford in the early 1860s in Fredericksburg, Va. D.P. Newton’s extensive collection of Civil War artifacts that once filled his southern Stafford County museum is now on permanent display in Centreville at a business that touches the east side of the Manassas National Battlefield Park. (James Baron/The Free Lance-Star via AP)

CENTREVILLE, Va. (AP) — D.P. Newton’s extensive collection of Civil War artifacts that once filled his southern Stafford County museum is now on permanent display in Centreville at a business that touches the east side of the Manassas National Battlefield Park.

“It went back to holy ground,” said Newton’s wife Bonny, who began looking over D.P.’s massive collection of Civil War relics after he died at age 66 just over three years ago.

Opened in 1998, Newton’s White Oak Civil War Museum held thousands of Minié balls, belt buckles, buttons, bayonets, caps and other military items left behind in Stafford by U.S. troops during their occupation during the winter of 1862–1863. Newton and his father began gathering the wartime relics beginning in the 1950s when the largely undeveloped area was still ripe for picking.

The bulk of D.P.’s huge collection is now under the care of Jon Hickox, himself a lifelong relic hunter, who is also president and owner of The Winery at Bull Run in Centreville.

Hickox created his own museum in the lower level of his winery to permanently house Newton’s collection. Hickox said he spent close to $250,000 to properly build out the museum to display Newton’s vast collection.

Hickox called Bonny Newton “a fighter” who recruited the help of former state delegate Bill Howell to help her find the right home for the collection.

“(Bonny) worked tirelessly to find somebody to put it together for no financial benefit to her whatsoever,” Hickox said. “She could have sold everything and taken the money. If it wasn’t for Bonny’s determination, D.P.’s collection probably would have disappeared.”

The story of how Hickox came to know Newton’s collection began about 30 years ago, when Hickox took up metal detecting, which quickly became his obsession. By the mid-1990s, Hickox was not only an expert with a metal detector, he was also repairing the devices for other like-minded relic hunters who frequented Centerville Electronics.

“I was in the middle of that universe,” Hickox said. “I had heard about Fredericksburg, I heard about White Oak, everything else.”

By the mid-1990s, Hickox’s father sold the family home in Burke and bought a new house in Westmoreland County. It was during frequent road trips south to visit his father that Hickox would venture out of his way to visit Newton at the White Oak museum.

“He probably knew me as the tall kid that came in and asked a lot of questions,” Hickox said. “I definitely wasn’t as close to him as many others, but I would go to that museum all the time.”

In addition to military memorabilia mostly made out of iron, copper, lead or brass, Newton had also filled his former museum at 985 White Oak Road with heaps of documents, photographs, maps, letters and diary entries by Civil War soldiers and 1860s-era residents of White Oak. Bonny Newton embarked on a mission to find a suitable caretaker for all that material and to help prepare for the inevitable move out of the museum. She spent months there mostly by herself, carefully inventorying and placing the entire collection into tupperware containers in preparation for the move.

“The only help I had was D.P.’s cousin and he would come after work and help me take the heavy glass out, or lift something I couldn’t lift,” Bonny said.

During the packing process, Bonny took time out to attend a relic show seeking advice on how to best proceed with D.P.’s prized collection. While there, Bonny spoke to an acquaintance of D.P.’s—civil war author Juanita Leisch—who introduced her to a man who was exhibiting at the show who gave Bonny the contact information for Hickox as someone who might be interested in displaying D.P.’s collection permanently.

About two weeks after Bonny returned from the relic show, she reached out to Hickox who told her he had a 501(copyright)(3) nonprofit that he was already donating all of his own Civil War artifacts to, and he was also willing to put the collection on permanent display at his business.

“I believe that’s why she wanted me to have the collection because there are very few places that could check all those boxes,” Hickox said.

Hickox called the entire process “an incredible collaborative effort” by a large group of people who were all motivated by the will of Bonny and her late husband.

“We were all led by the inspiration of a man so many of us loved and admired, and inspired by a woman’s love for her husband, determined to help protect this man’s life’s work and legacy,” Hickox said.

Bonny proposed Hickox sign an agreement to keep D.P.’s collection intact for the next 20 years, even though some of her peers warned Hickox might shy away from such a proposal.

Bonny said because Hickox was already a skilled relic hunter and professional collector, she was confident he understood the amount of work her husband put into his collection. She said she’s relieved the collection is in the capable hands of a man with similar interests and qualities as her own husband.

“They’re cut from kind of the same cloth,” Bonny said. “I never thought I’d find anyone like Jon.”

Although Hickox now holds the bulk of D.P.’s original collection, he said Bonny donated most of D.P.’s maps, research and other documents to the Virginia Museum of History & Culture in Richmond, which received 5% to 10% of his collection.

“The balance was donated to the Civil War Museum at the Winery at Bull Run for us to put on display,” Hickox said. “That’s how that collection ended up here.”

Hickox said the process to build out his museum began about three years ago when restaurants, wineries and other establishments were shut down during the coronavirus pandemic. Hickox said he used that time to convert what used to be a storage space in the lower level of his winery to a museum.

Although the artifacts are creatively displayed in custom display cases with descriptions for each item, one display case serves as a tribute to D.P. Newton and includes photographs, personal memorabilia such as D.P.’s original Fischer M-Scope metal detector he used while hunting relics in Stafford and the eulogy Bonny delivered at D.P.’s funeral.

“We call it our D.P. shrine,” Hickox said. “(Bonny) wrote this wonderful eulogy and I thought it was important to tell D.P.’s story.”

There’s also a 3-minute video that includes a short interview with Newton in which he tells a story of Civil War history and the art of relic hunting.

“There is a D.P. aspect of the visitation,” Hickox said. “There’s no substitute for the real thing, but they do get a piece of that.”

Although the museum is smaller in size than the former White Oak schoolhouse Newton used as a museum, Bonny said Hickox made creative use of space at the Centreville site. For example, he arranged bayonets on the ceiling of the museum, all pointed in a way to route guests through the exhibits.

Even as visitors prepare to exit the museum, a familiar sight from the White Oak museum gives them one last taste of Newton’s handiwork and what he discovered in Civil War camps in Stafford.

One of D.P.’s in-ground troop huts that U.S. troops lived in as they wintered in Stafford has been carefully erected inside the museum by Hickox and his team, complete with relics.

“For the average visitor, they’re really excited,” Hickox said. “They get to see more of what that life looked like, and D.P.’s. collection certainly adds to that visitation and experience.”

Hickox said to view D.P.’s collection, individuals can sign up for the “Witness to History” tour at his winery that includes wine and a tour of the museum and other historic sites nearby. Groups can also tour D.P.’s collection privately if reservations are made at least one week in advance. Hickox said there is no fee for group tours arranged in advance.

“I’m personally sad (the collection) left Stafford, and I’m sad to see D.P. leave this earth,” Hickox said. “It’s not the same without him.”