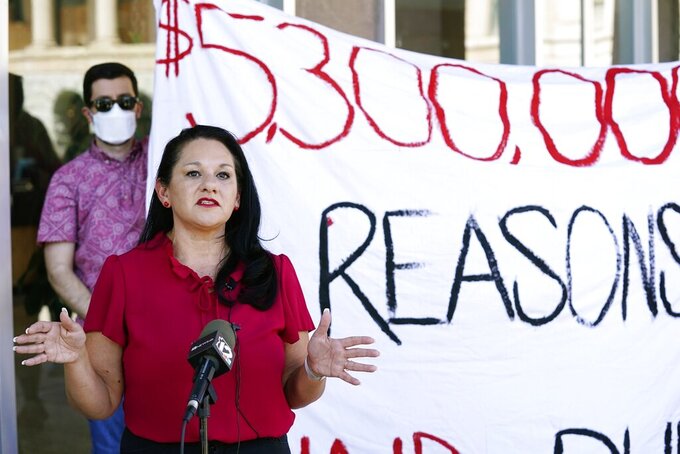 Ross D. Franklin, ASSOCIATED PRESS
Marisol Garcia, Vice President of the Arizona Education Association, speaks during a news conference at the Arizona capitol Tuesday, June 21, 2022, in Phoenix. The Arizona Legislature on Tuesday began considering a $15.6 billion state budget package that pays down more than $1.2 billion in state debt but keeps in place most of a nearly $800 budget gimmick from the Great Recession, boosts road construction, border security and other spending but falls short of what education advocates say is needed to fund K-12 public schools. (AP Photo/Ross D. Franklin)

The measure comes just four years after voters overwhelmingly rejected a smaller voucher expansion after an unprecedented mobilization by teachers opposed to using tax dollars for private education. The new bill still needs approval in the Senate, which backed a smaller expansion in February.

Democrats fiercely opposed the bill, saying there is no testing or other mechanism to make sure children are actually learning.

Currently about 255,000 public school students qualify for the Empowerment Scholarship Account program, although fewer than 12,000 take them.

In addition to all current public school students, about 59,000 current private school students would be newly eligible under the new plan championed by House Majority Leader Ben Toma.

Many private school students currently get state funding though a separate tax credit program, but over time many would opt for the new funding because the $7,000 average voucher exceeds the average tax credit by more than $2,500 a year, the Legislature's budget analysts said in an evaluation of the costs. Homeschooled students would also be eligible.

“I really do wonder often why should private schools be the exclusive domain of the wealthy,” Toma said. “Why shouldn’t every child in Arizona have that same opportunity?”

Parents are the ultimate accountability, he said, and would remove their children from a school that's failing to educate them.

Mesa Republican Rep. Michelle Udall was among a few House Republicans who blocked a voucher expansion last year and was opposed to an earlier version this year because it lacked testing or other accountability. She said last week that she wanted much more K-12 spending to win her support, but a separate new funding bill adding about $400 million in spending did not move Wednesday.

Udall still voted for the voucher expansion. She didn't immediately respond to requests for comment.

The Legislature’s budget analysts said the voucher expansion would cost the state $125 million a year by 2025, and grow each year thereafter. The Legislature is not adding extra funding for that cost.

Meanwhile, Republican legislative leaders will need to drastically trim the nearly $18 billion state budget deal they hammered out with GOP Gov. Doug Ducey or persuade some Democrats to vote for the proposal if they are to get it enacted.

With just one-vote majorities in the House and Senate, GOP leaders need every Republican vote, and they aren't there. Some Democrats were working to get changes they needed to get on board.

Still, the budget plan was moving on Wednesday, with the Senate Appropriations Committee approving the spending package after a delay the day before triggered by a disagreement with the House. The House, meanwhile, planned to debate and vote on the full plan late Wednesday even as a path through the Senate remained uncertain.

The budget's overall spending is Republican Sen. Michelle Ugenti-Rita's concern. The Scottsdale lawmaker called the spending plan “unsustainable and bloated” and noted that $2.3 billion in spending is outside the normal budget process and unprecedented.

“That's straight up manipulation and abuse,” she said.

She wants some of the state's $5.3 billion cash surplus used to provide “meaningful tax relief,” potentially a cut in the state gasoline tax.

She noted President Joe Biden on Wednesday proposed a temporary suspension of the federal gas tax and urged states to do the same.

Democratic Sen. Sean Bowie, who has said all session that he could back a Republican budget, said during the morning hearing that he’s close to being able to back the plan, but it will need some specific changes.

They include equalizing levels of new funding for all three state universities. Under the current plan. the University of Arizona is getting more new cash.

Bowie also wants an increase in the state’s private school tax credit program eliminated, more school funding and for the Legislature to waive a spending cap for K-12 schools and community colleges for the coming year.

“I honestly do feel like we’re close,” the Phoenix lawmaker said. “I’d like a little bit more – I think that gets us a long way towards a bipartisan budget."