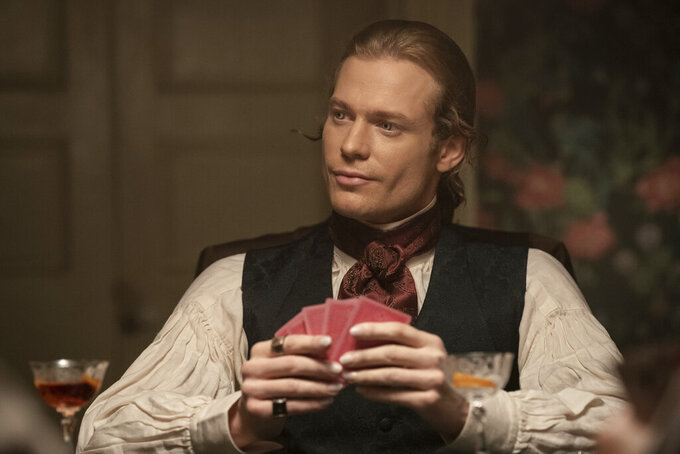 Alfonso Bresciani, ASSOCIATED PRESS
This image released by AMC shows Sam Reid as Lestat De Lioncourt in a scene from the series "Interview with a Vampire." (Alfonso Bresciani/AMC via AP)

LOS ANGELES (AP) — What’s fall got to do with the fall TV season? Summer had yet to roll up its Labor Day beach blanket when two major series, “The Lord of the Rings: The Rings of Power” and “House of the Dragon” arrived.

While the broadcast pattern of a strict September-to-May season has been undermined by streaming and cable efforts to keep audiences in thrall year-round, there remains a certain industry loyalty to tradition — and the expectation that people watch more TV when days grow shorter and colder.

That means viewers still have new shows to sample and favorites to rediscover, including some that have been gone too long. (OK, “The Crown” is worth the two-year wait.). To help sort through the clutter, here’s a curated list of series that have proven their entertainment value or show promise.

Season five tackles the British royal family’s Roaring ’90s, when Prince Charles and Princess Diana’s ill-fated marriage boiled over into bitter public recriminations. The real-life reign of Queen Elizabeth II ended with her death at age 96 in September, but her character (newcomer Imelda Staunton) remains the drama’s steady center. Respect also is due to the power behind the TV throne, “The Crown” creator Peter Morgan, who compellingly weaves together history (with some storytelling adjustments) and the imagined nuances of life behind palace doors. Helen Mirren, who won a best actress Oscar for 2006's “The Queen,” written by Morgan, calls him a fearless writer with a “real sense of the importance of research holding the whole thing up.” Debuts Nov. 9 on Netflix.

“INTERVIEW WITH THE VAMPIRE”

Vampires are having their moment in the sun — apologies, moon. Joining “Vampire Academy” and “What We Do in the Shadows” is the O.G. of modern blood-sucker dramas, “Interview with the Vampire.” Based on the Anne Rice novel adapted for the Tom Cruise-Brad Pitt hit 1994 movie, the series stars Jacob Anderson and Sam Reid as Louis and Lestat and Bailey Bass as their teen protege, Claudia. Eric Bogosian plays the title’s interviewer, intent on drawing out Louis’ centuries-long history. Rather than a horror story, creator-producer Rolin Jones says he sees it as a gothic romance, a “very excitable, aggressive, toxic, beautiful love story” that includes “queer sexuality” and aesthetics. It's already renewed for season two. Debuts Oct. 2 on AMC and AMC+.

The journalism maxim of “names make news” can be applied to TV shows generally and “Alaska Daily” in particular. It stars two-time Oscar winner Hilary Swank (“Boys Don’t Cry,” “Million Dollar Baby”) and was created by another Oscar winner: Tom McCarthy, co-writer of the fact-based journalism movie “Spotlight.” In “Alaska Daily,” Swank’s New York investigative reporter moves to Anchorage to rebuild a shredded reputation and finds stories that demand coverage, including the ongoing crisis of missing and murdered Indigenous women. McCarthy says the Alaska setting was partly inspired by reporting on the issue and it would be “almost negligent” to overlook it. Debuts Oct. 6 on ABC.

Adapting an autobiography for the screen is a delicate task, but “From Scratch” was in good hands. Actor Tembi Locke (“Never Have I Ever,” “Eureka”), the author of “From Scratch: A Memoir of Love, Sicily and Finding Home,” created and produced the series with her sister Attica Locke, a producer on “Little Fires Everywhere.” The pair decided that Tembi Locke’s story of her marriage to an Italian man, over his mother’s resistance to the American interloper, and its aftermath would benefit from fictionalizing the characters. “Having that bit of distance gave us great latitude to play,” Tembi Locke says. Zoe Saldana stars opposite Eugenio Mastrandrea. Debuts Oct. 21 on Netflix.

Who doesn't love a good origin story, especially one set in the “Star Wars” galaxy? “Andor,” which tells the backstory of future rebel hero Cassian Andor, will “walk you right into ‘Rogue One’” in 24 episodes, said series creator-executive producer Tony Gilroy, who was the 2016 movie's co-writer. The first dozen episodes that comprise season one will cover a pivotal year for Cassian, with season two bridging the remaining four years to connect to the film. Diego Luna reprises his big-screen role and says he intends to “challenge everything you think about Cassian.” Streaming now on Disney+.

Sherman McDaniels is the fictitious host of the long-running (also fictitious) musical variety series in the mode of “Soul Train” and “Solid Gold.” In reality, “Sherman's Showcase” is a sketch show that gives creators, executive producers and stars Bashir Salahuddin and Diallo Riddle free reign to satirize any and everything, from funk (music that involves “way too many people”) to fashion to celebrities, including series co-executive producer John Legend; supermodel Iman as played by Issa Rae, and the questionably over-confident Sherman himself (Salahuddin). For those who loved Morris Day in “Purple Rain,” Riddle says his guest appearance is a season two highlight. Debuts Oct. 26 on IFC.

Alicia Rancilio in New York contributed to this report.