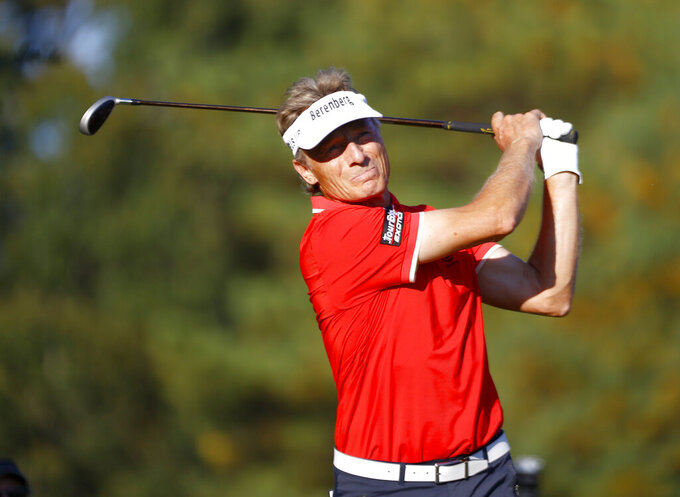 Notes: The final event of the two-year season is for the top 36 in the Charles Schwab Cup standings. ... Bernhard Langer is the No. 1 seed as he goes for a sixth Schwab Cup title. Langer recently won his 42nd career PGA Tour Champions title at age 64. ... Only four players have a mathematical shot at winning the Schwab Cup: Langer, Jim Furyk, Miguel Angel Jimenez and Ernie Els. ... Steven Alker was the only one to play his way into the season finale by winning the TimberTech Championship. ... Alker had no status when he turned 50 in late July. He qualified for the Boeing Classic in August and had top-10 finishes every week to keep playing to become eligible for the postseason. ... Kevin Sutherland injured his knee last week and said he was hopeful of being able to defend his title at Phoenix Country Club. ... Phil Mickelson is in the field. He has won three of the five times he has played on the PGA Tour Champions, including last month at the Constellation Furyk & Friends Invitational. ... Furyk has been runner-up the last two years at the TimberTech Championship.

Next tournament: End of season.

Notes: The field does not have anyone from the top 10 in the world ranking. ... Lee Westwood is playing for the first time since the Ryder Cup. He is outside the top 100 in the Race to Dubai and will not be eligible for the season-ending event on the European Tour. ... Brooks Koepka is playing, and his younger brother, Chase Koepka, received a sponsor exemption. ... Carlos Ortiz is coming off a runner-up finish in Mayakoba as he tries to defend a title for the first time on the PGA Tour. ... The last two Masters champions, Hideki Matsuyama and Dustin Johnson, tied for second in Houston last year. Neither is playing this year. ... The tournament has a different title sponsor for the second straight year. ... Patrick Reed is playing for the fifth time in the last six weeks. ... The highest-ranked player in the field is Tony Finau at No. 12. ... Viktor Hovland of Norway now has three PGA Tour victories, all at beach resorts — two at Mayakoba, one in Puerto Rico. He is not playing this week.

Notes: This is the final event for the top 60 in the Race to the CME Globe to qualify for the season-ending CME Group Tour Championship next week in Naples, Florida. ... Jin Young Ko took over the lead based on four victories in her last seven starts on the LPGA Tour. Nelly Korda is the only player who has a mathematical chance to move past her this week. ... Korda moved back to No. 1 in the world over Ko. ... Lydia Ko decided at the last minute to enter the tournament because it's the only way for her to play 70 rounds this year and qualify for the Vare Trophy for the lowest scoring average. The top three players in scoring will not be eligible. ... Korda has played only two tournaments since the Solheim Cup two months ago, the Cognizant Founders Cup and the Saudi-funded Ladies European Tour event in New York ... Emma Talley is holding down the 60th spot on the Race to CME Globe standings. ... The tournament is in its second year. Sei Young Kim won the inaugural event by three shots over Ally McDonald.

Notes: The new event gives the European Tour consecutive events in Dubai to end the season, with the DP World Tour Championship next week. ... The field includes Scottish Open champion Min Woo Lee (No. 6 in the Race to Dubai) and Paul Casey (No. 7). ... Two players in the field are coming off victories last week. Thomas Pieters won the Portugal Masters while Dean Burmester won the PGA Championship in South Africa on the Sunshine Tour. .... Thomas Detry is in the field after tying for 22nd last week in Mayakoba on the PGA Tour. ... Tommy Fleetwood is 13th in the Race to Dubai and in the field this week. He has not won since Nedbank Challenge in South Africa two years ago, a stretch of 44 starts worldwide. Fleetwood was No. 10 in the world when he won Nedbank. He now is on the verge of falling out of the top 40. ... The European Tour will have as many official events in Dubai this year as in Scotland (three each).