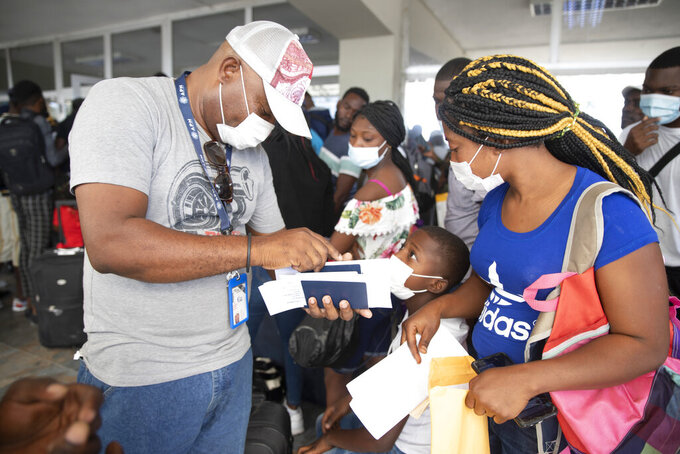 Odelyn Joseph, ASSOCIATED PRESS
Etienne Ilienses checks her family's papers for a flight to Chile, at the Toussaint Louverture International Airport, in Port-au-Prince, Haiti, Sunday, Jan. 30, 2022. Ilienses said she was sent back to Haiti from Texas on Dec. 14 and talked to the AP before flying to Santiago with her three children on a Jan. 30 charter flight on SKY. “To get to the USA, I braved hell,” she said. Still, she did not dismiss doing it again “because Haiti offers nothing to its children. We are forced to suffer humiliations, affronts everywhere." (AP Photo/Odelyn Joseph)

But they are not targeting tourists.

Instead, they are touts for a thriving, little-known shadow industry that is profiting from the U.S. government sending people back to Haiti, a country besieged by gang violence.

More than a dozen South American travel agencies have rented planes from low-budget Latin American airlines -- some of them as large as 238-seat Airbuses -- and then sold tickets at premium prices. Many of the customers are Haitians who had been living in Chile and Brazil before they made their way to the Texas border in September, only to be expelled by the Biden administration and prevented from seeking asylum. They are using the charter flights to flee Haiti again and return to South America.

Some, clearly, plan to make another try to enter the United States.

Rodolfo Noriega of the National Coordinator of Immigrants in Chile said Haitians are being exploited by businesses taking advantage of their desperation. They “are at the end of a chain of powerful businesses making money from this circuit of Haitian migration,” he said.

The airlines and travel agencies say they work within the legal norms of the countries where they are operating from and are simply providing a service to the Haitian diaspora in South America.

The thriving business model was revealed in an eight-month investigation by The Associated Press in partnership with the University of California, Berkeley’s Human Rights Center and its Investigative Reporting Program.

This story is part of an ongoing Associated Press series, “Migration Inc,” that investigates individuals and companies that profit from the movement of people who flee violence and civil strife in their homelands.

Haitians sick of the deprivations of their island home resettled in Chile or Brazil, many after Haiti’s catastrophic 2010 earthquake. Then, last fall, struggling as the pandemic hit local economies and beset by racism, thousands decided to make their way to the Texas border town of Del Rio. There, they ran afoul of a public health order, invoked by the Trump administration and continued under the Biden administration, that blocks migrants from requesting asylum.

Authorities returned them not to South America, where some of their children were born, but to their original homeland -- Haiti.

Some interviewed by the AP said they feared for their lives there and wanted to return to South America. But airlines had stopped direct commercial flights from Haiti to Chile and Brazil during the pandemic; their remaining option was the charters.

The charter flights from Haiti became a lucrative business as restrictions aimed at controlling the spread of the coronavirus decimated tourism, according to the travel agents. Planes arrive empty to Haiti but return to South America full.

From November 2020 until this May, at least 128 charters were rented by travel agencies in Chile and Brazil for flights from Haiti, according to flight tracking information, online advertisements matching the flights to agencies and other independent verification by the AP and Berkeley.

The Brazillian and Chilean travel agencies said in interviews that they pay anywhere from $100,000 to $200,000 to rent an aircraft. At that rate, the three airlines that rented planes for 128 charter flights between Haiti and either Brazil or Chile would have been paid a total of anywhere from $12 million to $25 million. Meanwhile, prices for one-way tickets from Haiti to Chile have more than doubled in eight months, from $625 to more than $1,600.

Since taking office in January of 2021, the Biden administration sent back more than 25,000 Haitians to Haiti despite warnings from human rights groups that the expulsions would only contribute to Haiti’s travails and feed more Haitian migration to Latin America and the U.S.

Not all of the passengers on the charters had tried to immigrate to the U.S., but based on interviews with dozens of travel agents, Haitian migrants and advocates, and an analysis of flight data using the Swedish service Flightradar24, it is clear that the charters have become a major means to flee Haiti.

Some who took charter flights back to South America have headed north again on the network of underground routes that wind through Central America and Mexico and that ultimately lead to the United States, according to immigration attorneys, advocates and interviews with dozens of Haitians.

Many of the Haitians go back to Chile and Brazil, rather than places close to the U.S. like Mexico, because they have visas and other legal paperwork to get into those countries. And having lived there, they can find jobs quickly to make money for the trip north.

Some, like Amstrong Jean-Baptiste, also have children who were born in South America.

The 33-year-old father of two, spent $6,000 on a harrowing trip from Chile to Texas, only to be sent back to Haiti.

He had knives pulled on him, forged rivers that carried others away to their deaths and encountered highway robbers. In the end, he said the Haitians were handcuffed and “treated like animals” by U.S. immigration authorities. His son caught pneumonia in the immigration detention center.

As he waited in Port-au-Prince for a charter flight back to Santiago, news from northern Chile underscored why he wanted to go to the United States in the first place: A demonstration against immigrants drew thousands of protesters who turned violent and destroyed the belongings of migrants living in a camp.

Would he try to go to the U.S. again? He did not rule it out.

“The risks are so numerous that this shouldn’t be an experience to repeat,” he said. “However, one should never say never.”