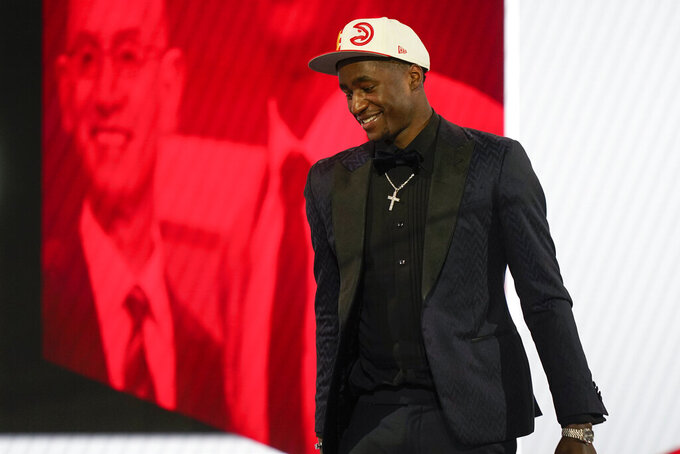 ATLANTA (AP) — Looking to bounce back from a disappointing season, the Atlanta Hawks selected another Duke player in the first round.

Now the question: Is A.J. Griffin just the first of several newcomers who will be joining the team for next season.

Griffin, a 6-foot-6 forward, went to the Hawks at No. 16 overall in the NBA draft on Thursday night.

He was among four players player from the Blue Devils to be picked in the first round, following top overall choice Paolo Banchero by Orlando and Mark Williams going to Charlotte at No. 15. Another college teammate, Wendell Moore, was selected by Dallas at No. 26.

The 6-foot-6 Griffin was the second straight Duke player to be chosen by the Hawks in the first round, following 2021 top pick Jalen Johnson.

“I think we can do something special,” the 18-year-old said. “I’m ready to get to work and ready to get some wins.”

The Hawks traded down in the second round, giving up the 44th overall pick to the Golden State Warriors to acquire swingman Tyrese Martin from UConn at No. 51, along with a reported $2 million.

“We didn't really think he would be there at 16,” Hawks general manager Landry Fields said. "We're excited with what he brings in terms of versatility and a personality standpoint. We couldn't be happier to have him."

Griffin gives the Hawks another 3-point threat and the physical presence to improve a mediocre defense.

“He has a big heart,” Adrian Griffin said. “He has the full package to put on the floor. Obviously he can shoot the ball. He's versatile. He's definitely a really good pick-up for the A-T-L. I'm happy he found a home.”

Griffin, whose progress has been slowed by injuries, averaged 10.4 points and 3.9 rebounds per game on a deep Duke team that reached the Final Four.

Many draft projections had Griffin going closer to the top 10.

He wound up falling to Atlanta with the 16th pick.

“You hear rumors and stuff of where you might go,” Griffin said. “I thought I was going early. That just motivates me even more.”

Atlanta is coming off a season that failed to meet high expectations after a surprising run to the Eastern Conference final in 2021.

The Hawks spent much of the year under .500 before landing a spot in the play-in tournament. Two victories pushed them into the playoffs as the No. 8 seed, but Atlanta went down meekly in the first round with a five-game loss to the Miami Heat.

Owner Tony Ressler conceded the team was too complacent during the last offseason and wouldn’t make the same mistake this summer.

Defensive improvement is a big goal as the Hawks consider whether to keep their young roster largely intact or push for big changes. A complementary scorer for All-Star point guard Trae Young might be another priority.

The Hawks ranked only 21st in the league in scoring defense, allowing 112.3 points per game.

Atlanta went into the draft with a bit of a shake-up in the front office. Fields has been promoted to general manager, though team president Travis Schlenk retains the final say on all player personnel matters.

The Hawks have had good success in the draft since Schlenk took over the front office in 2017, landing Young, John Collins, Kevin Huerter, De'Andre Hunter and Onyeka Okongwu in the first round. Johnson played sparingly in the NBA during his rookie season, but the team likes his long-term potential.

Young may be the only player who is off-limits to trade discussions. Much of the speculation about a possible deal has focused on Collins, a power forward who averaged 16.2 points and 7.8 rebounds last season.

Griffin isn't concerned about all the speculation. He's ready to get to work with the current group of Hawks.

“I think I can make an impact right away," Griffin said.