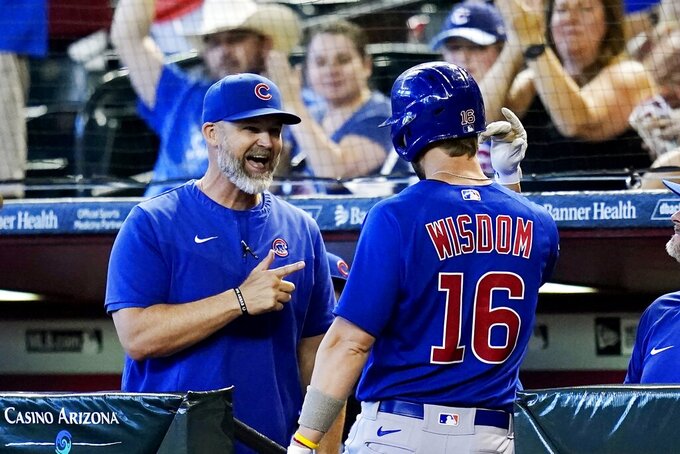 PHOENIX (AP) — Frank Schwindel figured he got the best of the bargain with his broken-bat, go-ahead single.

“I'll trade a bat for a hit any day," Schwindel said.

Schwindel had a tiebreaking single in the ninth inning and the Chicago Cubs beat the Arizona Diamondbacks 3-2 on Sunday.

Patrick Wisdom and Rafael Ortega also homered for the Cubs, who have won four of six after a 3-14 stretch.

Wisdom doubled to deep center field to lead off the ninth against Ian Kennedy (2-2) and Schwindel reached out and hit a soft line drive over first base for his second hit of the game.

Scott Effross (1-1) gave up a single to open the ninth. Rowan Wick allowed a single to the first batter he faced before getting his fourth save in as many chances on a foulout and double-play grounder.

“Frank has had a lot of good at-bats,” said Cubs manager David Ross, noting Schwindel's line out to deep center field in the sixth. “It's kind of funny. That's baseball. You hit a line drive to the warning track and a guy runs it down. Then you break your bat and get the game-winning knock.”

Chicago starter Justin Steele struck out a career-high 10 and gave up one earned run and three hits in six innings. It was his first appearance since being removed from last Sunday’s start after four innings because of thumb soreness.

“The slider was working very well today,” Steele said. “I was able to get a swing and a miss whenever I wanted it. Just one of those starts where I had the pitches I needed working."

Cubs right fielder Seiya Suzuki was 1 for 3 with a double and a walk in his second straight start after missing three starts with an ankle injury.

Suzuki also made two outstanding plays in the field, a sliding catch on Christian Walker’s line drive in front of him in the first inning and a backhanded, over-the-shoulder catch on Josh Rojas’ flyball to the warning track in the seventh.

“Seiya played great tonight,” Ross said. “Really picked us up with his defense.”

Arizona lost its first series in six. The Diamondbacks had won their previous last five one-run games — they are 7-4 in one-run games this season after going was 10-31 in such games last season.

Ortega hit the second pitch of the game for a 428-foot homer and Wisdom led off the second with a 414-foot homer for a quick 2-0 lead off Humberto Castellanos.

Daulton Varsho had an RBI single and shortstop Ildemaro Vargas made a two-out error as the Diamondbacks tied it at 2-all in the fourth.

Walker and Pavin Smith singled to open the ninth before Varsho fouled out and Peralta grounded into a double play started by second baseman Jonathan Villar. Peralta's ball was measured at 107 mph.

“I felt David did a great job,” Arizona manager Torey Lovullo said. “He hit a 107 mile an hour line drive groundball right to the second baseman. We just have to keep plowing. We're going to cut you 100 times to win a baseball game.”

Arizona’s starting pitchers are 8-0 with a 2.00 ERA in the last 15 games after Castellanos gave up two runs and did not get a decision.

The Diamondbacks’ starters have a 2.51 ERA, second-lowest in the majors to the Dodgers (2.45). The teams begin a four-game series in Los Angeles on Monday.

SWING AND A MISS

Castellanos struck out five in a row after getting Willson Contreras on a sharp groundout leading off the Cubs’ third.

Ortega connected on his 31st birthday for his first homer of the season. Wisdom was the last Cub to homer on his birthday, hitting two on Aug. 27, 2021.

Cubs: SS Andrelton Simmons (right shoulder) was activated from the injured list before the game and entered as a defensive replacement in the ninth inning, He had not played this season after feeling inflammation in spring training. ... SS/2B Nico Hoerner (right ankle) was placed on the IL in a corresponding move. Hoerner left Wednesday’s game in San Diego in the second inning when he collided with an umpire while attempting to position himself for a relay throw.

Diamondbacks: RHP Sean Poppen (shoulder inflammation) was activated from the injured list prior to the game. DH Seth Beer was optioned to Triple-A Reno in a corresponding move. Beer, who beat San Diego with a walk-off three-run homer on opening day, was 9 for 61 with no homers in his last 20 games.

Cubs: LHP Wade Miley (0-0) is scheduled to face Pittsburgh RHP Bryse Wilson (0-2) in the opener of a three-game series at Wrigley Field on Monday.

Diamondbacks: LHP Madison Bumgarner (2-1) is to face Dodgers RHP Tony Gonsolin (3-0) in the opener of a four-game series in Los Angeles on Monday.