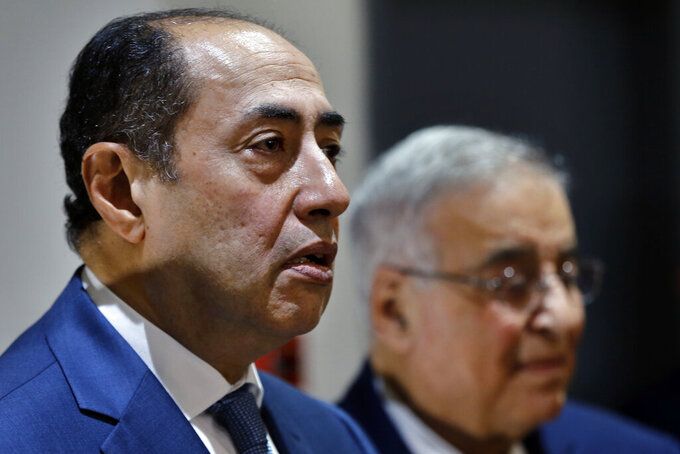 BEIRUT (AP) — A top Arab League envoy was in Beirut on Monday to explore ways to resolve an unprecedented diplomatic rift between Lebanon and Saudi Arabia that emerged following comments by Lebanon's information minister on Yemen's civil war.

The minister had criticized the war in Yemen that a Saudi-led coalition is waging against the Iran-backed Houthi rebels. The Arab League official said his visit was “an initiative to put the crisis on the right track.”

Hossam Zaki, the league’s deputy chief, told reporters after meeting Lebanese President Michel Aoun that he was ready to visit Saudi Arabia but that some tangible moves to ease the crisis have to be felt first.

“The interests of Lebanon and Gulf nations are our goal,” Zaki said, and openly asked what Lebanese authorities “plan to do to end this crisis.”

Zaki said that had Kordahi resigned earlier, it would have ended the crisis from the start “but the situation continued.” He said Lebanese leaders told him during their meetings that the crisis should end and are hoping that Kordahi resigns.

Aoun's office said the president told Zaki that there should be a separation between what the government announces and statements made by individuals, especially if they have no official post Aoun was referring to Kordahi's comments that he made before becoming a minister.

Aoun added that Lebanon is ready to take steps to improve relations with the gulf nations, especially Saudi Arabia, based on mutual respect of sovereignty.

Mikati’s office quoted the prime minister as saying that Lebanon wants normal relations to be rerstored with Saudi Arabia and Gulf Arab nations, adding that the Arab League can play a role in that. Mikati also said Lebanon will remove all obstacles to restore the relations, according to his office.

The spat has threatened to destabilize Mikati's government, formed in September after a 13-month deadlock between rival Lebanese groups.

Mikati has urged Kordahi to “do what needs to be done” — an apparent appeal for him to step down but the minister has so far refused to apologize or resign.

Saudi Arabia has withdrawn its ambassador from Beirut and asked the Lebanese envoy to leave the kingdom. It has also banned Lebanese imports, undermining the small nation’s foreign trade and depriving it of millions of dollars even as it struggles amid an economic meltdown.

Bahrain, the United Arab Emirates and Kuwait have also pulled their ambassadors from Lebanon, deepening the spat.

Kordahi, who was named to the government by a party allied to the militant Hezbollah group, has insisted Yemen’s Houthis have the right to defend themselves and said he did not mean to offend with his comments, which were recorded before he became minister.