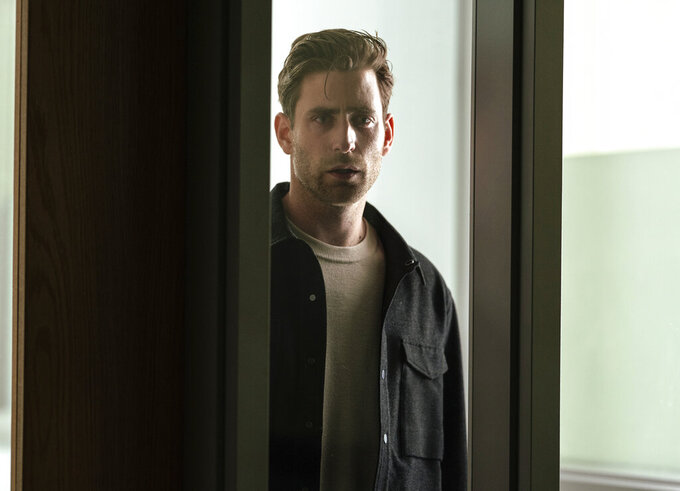 Hey, casting agents, listen up. Oliver Jackson-Cohen is interested in lighter roles. That doesn't mean he hasn't enjoyed the darker, sometimes scarier fare he's mostly appeared in throughout the past few years — but his mother says he needs a break.

Mom's commentary came last year when Jackson-Cohen arrived in Vancouver to film the new series “ Surface ” now streaming weekly on Apple TV+. She said to him, “'You're not going to play one of your sad boys, are you?'

"I went, ‘What?’ She said, 'You're always (expletive) sad. Do something light that I can go and enjoy watching,'" Jackson-Cohen laughed. “So that sort of stuck with me."

It's been a busy few years. Jackson-Cohen's recent career highlights include Netflix's “The Haunting of Hill House” series and its follow-up “The Haunting of Bly Manor." He also terrorized Elisabeth Moss in “ The Invisible Man ” and played Dakota Johnson's controlling husband in “The Lost Daughter.” He did get a respite, however, in this summer's rom-com “ Mr. Malcom's List," an experience he describes as “a joyful romp.”

In “Surface,” Jackson-Cohen stars opposite Gugu Mbatha-Raw as James, a husband desperately trying to keep the pretenses of a happy marriage afloat after an accident caused his wife, Sophie (Mbatha-Raw), to lose her long-term memory. The more James tries to masquerade past problems, the more suspicious and distant Sophie becomes.

“There’s something so interesting when someone’s sitting on a bunch of secrets,” he said. "That creates so much tension, and if you’re not allowed to say certain things and you’re holding so much back, it can be read in a multitude of different ways. Hopefully it’s worked and it does come across as overprotective or controlling or whatever it is — or, sinister. But hopefully, you know, as the show goes on and the layers are sort of peeled, you realize what is all underneath that.”

Veronica West, the creator and showrunner of “Surface," says it's the balance of mystique and likeability that makes “something super special about Olly's performance" in the series.

“He’s got an intensity that can feel very dangerous, but also extremely charismatic and magnetic and draw you in. I remember the first time we got to meet in person. There was a song playing and he started doing a little shoulder dance and I was like, ‘That is the most goofy, charming thing on Earth.’ And we ended up writing it (in a scene,) he seems a little bit menacing in the subtext, but also has this immense charm to him. I think that’s the duality of James.”

Jackson-Cohen says he finds that playing flawed people is therapeutic.

“I don’t know what it says about me, but I’m drawn to the pain that’s in people. I find the release of that incredibly comforting, which sounds so messed up. It really does feel like an outlet which sounds like a complete and utter actor."

For now, Jackson-Cohen is back in Vancouver filming a series for Prime Video called “Wilderness” opposite Jenna Coleman, which he describes as “not lighthearted at all.” Next up, he's hoping there will be another season of “Surface" which he enjoys, in part, because he's known Mbatha-Raw for years.

“I did one of my first ever jobs with Gugu when I was 19. We did like an episode of some very questionable BBC thing, We've known each other since then, and she's such a wonderful human being."