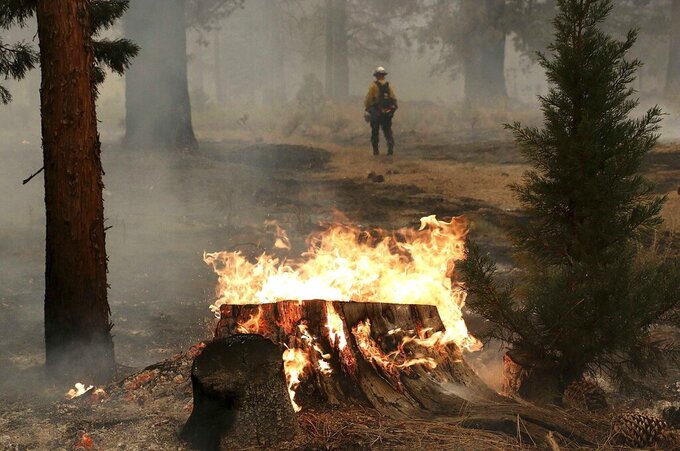 SOUTH LAKE TAHOE, Calif. (AP) — The devastation starts on the western slope. Many of the cabins that once lined the highway between here and Sacramento are now gone. Instead, brick and stone chimneys stand sentinel, visible through blackened toothpick trees that dot the mountainsides. Gray ash on the ground blends with the towering granite cliffs of Lovers Leap. Lines between the dirt path of the Pony Express National Historic Trail and the charred forest surrounding it are blurred.

Between the western slope of the Sierra Nevada and the Lake Tahoe Basin is Echo Summit, elevation 7,382 feet (2,250 meters). The area is pocketed with lakes and cliffs. Instead of the densely packed manzanita and oak that cover the Sierra’s western slopes, fir and pine pepper this summit. The adjacent 100-square-mile (259-square-kilometer) Desolation Wilderness is a hiker’s paradise, with numerous alpine lakes and rocky trails.

Side by side they form part of the Sierra Crest, a natural wildfire barrier that separates the western slope from the eastern slope.

Echo Summit and the Desolation Wilderness should have helped block the fire from encroaching on and threatening the lives and homes of the thousands of people living and recreating in the Tahoe Basin, which straddles the Sierra.

But on Aug. 14, the Caldor Fire started near Pollock Pines, midway between Sacramento and Lake Tahoe.

In just a few weeks, Caldor scorched more than 345 square miles (894 square kilometers), an area larger than New York City, as it traveled more than 40 miles (64 kilometers) toward Tahoe, the largest alpine lake in North America.

The fire forced roughly 50,000 people on the Highway 50 corridor and in the Lake Tahoe Basin to evacuate. Nearly 32,000 structures were threatened, 81 were damaged and almost 800 were destroyed. And the Caldor did something only one fire – the 1,500-square-mile (3,900-square-kilometer) Dixie Fire – had ever done.

It crested the Sierra Nevada, burning from the western slope onto the eastern slope, forever changing what officials and residents know about predicted wildfire patterns.

While the devastation is clear, the damage is still being measured.

Near Echo Summit, about 25 miles (40 kilometers) of the Pacific Crest Trail, Tahoe Rim Trail and other singletrack trails were directly damaged by the fire. Other stretches were harmed in the fighting of the fire, as dozers cleared contingency lines. The main buildings at Sierra-at-Tahoe Resort, one of the closest ski resorts to the Bay Area and Sacramento, were saved. But hundreds of acres of ski runs are now freckled with charred trees. Noticeable damage to Lake Tahoe’s famed clear waters has already been observed due to falling ash the Caldor Fire spewed into the air.

Beyond the tangible loss of structures, natural resources and beauty at Tahoe, Caldor led to the loss of something intangible: A sense of security for many of the thousands of residents who call the Tahoe Basin home.

Patrick Parsel lives in South Lake Tahoe for the same reason so many others do – the area’s beauty and its ease of access to recreation.

Parsel finds that beauty in the hundreds of miles of running and mountain biking trails right outside his door.

But the fire that burned into the Tahoe Basin left some of his favorite recreation areas forever altered. Caldor changed the way he views his home.

Over the years, Parsel worried the forest could ignite. As trails director for the Tahoe Area Mountain Biking Association, he knows well what sections of the forest are filled with dense underbrush that could burn quickly.

But his fear revolved around a fire starting in the Tahoe Basin. So, when the Caldor Fire first started more than 40 miles (64 kilometers) away, on the other side of the Sierra, he wasn’t nervous. Dozens of miles, rocky outcrops and mountain lakes stood between Tahoe and the fire.

When Caldor jumped the crest and rolled toward Tahoe, anxiety built in the pit of his stomach. The fire was making its way toward his home, and there was nothing Parsel could do.

It left him feeling a new kind of vulnerability, a worry he hadn’t experienced living in Tahoe before this fire.

“It’s like tracking a hurricane as it comes closer and closer,” he said. “It was a big wake-up call, not just for people in South Lake, but people all over.”

South Lake resident Kristine Koran felt losses on both sides of the Sierra Crest as she watched the Caldor burn.

Koran, the trail operations manager for the Tahoe Rim Trail Association, lived in Pollock Pines before moving to Tahoe and worked as a wilderness ranger on the El Dorado National Forest.

She watched the fire threaten both her old home and her new home, destroying miles and years of trail work between them.

Last year, she celebrated the opening of a four-year project rerouting the 165-mile (266-kilometer) Tahoe Rim Trail at Echo Summit. This year, Caldor destroyed it.

The Ralston Trailhead near Camp Sacramento on the west side of the summit, a project she worked on with the El Dorado National Forest, is also gone. Koran lost sleep monitoring which trails survived and which ones did not.

Having lived all over the country, she recognizes that living on the West Coast means living with fire.

“As you drive around,” she said, “and look at all the trees and how beautiful everything is, even though they stopped it, everything that didn’t burn could burn next year.”

The fact that Caldor ran up the western slope, crested the summit, and spread down the Sierra’s eastern slope into the Lake Tahoe Basin caught residents and fire experts both by surprise.

At times, the fire grew anywhere from 16 to 63 square miles (40 to 162 square kilometers) per day. With strong gusty winds, it didn’t take long for the fire to blow over Echo Summit, igniting trees surrounded by large swaths of granite.

What was remarkable about the Caldor Fire was how it burned, how dry the dead trees that fueled it were and how easily they ignited, according to Ryan Bauer, fire management officer for the Plumas National Forest. That’s where the Dixie Fire, the second-largest wildfire in California’s history, raged this summer.

Firefighting agencies study fuel moisture and ignition probability heading into wildfire season. In Bauer’s 20 years as a firefighter, this was the first year that the probability of fuel igniting was 100%. This meant any ember blowing ahead of a fire would have a 100% chance of starting a spot fire.

Fire crews across the state were unsuccessful in cutting fires off at their heads, Bauer said, because of devastatingly dry conditions.

Unless a fire ran into sections of forest that had been treated or terrain that could block them, the fires were unstoppable.

“Every bit of fuel was available,” he said. “There was really no way to stop spot fires from starting this year. If you weren’t getting firefighters to a spot fire in the first couple minutes, you weren’t going to get it – it was just going to continue to spread.”

Caldor had no shortage of fuel to help it spread so quickly over Echo Summit and into the Tahoe Basin.

Spot fires from flying embers in wildfires across California were igniting not far from the main blaze, Bauer said. That’s something that only happens during extreme fire seasons.

“Sitting up here on the Plumas, watching the Caldor unfold, we expected it would blow through. That’s the year it was,” he said. “Everybody in fire would probably say, ‘I never thought I would see the day when fire would burn from the west side all the way to the east side of the Sierra.’ That is extreme. But once we saw what the season looked like, it was no longer a surprise.”

WHAT MUST HAPPEN NEXT

The dense trees that ring Lake Tahoe today are the new growth that show what Caldor’s burn scars could look like in a century.

Roughly 150 years ago, the Lake Tahoe Basin was stripped of most of its trees. More than 80% of Tahoe’s old-growth timber had been logged to support growth and mining. That timber formed shafts, frames and tunnels at newly discovered silver mines in Virginia City, just over the Nevada border.

When logging threatened Tahoe’s natural beauty 150 years ago, early conservationists such as John Muir rallied to preserve the lake. A proposal in the 1880s to designate the lake a state park was not well-received, nor were later efforts spearheaded by the Sierra Club for a national park designation.

“The Caldor Fire is hopefully a turning point for the Basin since it’s such a visible fire threatening a natural treasure,” said League to Save Lake Tahoe CEO Darcie Goodman-Collins.

The group’s slogan, “Keep Tahoe Blue,” is well known, and she hopes the nonprofit group can capitalize on its platform and raise awareness for wildfire prevention measures in both the Basin and adjoining forests.

“Everyone has a different personal connection to the lake and … they were concerned how the fire would impact that connection,” she said. “A lot of that is the lake – what is the lake going to look like when I go back there?”

The Caldor and other recent wildfires spotlight the urgent need to create resilient forests and take a new approach to how forests are managed.

Part of that is cutting through “green tape” – the bureaucratic processes that hold up projects to increase forest health, according to Goodman-Collins.

More efforts need to be made, she said, to streamline permitting processes that differ at the local, state and federal levels for these projects.

“If we want to keep Tahoe blue and preserve the Tahoe everyone loves to enjoy in their own way,” she said, “we need to be doing some new things bigger and bolder.”

Over the years, measures have been put into place to protect the lake from outside threats. Boat inspection stations protect the lake from invasive species such as the quagga mussel. Dive teams are removing trash from its bottom. Universities and researchers are studying ways to remove invasive plants and fish.

Now, measures must be taken to protect the lake from aerial threats such as smoke and ash, said Joanna Blaszczak, assistant professor of freshwater ecology and biochemistry at the University of Nevada, Reno.

Creating a regional buffer zone around the Tahoe Basin, similar to how homeowners clear defensible spaces around their homes, she said, could help minimize smoke in Tahoe’s airshed. Fire managers must implement controlled burns in conjunction with manual techniques such as hand thinning to remove fuels, according to Sarah Bisbing, assistant professor of forest ecology at the University of Nevada, Reno.

A “major cultural shift” is needed in the way forests are treated, she said, in order to solve the wildfire crisis plaguing the West.