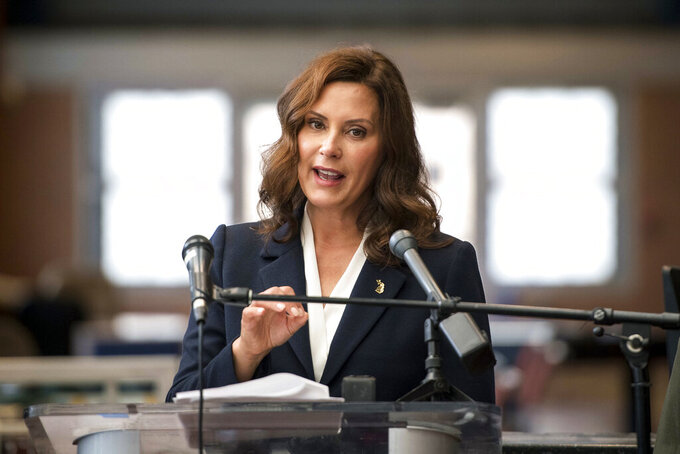 The money was included in the relief law approved by Congress and President Joe Biden in March. It is set to expire next summer and is part of a $2.5 billion supplemental spending request that state budget director Christopher Harkins sent to the Republican chairmen of legislative appropriations committees on Nov. 19.

The GOP-led Legislature returned to session Tuesday after a two-week break. Coronavirus cases

“We'd really like to get that school testing money appropriated sooner rather than later,” said Kurt Weiss, spokesman for the state budget office, saying it has a shorter timeline than other funds. “We would love to be able to help school districts isolate cases more quickly so that the schools don't have to reduce in-person instructional days due to outbreaks."

The Senate plans to begin advancing a $3.3 billion proposal to spend federal infrastructure and pandemic dollars on water-quality upgrades, including $1 billion to replace lead pipes and $680 million for dam safety. The House intends to pass $250 million in public safety spending with a mix of federal and state aid. It is unclear if legislators and the Democratic governor will reach a deal in coming weeks.

House Appropriations Committee Chairman Thomas Albert, a Lowell Republican, told reporters he is negotiating a “technical end-of-year, close-of-books” supplemental bill that is also tied to discussions over the disbursement of non-discretionary federal funding from both Biden's coronavirus relief plan and one signed by former President Donald Trump.

“There's a lot there. We're trying to find areas where we can come together and get that stuff done,” he said.

Albert said the Legislature previously allotted more than $500 million for COVID-19 testing, $210 million of which had not been spent. Much of Michigan's federal relief funding can be spent over multiple years, he said.

“We've been methodical. We've been making sure that we don't just write a blank check and give it to the governor,” Albert said. “Now we're finding different ways we can spend the money. There's possibly an opportunity to use testing funding to help address workforce shortages in our hospitals and different health care providers. We're digging through that.”

The state has a record-high number of hospitalized adults with confirmed coronavirus cases. It had the country's second-highest seven-day infection rate on Tuesday.