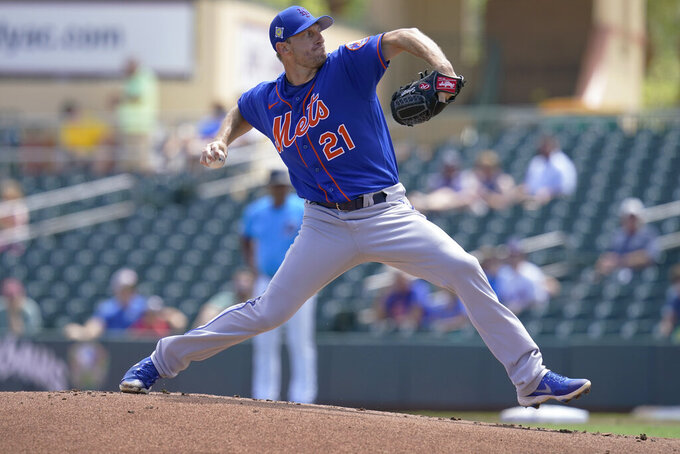 Outlook: After winning 14 consecutive division titles from 1991-2005, the Braves are on another roll with four straight NL East championships. Last year’s win was capped by the team’s first World Series crown since 1995. Atlanta lost Mike Soroka and Acuña to injuries and Marcell Ozuna to an injury and legal problems last year. This year, the major challenge is overcoming the departure of Freeman, the 2020 NL MVP and popular team leader who signed with the Dodgers. Olson, from the Atlanta area, agreed to a $168 million, eight-year contract one day after he was traded to the Braves, signaling the end of Freeman's tenure in Atlanta. Acuña could be back in right field by May. Questions about the back of the rotation could stretch a deep bullpen in the first month, especially when the Braves play 14 consecutive days to open the season before their first off day. The team likely will use six starters during that stretch, creating possible chances for Kyle Muller or Tucker Davidson to make an impression.

Outlook: After their first winning season since 2011, the Phillies are aiming to return to the postseason and snap an NL-worst 10-year drought. The addition of sluggers Castellanos and Schwarber strengthens an offense that already features reigning NL MVP Harper. The Phillies were 13th in runs (4.5), 18th in batting average (.240) and 15th in homers (198) last year. The rotation led by Wheeler is solid and capable one through five. If Nola can return to his All-Star form, the Phillies would have a formidable 1-2 punch. Knebel gives the team a proven closer, while Hand and Familia provide depth in a bullpen that’s been a major problem the past few seasons. Offense should be a strength but defense could be a trouble spot as several regulars are more suited to DH. If the pitching improves and the defense doesn’t fall apart, the Phillies can slug their way back to October baseball.

Outlook: Expectations are high once again following the team’s latest offseason overhaul — on the field and off. Second-year owner Steve Cohen committed nearly $260 million to five free agents during a winter spending spree that positioned the Mets to have baseball’s second-largest payroll (more than $250 million) behind the Dodgers. The highlight was pairing Scherzer with deGrom to form a sensational 1-2 pitching punch that boasts five Cy Young Awards between them. Bassitt, an All-Star with Oakland last year who made a remarkable recovery from a frightening line drive to the face, slots in nicely at No. 3. So if they can stay healthy — Scherzer is 37 and the 33-year-old deGrom didn’t pitch after July 7 last season due to a sprained elbow — the top of the rotation looks transformative. New York signed Marte, Escobar and Canha to boost a lineup that languished in 2021. Star shortstop Francisco Lindor hopes to bounce back from his miserable Mets debut, which came after he got a $341 million contract. Robinson Canó returns at age 39 after sitting out last season while serving his second PED suspension. He could fit at DH. Perhaps the 65-year-old Showalter, a proven winner in four previous big league bench stops including across town with the Yankees, can instill the sort of stability, consistency and professionalism the Mets have lacked. Cohen is counting on it after New York spent 103 days in first place last season — the most ever for a club that finished with a losing record. Is this the year the talent finally clicks, or will age expose a bloated roster on a team prone to critical injuries for years?

Outlook: The Marlins ranked next-to-last in the majors in runs (way too few, 623) and strikeouts (way too many, 1,553) last season, and they know offense was by far their biggest problem. Wendle, García and Soler should help, but the Marlins also know they need improvement from holdovers like Chisholm — who says he studied every at-bat from last season and simply wasted too many of them. Starting pitching shouldn’t be an issue if everyone stays healthy; Alcantara’s record is highly deceiving and Lopez looks as though he added a few pounds of muscle in the offseason. Center field has been a big concern all spring, especially since the Marlins play in a home park that is enormous and a gap-hitters’ paradise. The idea in Miami is to build something sustainable for the long-term, not be a one-year wonder. Jeter’s departure earlier this year wasn’t a complete surprise, and his few words on the topic made clear that he wanted Miami to be a bigger spender and evidently wasn’t getting his way. It’s now up to people he brought in, most notably highly respected GM Kim Ng, to finish the rebuild.

Outlook: Two consecutive last-place finishes and a wholesale reshuffling of the roster at last year’s trade deadline have the Nationals in the midst of a full-on rebuild — or, to use GM Mike Rizzo’s preferred term, “reboot.” Key players such as Max Scherzer, Trea Turner, Daniel Hudson and Yan Gomes were shipped elsewhere and newcomers such as Gray and catcher Keibert Ruiz will be counted on. The 2019 championship could not feel much further away, and there isn’t a lot in the way of remnants of that club, with the notable exceptions of Soto, the 2020 NL batting champion and 2021 NL MVP runner-up, and Strasburg, who’s pitched fewer than 30 total innings since earning World Series MVP honors. Unless and until Washington signs Soto to a long-term contract, his future will be a main topic of discussion. The Nationals brought in Cruz to offer protection for Soto in the lineup, but that was about it in terms of notable additions. There were some familiar names who returned, though, such as Doolittle and Sánchez, both part of the 2019 club and seen as mentors for a young roster. One of many question marks will be the rotation, where Strasburg plans to make a delayed debut after a second consecutive season-ending surgery, and another pitching star of that title team, Corbin, will try to bounce back from a career-worst 2021. One player long associated with the franchise is gone: Zimmerman, who retired in the offseason.