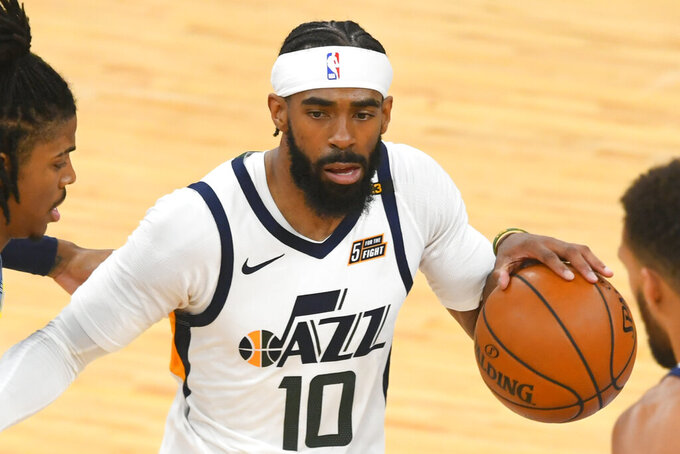 John Amis, ASSOCIATED PRESS
FILE - In this May 29, 2021, file photo, Utah Jazz guard Mike Conley is pressured by Memphis Grizzlies players during the second half of Game 3 of an NBA basketball first-round playoff series in Memphis, Tenn. Conley returned to Utah to help the Jazz finish what they started last season. Conley represents Utah’s biggest signing in free agency, agreeing to a three-year deal worth $68.04 million on the first day free agents could negotiate with NBA teams. (AP Photo/John Amis, File)

Conley represents Utah’s biggest signing in free agency, agreeing to a three-year deal worth $68.04 million on the first day free agents could negotiate with NBA teams. Multiple teams showed interest in luring him away from the Jazz.

For Conley, it came down to wanting to complete unfinished business after Utah lost in the second round of the playoff as the top seed.

’Last year had a disappointing end to it,” Conley said Monday, addressing the media after the Jazz announced his signing three days earlier. “But all the strides we’ve made along the way allow us to come into this season still chasing that championship — that ultimate goal. And it’s something that’s truly attainable. Something we can grasp. We’re right there. We’re knocking on the door.”

Conley said he has made progress in fully healing the hamstring injury that caused him to miss five of six playoff games against the Los Angeles Clippers. That’s welcome news for the Jazz. When healthy, the veteran point guard has been a difference-maker in keeping Utah’s offense composed and efficient.

Last season, he averaged 16.2 points and 6.0 assists on the way to earning his first career NBA All-Star nod. Given what Conley has done with the Jazz so far, coming back made the most sense to him as he weighed his options.

“It’s a comfort zone here,” Conley said. “Somewhere I feel really comfortable. I feel like I can continue to grow, continue to help this team in any way, shape, or form to get to the next level.”

Bringing back Conley was just the first step for the Jazz. Utah also made a flurry of moves to upgrade its bench after last season’s early playoff exit.

The Jazz signed Rudy Gay to a three-year, $18.5 million deal and Hassan Whiteside to a one-year, $2.4 million contract. Additionally, Utah acquired forward Eric Paschall in a trade with Golden State, sending back a protected 2026 second-round pick.

The newest second unit additions give the Jazz an increased scoring punch to compliment reigning NBA Sixth Man of the Year Jordan Clarkson and Joe Ingles. They also give the Jazz improved defensive versatility on the perimeter against small-ball lineups.

Gay previously played with Conley for 5½ seasons in Memphis. He’s excited for a reunion with his former Grizzlies teammate. The veteran forward said he’s also eager to show what he can do in Utah.

Over four seasons in San Antonio, Gay carved out a niche as a reliable shooter and defender on the perimeter. He can guard and play multiple positions.

Gay felt drawn to Utah, in large part, because the Jazz stood out as the team with the greatest need for his specific offensive and defensive skills.

“When you’re looking for a team or looking for a place to play, that’s the biggest thing,” Gay said. “At the end of the day, I just want to be a resource that teams can use. I feel like I can be the greatest asset here.”

Similar thoughts compelled Whiteside to join the Jazz instead of re-signing with Portland. The Blazers showed interest in bringing back Whiteside — their starting center during the 2019-20 season. Ultimately, he could not pass up a chance to make a championship run with Utah.

“It’s a great fit for me,” said Whiteside, who fell out of the rotation with Sacramento late last season. “I haven’t been this excited in a long time. They’re definitely a contender. You don’t accidentally win 50-plus games in this league.”