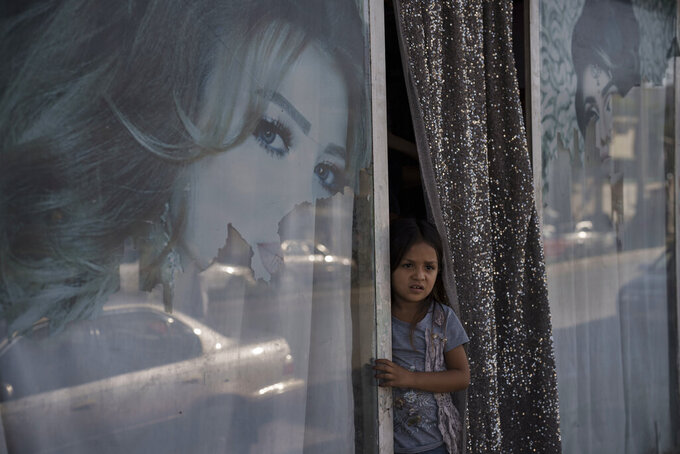 Felipe Dana, ASSOCIATED PRESS
An Afghan girl looks out from a beauty salon in Kabul, Afghanistan, Thursday, Sept. 16, 2021. Since the Taliban gained control of Kabul, several images depicting women outside beauty salons have been removed or covered up. (AP Photo/Felipe Dana)

KABUL, Afghanistan — The Taliban have sacked the executive director of Afghanistan’s cricket board.

Hamid Shinwari posted on his official Facebook page Monday he had been fired by Anas Haqqani, the younger brother of the Taliban’s new Interior Minister Sirajuddin Haqqani.

He said he was not given any reason for his dismissal, but was told he would be replaced by Naseebullah Haqqani.

It isn’t clear if the new Afghanistan Cricket Board chief is a relative of Sirajuddin Haqqani, who is sought by the FBI for questioning in connection with several high profile attacks on Kabul during the Taliban’s 20-year war with successive U.S.-backed governments.

The official Facebook page of the Afghanistan Cricket Board also announced Naseebullah Haqqani as the new executive director.

WASHINGTON -- The U.S. State Department has confirmed that a Qatar Airways flight flew 21 U.S. citizens and 48 permanent residents out of Afghanistan on Sunday.

State Department spokesperson Ned Price said in a statement Monday that the U.S. will continue to help citizens, permanent residents and Afghans affiliated with the U.S. government to depart Afghanistan.

Price says: “We are thankful to Qatari authorities, who continue to coordinate these flights with the Taliban.”

— Fearful US residents in Afghanistan hiding out from Taliban

BERLIN — The U.S. military says it has completed an effort to vaccinate evacuees from Afghanistan against measles, mumps, rubella and chickenpox at two sites in Germany.

The military’s 86th Airlift Wing said Monday the shots were administered to more than 8,800 evacuees over three days “out of an abundance of caution” and at the request of the U.S. Centers for Disease Control and Prevention.

The vaccination drive at the Ramstein Air Base and the nearby Rhine Ordnance Barracks was completed on Sunday. The military says it was faster than the four to five days originally envisioned for it.

U.S. authorities earlier this month halted U.S.-bound flights of Afghan evacuees from Germany and Qatar, another major transit point, after discovering a limited measles outbreak among Afghans arriving in the United States. The military at Ramstein says there has been only one confirmed case among its current evacuee population.

The 86th Airlift Wing statement said that “Ramstein is equipped to expeditiously resume flights once given approval to do so.”

Thirteen schoolgirls, 15 to 18 years of age, gathered in a residential area on Herat’s outskirts — a neighborhood where the Taliban have no presence — so as not to draw their attention. A few local journalists invited by the girls covered the rally.

The protesters held banners demanding to be able to return to school, saying that barring girls from education would leave an entire future nation uneducated.

“We ask them (Taliban) to reopen our schools as soon as possible,” said one protester, Nargis Jamshid, 17. She added that not going to school feels as if “we are moving backward.”

“We demand that all girls must return to their schools and all the women should be allowed to get back to their work,” said Sharaara Sarwari, 18.

After taking power in Afghanistan last month, the Taliban initially said girls would be given equal access to education, albeit in gender-segregated settings, and promised inclusivity but have since imposed several restrictions on women.

On Sunday, female employees in the Kabul city government were told to stay home, with work only allowed for those who cannot be replaced by men. On Friday, the Taliban-run education ministry ordered boys from grades six to 12 back to school, starting Saturday, along with male teachers — but made no mention of girls in those grades returning to school.

In their previous rule in the 1990s, the Taliban had barred girls and women from schools, jobs and public life.

The claim, published late Sunday on the militant group’s media arm, the Aamaq news agency, signals a growing threat to the Taliban by their long-time rivals.

At least eight people, including several Taliban fighters, were killed in the attacks on Sunday and Saturday in the provincial city of Jalalabad, an IS stronghold.

The Taliban seized control of Afghanistan in a blitz campaign last month, overrunning the capital of Kabul while U.S. and NATO were in the final phase of withdrawing their troops. The last foreign soldiers left Aug. 30.

The Taliban now face major economic and security challenges in trying to govern Afghanistan, and an accelerated campaign of IS attacks will further complicate those efforts. The Taliban and IS extremists were enemies before foreign troops left Afghanistan.

Both groups subscribe to a harsh interpretation of Islam, but the Taliban have focused on taking control of Afghanistan, while IS affiliates in Afghanistan and elsewhere call for global jihad.

ISLAMABAD — Pakistani security forces said they killed in an operation on Monday a notorious Pakistani Taliban commander suspected of involvement in the killing of four women teachers in a former militant stronghold in the country's northwest.

A military statement said Saif Ullah was involved in the February attack in the town of Mir Ali in North Waziristan province, which borders Afghanistan, when the four teachers were gunned down while traveling in a car.

The military said the suspect was also involved in past attacks on Pakistani security forces, construction engineers and kidnappings for ransom in the region.

The Pakistani Taliban, who are a separate militant group from the Afghan Taliban, have for years waged war against the government in Islamabad. They were also behind the 2012 attack that wounded Malala Yousafzai, who in 2014 became Pakistan’s Nobel Peace Prize laureate for her work as an advocate for young women’s education. Malala is the youngest person to be awarded the Nobel prize.

There are concerns that the Pakistani Taliban are becoming emboldened after the Afghan Taliban last month took power in Afghanistan as U.S. and NATO forces were in the final stages of their pullout from the country. Militants in Pakistan in general have in recent months stepped up attacks in North Waziristan, raising fears they are regrouping in the area, a former Taliban stronghold.