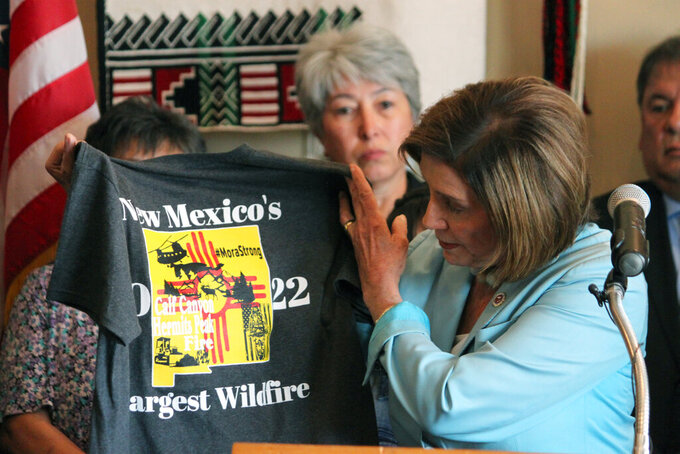 Susan Montoya Bryan, ASSOCIATED PRESS
U.S. House Speaker Nancy Pelosi holds up a T-shirt that was given to her as a gift following a roundtable discussion related to the effects of wildfire during a visit to Albuquerque, New Mexico, on Monday, Sept. 26, 2022. Pelosi acknowledged that the federal government needs to do more to help make residents of northeastern New Mexico whole after the largest wildfire in the state's recorded history burned several hundred homes and destroyed livelihoods earlier this year. (AP Photo/Susan Montoya Bryan)

ALBUQUERQUE, N.M. (AP) — U.S. House Speaker Nancy Pelosi said Monday that the federal government has to do more to help with recovery in the wake of a devastating wildfire that charred several hundred homes and destroyed the livelihoods of many rural New Mexico residents.

The largest fire in the state’s recorded history was sparked earlier this year by two government-planned prescribed burns. It forced the evacuation of thousands of residents from villages throughout the Sangre de Cristo mountain range as it burned through more than 530 square miles (1,373 square kilometers) of the Rocky Mountain foothills.

The blaze forced the U.S. Forest Service to review its prescribed fire polices before resuming operations. Experts have said the environmental consequences will likely span generations.

Fresh off a weekend of campaigning for Democratic House candidates in New Mexico, Pelosi met with more than a dozen residents affected by the fire.

She hinted that a government spending bill pending in Congress could serve as a “very big start” to make residents whole. She would not put a price tag on the relief package and said it will be a matter of identifying the right sources from which to pull the funding given that everything from agriculture to water quality and small business were affected.

“I’m sorry for what you have been suffering, recognizing the time that it’s going to take,” Pelosi told residents gathered around the table. There were farmers, local elected officials, high school students, forestry experts and irrigation specialists.

Some residents talked about sleepless nights worrying about whether the next rainstorm would wash more ash and debris down from the barren mountainsides. They talked about the difficulties of getting around given that some bridges have been washed out by post-fire flooding. Some areas still lack telephone lines, and there are streams where they used to fish that have become polluted.

Many residents also have voiced frustrations with federal emergency managers as they apply for aid, saying they don't understand the culture of rural New Mexico.

“There was a recognition this was avoidable, and that makes it shameful. But that makes it all the more reason for us to learn from it immediately,” Pelosi said, adding that FEMA will need to mitigate its response since many homeowners lack deeds or other required paperwork.

U.S. Rep. Teresa Leger Fernández, a Democrat who represents the area charred by the wildfire, invited Pelosi to New Mexico to hear from families. She has been a driving force behind legislation to fully compensate those who suffered personal injury or loss of property, business or income as a result of the fire.

For the region's economic hub — the community of Las Vegas, New Mexico — the fire put drinking water supplies in an even more precarious position. Drought and aging infrastructure already were problems, but debris and ash flowing down the Gallinas River forced the city to seek emergency funding to install a temporary treatment system.

Mayor Louie Trujillo reiterated that “the government was 100% responsible for this monster of a disaster.” He asked Pelosi to ensure the relief legislation gets through Congress.