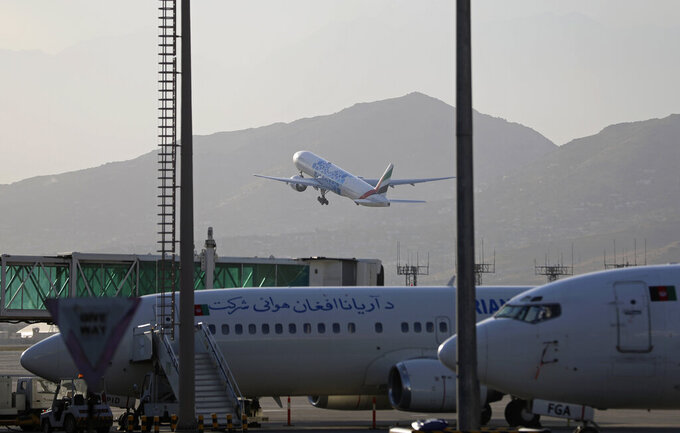 Rahmat Gul, ASSOCIATED PRESS
A plane takes off from Hamid Karzai International Airport in Kabul, Afghanistan, Sunday, July 4, 2021. As America’s “forever war” rapidly winds down, the U.S. Embassy and other diplomatic missions in Kabul are looking at a worsening security situation and how to respond. There is still no deal on securing operations at Kabul’s international airport, a prerequisite for a continued presence of foreign diplomats and aid workers in Afghanistan. (AP Photo/Rahmat Gul)

KABUL, Afghanistan (AP) — As the end to America’s “forever war” rapidly approaches, the U.S. Embassy and other diplomatic missions in Kabul are watching a worsening security situation and looking at how to respond.

In the countryside, districts are falling to the Taliban in rapid succession. America’s warlord allies are re-arming their militias, which have a violent history, raising the specter of another civil war once the U.S. withdrawal is finished, expected in August.

A U.S. Embassy spokesperson told The Associated Press that security assessments are frequent these days. Speaking on condition of anonymity in line with briefing rules, she said the embassy is currently down to 1,400 U.S. citizens and about 4,000 staff working inside the compound the size of a small town.

A well-fortified town, that is. Besides its own formidable security, the embassy lies inside Kabul’s Green Zone, where entire neighborhoods have been closed off and giant blast walls line streets closed to outside traffic. Afghan security forces guard the barricades into the district, which also houses the Presidential Palace, other embassies and senior government officials.

The only route out is Kabul’s Hamid Karzai International Airport, currently protected by U.S. and Turkish troops. Before America can declare its war over, the security of the airport will have to be settled. Ankara is in talks with Washington, the United Nations and the Afghan government to decide who will protect the airport and who will foot the bill.

For now, the airport is running without interruption, except for restrictions imposed by a deadly third COVID surge that has prompted some countries to suspend flights to Kabul. However, India is not one of them — as many as eight flights arrive weekly from India — and as a result, the virus’ delta variant, first identified in India, is rampant in Afghanistan.

In Kabul, it’s common to hear speculation about when and if the U.S. Embassy will evacuate and shut down, with images resurrected of America’s last days in Saigon at the end of the Vietnam war.

Already, long before the last U.S. and NATO troops began packing to leave, American diplomats arriving at the airport were taken to the heavily fortified U.S. Embassy by helicopter. The 4-mile road trip through Kabul’s chaotic traffic was considered too dangerous.

Suicide bombers struck along that road with uncomfortable frequency.

For many of Washington’s new diplomats to Afghanistan, their view of the country and Kabul is limited to what they see from the confines of the sprawling embassy compound, hidden deep inside the Green Zone and protected by 10-foot blast walls, heavily armed U.S Marines, explosive-sniffing dogs and cameras at every corner.

An American employee of Resolute Support, the name of NATO's military mission in Afghanistan, who arrived in the country last November, had not been outside the giant gates of the mission by June.

Citing security concerns, the U.S. spokesperson said she couldn’t reveal evacuation plans, or even if that’s a part of today’s conversation, but said the embassy has detailed plans for every scenario to protect its staff.

If there is an evacuation, it wouldn't be the first.

The U.S. Embassy in Kabul shut down in 1989, when the former Soviet Union left the country after negotiating an end to its 10-year invasion of Afghanistan. The pro-communist government collapsed three years later, followed by a brutal civil war carried out by most of the same U.S.-allied warlords who still operate in Kabul today — another reason why fear of a new civil war resonates.

The Taliban have issued statements saying they are not looking for a military takeover of Kabul. Washington has repeatedly warned that a military move on the Afghan capital would return the insurgent movement to pariah status, denying it international recognition and assistance.

Still, not long after President Joe Biden announced in mid-April that American troops would be gone by Sept. 11, Afghan President Ashraf Ghani expressed concern that Afghan forces might not be able to protect all the diplomatic missions in Kabul, according to an official familiar with the discussions. There were even suggestions that smaller embassies move into the U.S. compound for their protection.

On April 27, the U.S. Embassy’s chargé d’affaires, Ross Wilson, tweeted that non-essential U.S. personnel would leave. The spokesperson would not say how many people left under that order, saying only that staff numbers are constantly being assessed.

Wilson blamed the departure on “increasing violence & threat reports in Kabul.” He also posted a U.S. Embassy site warning to all American citizens to leave Afghanistan immediately on any available commercial flight. And to Americans planning to visit Afghanistan, the order was clear: don’t.

The Australian Embassy closed, and most other Western embassies reduced their staff.

“They said they were going on R&R, but that was just so as not to create panic among their local staff, but they were leaving for their security reasons,” he said.

The exodus prompted the Taliban to issue multiple statements assuring aid groups and Afghans working for Western organizations they had nothing to fear.

But that hasn’t reassured interpreters who worked for the U.S. military. The spokesperson said some might be evacuated from Afghanistan but relocated to a third country while their immigration visas to the U.S. are processed. Thousands of applications are in the pipeline. Thousands more that were denied are being appealed.

The Taliban’s quick successes in northern Afghanistan, particularly the rapid surrender of Afghan soldiers in several instances, has heightened security fears in Kabul, where the presence of the heavily armed warlords resurrects images of the 1990s civil war.

Marshal Rashid Dostum, an Uzbek warlord accused of war crimes, some against personal enemies who were once his allies, holds a military base on a hilltop overlooking Kabul's posh Wazir Akbar Khan neighborhood. His militia has an uneasy relationship with Ghani’s government and other powerful warlords, including the new Defense Minister Bismillah Khan.

Heavily armed guards patrol Wazir Akbar Khan streets, lined with marble mansions of government officials, many of them former warlords. Though united today against the Taliban, they have a brutal history of fighting each other.

For some, a Taliban play for Kabul seems inevitable.

“After the takeover of the districts and some provinces, the Taliban will make a try to enter Kabul,” said Torek Farhadi, a former adviser to the Afghan government. “They will face the regular army, but also the warlords who have accumulated huge wealth out of war related contracts.”